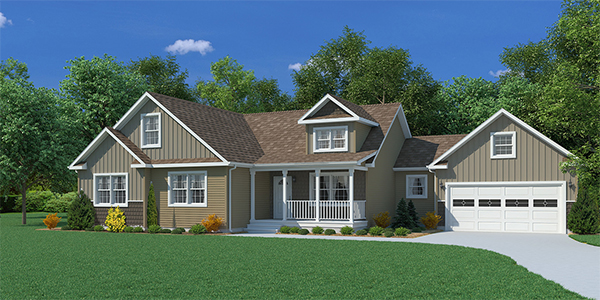 By bringing construction into the factory, manufactured housing industry leaders such as The Commodore Corporation of Goshen, Ind., have continued to keep the dream of home ownership alive for millions of Americans. Approximately 19 million people now live full time in more than 8 million manufactured homes across the nation.

With six plants in three states, The Commodore Corporation is a major participant in a $16.4 billion industry that provides over 25 percent of new housing starts in America today.And, according to the U.S. Census Bureau, sales of large multi-section homes as wide as 42 feet represent almost two-thirds of all manufactured housing purchases. Still, excluding land costs, the average price of a manufactured home in 1998 was just $43,800, compared to the average cost for a site-built home of $136,425.

Looking at these facts and figures, it is clear that the manufactured housing industry has virtually saved the day for those who otherwise could not afford to own a home. But the growth of The Commodore Corporation and that of the industry in general can be attributed to much more than simple cost-effectiveness. According to Bill Glick, vice president of marketing and sales for Commodore, it is the value, not the affordability, that increasingly appeals to consumers of today, and it is Commodore’s emphasis on value that attracts and keeps the company’s customer base. Until manufactured housing came on the scene, methods of home construction, one-by-one, on site, from the ground up, remained the same for centuries, except for the change from grass and clay to bricks and lumber.

The advent of modern manufacturing and the assembly line gave birth to the idea of creating homes in a factory. Following World War II, due to the ever-increasing demand for single-family housing, the industry evolved from building “trailers” to the attractive, architecturally pleasing housing of today. This evolution has reached the point where some manufactured homes, such as many of those built by The Commodore Corporation, when completed and in place with the property improved, cannot be distinguished from a site-built home.

As for interior and exterior features and details, manufactured homes offer a literally thrilling array of all the most exciting design and decor trends available in the housing marketplace. Commodore home buyers, for example, can select from exteriors that feature such architectural highlights as high-pitched roof angles, dormers, and arched windows and bays. Inside, amenities include step-down rooms; deep crown moldings; wide hallways and doors; beautifully appointed kitchens with recess-hinged, designer-styled, solid-wood cabinetry and center islands; and grand bathrooms with decked garden tubs and designer drapery treatments. These are but a few of the recent features that Commodore’s retailers are showing their prospective buyers in a variety of models in home centers across America. “In fact,” Glick says, “Commodore offers more optional features than probably any other manufacturer in the industry.”

Once the prospective home buyer is interested in the appearance of a manufactured home, the retailer can point out the many benefits, in addition to lowered cost, of factory construction. The factory offers a sheltered, controlled environment where materials are never exposed to the elements. Further, continuing inspection by experienced supervisors as each part of the home is constructed is much more consistent than the methods employed for homes built on site.

Some quality control, however, emanates from beyond the level of the independent manufacturer. The most dramatic change for Commodore and all other manufacturers came 24 years ago in 1976, when the U.S. Department of Housing and Urban Development (HUD) created a national code of standards. It clearly defined the construction of manufactured homes to be residences, not vehicles. This action made the term “mobile home” obsolete, and gave a new term, “manufactured housing,” to the industry. All manufactured homes are now built according to the HUD code, which often is more stringent than state and local building codes.

Another value inherent in the manufacturing process comes through the opportunity for cost efficiencies due to high-volume purchasing of name-brand raw materials, appliances, hardware and building supplies. All who purchase one of Commodore’s Colony, Manorwood or Commodore homes, for example, can be assured that their homes also include brand names such as General Electric® appliances, Alcoa® vinyl siding, Congoleum® flooring, Johns-Manville® insulation, Wilsonart® laminates, Nordyne® furnaces and Coronet® carpeting. Name brands at a moderate overall price spell value to today’s consumer.

Overall, consumer understanding of the value inherent in manufactured housing has created the unprecedented, fast-paced growth over the past decade. Some companies, unwilling or unable to meet the demands of both the government and the consumer, have left the business. Not so with The Commodore Corporation, which is privately owned by its president and CEO, Barry Shein. Since assuming leadership of the company, he has kept the long-standing corporate tradition of rapid innovation, delivering far more than the minimum requirements.

A number of the company’s innovations have become industry standards; for example, the method of connecting heating ducts in multisectional homes, introduced by Commodore, is now commonly used. Commodore was among the first to offer homes shipped with dry-wall construction, one of today’s most desired features in manufactured housing. More recent innovations include Commodore’s new saddle roof, which adds interesting exterior detail and provides the ceiling for a front porch. Recently, Commodore’s engineers also designed an attic, adding nearly 200 square feet of additional storage space to certain models of Commodore homes. Commodore debuted this industry first at a fall show, so Glick anticipates that very soon competitors will start putting attics in their homes. He says, “That’s just the way the industry is. Nothing stays exclusive very long.” Glick explains that Commodore accepts this as a fact of life. “The rapid assimilation of new ideas keeps the industry healthy. We have found that buyers who seek the newest, most trend-setting features eventually end up looking into a Commodore home, and this drives us to keep coming up with new ideas. That is Commodore’s strength.”

In the industry, most manufacturers position their plants to deliver within a few hundred miles, which helps control transportation costs. The three Commodore divisions at Goshen, Ind.; Clarion, Pa.; and Danville, Va., build manufactured housing and some modular homes at their plants. Colony Factory Crafted Homes, at Shippenville, Pa., a separate division, offers a full line of manufactured homes in the Northeast. Manorwood Homes at Pine Grove, Pa., is a modular home builder serving the Eastern states. The entire network of retailers served by these divis-ions includes 25 states in the Northeast, on the mid-Atlantic coast, and in the Midwest, as well as several locations in Canada. Each division has considerable autonomy, balanced with corporate direction.

Each Commodore Corpora-tion plant has its own sales team and is able to respond to regional variations in consumer needs. Glick says, “We are a company that is large enough to be financially very stable. Yet we are small enough to remain responsive and flexible. These qualities are an imperative for continuing success today and in the coming years.”

Glick explains that the company’s long-range goal is to maintain its high standards for all products over the full range of price points, to continue to strive for innovation and, above all, to respond to the needs of home buyers. Backed by a loyal, experienced work force, The Commodore Corporation is focused on maintaining its leadership role as manufactured homes take a steadily increasing share of the housing market in the new century.