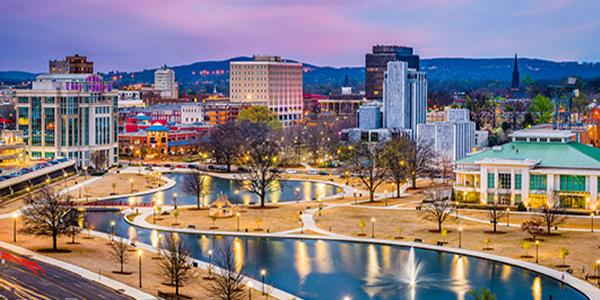 Huntsville was courting the Toyota Board of Directors when they came visiting to size up the area as one of several possible sites for their new manufacturing plant when the president of the giant automotive OEM asked how they could be assured that the work force possessed the technical aptitude for making engines reflecting Toyota’s s signature quality. Obviously, it was their first trip to Huntsville.

“We told them that if we can build an engine to take a man to the moon we can build Toyota’s engines,” recalls Huntsville Chamber of Commerce President Brian Hilson.

So what do they think they are in Huntsville? Rocket scientists?

Well, pretty close. Celebrating its bicentennial this year and founded in 1805 as a cotton, farming and textile community, Huntsville is a rare jewel in the south, having encouraged technical and engineering achievements long before the Southeast took its critical turn late last century as a force within the manufacturing community. And it was, in fact, a group of rocket scientists that gave the city this edge and in the 21st century Huntsville remains a mecca for accomplishment and an attractive area in which to do business.

Rocket men
It all began on July 3, 1941, when the War Department announced that a site on the southwestern edge of Huntsville had been selected as the location for a new chemical munitions manufacturing and storage plant, to be called Redstone Arsenal, in close proximity to another army compound, Huntsville Arsenal. Following the end of the war in 1945, production at the arsenals ceased, their futures in limbo, but by 1949, life was restored after the Army found that it needed both tracts for the new rocket and missile program that would be based at Redstone.

“In the late 1940s after World War II, the U.S. and Russia were essentially competing to attract German rocket scientists who had developed the German World War II missile program,” Hilson relates. The U.S. won the contract as well as members of the famed team, among them the distinguished Dr. Wernher von Braun. At the same time Huntsville had been in the running for a wind tunnel project that eventually went to Tullahoma. “As a consolation prize we were redesignated for the German rocket team in Redstone,” Hilson says.

In retrospect, it would seem to have been first prize. By 1958 the U.S. had based its rocket program at Redstone (the Pershing missile was among the developments during von Braun’s tenure) and on July 1, 1960, von Braun and his team were transferred to the National Aeronautics and Space Administration (NASA) and became the nucleus of the George C. Marshall Space Flight Center at Redstone Arsenal. The center headed up development of propulsion technologies, and was instrumental in developing the space program and putting man on the moon.

As Hilson stresses, “Huntsville community leaders knew that they had good the fortune of these rocket leaders, which helped them early on to think globally.”

Go flight
Huntsville, best known as “America’s Rocket City” and named one of Forbes’ 10 best cities in which to do business, has built its reputation as a national power in missile defense intelligence. But it is also a community founded on vision. When space spending slowed, the community realized it needed to diversify its economy and took action to attract new companies, a number of which relocated here in the 1970s and 1980s. To further its place it established a research and engineering university, the University of Alabama at Huntsville, and a science/technology park that became the second largest in the United States and the fourth in the world. The city is now home to 225 companies that span 3,800 acres and employ a total workforce of 25,000.

“Last year was our best ever with over 5,400 announced jobs in defense, aerospace, electronics, IT and other, areas – 50 percent of those jobs were in manufacturing and the rest is in engineering and technology services. We feel good about our successes,” Hilson says. “Our philosophy is that we want to continue to grow and be less reliant on federal government contracts and continue to expand our research and industrial parks.” In this vein a recent milestone for Huntsville was its announcement of the Hudson Alpha Institute for Biotechnology, a $30 million facility to be located in Cummins Research Park, which Hilson predicts will be “truly a world class biomedical research center with an emphasis on cancer research.” (The center is named after Jim Hudson, a homegrown Huntsville scientist whose career path was influenced by the proximity of the space program.)

In announcing the plans, officials said they expect the institute to create 900 jobs, not including unspecified numbers of spin-off jobs from other biotech firms and support services. Hudson said he expects the institute to create 500 to 600 jobs between 2007 and 2008, with a combined annual payroll of $37 million. A number of other industrial parks are planned as well.

The best of all worlds
At the foot of the Appalachians (the chain ends at Huntsville) the area’s backdrop comprises gently rolling hills and large flat areas – the valleys that encom-passed Huntsville’s cotton and farming community and are now the bucolic setting for a 21st century manmade vision spanning state-of-the-art technology, research and development.

Among the companies that have decided to site businesses in Huntsville is International Diesel, manufacturer of medium-duty truck engines for International and Ford. In Huntsville since 1999, the company’s plant began producing engines in 2002. Jim Mitchell, business team leader, human resources, was the first person hired to work on the project. “We chose Huntsville because of the high tech nature of the workforce and the quality of the people – we wanted to make sure we had well-educated people.”

Likewise, John Mathews, human resources manager at Engelhard, a surface and material science company, said finding a highly educated workforce was important. Engelhard has had a facility in Huntsville since 1974 involved in the design and manufacture of catalytic converter technology. “We have found here a workforce that is well educated with an excellent work ethic,” Mathews says. “This is a manufacturing-friendly environment – that’s one of the most important aspects of being here.”

As a relatively small community (under 400,000) Huntsville is nonetheless known relatively well to companies and individuals who have reason to do business here. And the attributes are many: as one, Huntsville International Airport is one of the largest in the Southeast in land, and has international air cargo capability with direct non-stop to and from Europe, Mexico and Asia. “There is a lot of international trade capacity here,” Hilson points out.

“We often find ourselves presenting the community as a good place to live; once people are here they want to stay here,” Hilson says, adding that 45 retired generals have chosen to make Huntsville home. “The quality of our workforce is at the top of the list of what makes Huntsville attractive for businesses.” Other factors that play into the mix include a cost of living that is well below the national average with a relatively high level of income, he adds, noting: ‘Our reputation more and more proceeds us; we have a strong image we can build off of. Targeting well-planned growth in 30 years has given us this advantage of having technology assets. I feel our best years are ahead.”