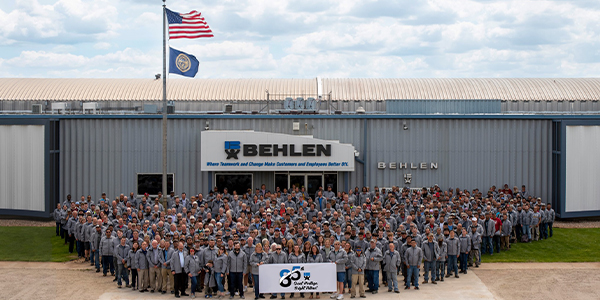 Behlen Mfg. Co. is a leading manufacturer of livestock equipment, grain storage, drying and handling systems, as well as a leading manufacturer of metal building systems. Its evolution has been 70 years in the making. And it’s a milestone that company executives celebrated with a big party – a weeklong party, in fact. Festivities included an open house for the company’s employees, which Behlen calls “Partners in Progress”; an open house for the community, tours illustrating the company’s history and displays of the plant, visits from U.S. Senator Ben Nelson and Congressman Tom Osborne; a visit from the company’s partners from China and the annual company picnic to cap the week. There were also various raffles and other events for workers. “We’re very proud of our company and our history, and this is something we wanted to celebrate,” says company Chairman Tony Raimondo.

The Behlen history is a diverse and creative one, starting in 1936 with its founding by Walter D. Behlen. At that time, Behlen made steel toe caps for work shoes and reusable clamps for wooden egg crates. In 1950, the company expanded into a new market, making self-framing building systems that were popular in the recreational, commercial and industrial markets.

In 1969, the Wickes Corporation acquired Behlen, a situation that lasted until 1984. During that time, Wickes introduced a new management style and made Behlen a division of a larger public corporation. Since it was Wickes’ sole intention to grow as large as possible, and to increase volume as quickly as possible, much money was moved from Behlen to Wickes, in order to fund the latter’s plans. According to Raimondo, this left little for Behlen’s capital improvements, which quickly became a large problem.

In 1984, Behlen was a failing company that needed to be saved. That’s when Raimondo came in, along with Sandy Sigaloff, the newly appointed CEO of Wickes. “Fortunately,” Raimondo says, “Wickes followed through on its commitment to stand behind Behlen, and funded an expansion program including $6 million of capital over 12 months. This was as much in one year as the corporation had received in the previous 12 years,” he adds. Raimondo turned the company around, charting 15 consecutive years of consistent growth between 1985 and 2000.

Employees come first
This growth, however, was not without turmoil. Employees at the time were disgruntled by Wickes’ management style. In 1975, workers voted to join the United Sheet Metal Workers Union. When Raimondo came on board, employees were skeptical that his management style would be any different than that of his predecessors. However, he was able to prove them wrong, and in 1983 Behlen employees voted to decertify the union.

Behlen has grown and broadened its horizons under Raimondo’s leadership. And he’s done much of his work with the assistance of his Partners in Progress. Behlen moved from an authoritative business model to what Raimondo terms a “participative model.”

“We started by eliminating time clocks from all work areas,” Raimondo says. “We trust each individual to record his or her individual work hours in a company-wide honor system.” Raimondo also instituted the AIM (Awareness is Money) system, which is a productivity improvement program. In addition, all Partners in Progress are eligible for gainsharing, which is paid monthly, and profitsharing (annually). Raimondo believes in horizontal management to involve people at all levels. He has instituted a search for continuous improvement and learning, focusing on the company’s customers; and maintains a conviction that all business units will pursue a value-added strategy for customers.

Besides trying to win over employees, Raimondo had to deal with the recession suffered in the U.S. in 2000. Raimondo believes that the manufacturing recession lasted until 2003, and “dealt a serious blow to the U.S. manufacturing segment.” Behlen accomplished yet another turnaround after the recession, thanks to the company’s dedicated Partners in Progress. This turnaround has led Behlen to where it is today.

Since 2001, the transition team or “new generation” as referenced in the Behlen History Book, has been leading the company. Phil Raimondo and Tony Raimondo, Jr. are co-CEOs and, with Lyle Burbach, manage the day-to-day activities of Behlen Mfg. Co. With a good heritage and great future, the new generation will continue to lead the industry in delivering customer satisfaction.

Logistics is an important part of Behlen Country’s business, according to Raimondo. “We have formed a partnership with our suppliers and customers that I see as crucial to staying competitive in the U.S.” Raimondo says.

Another of the Behlen business units is BMC Transportation, used mostly to transport Behlen Country products. This branch is an authorized contract and common carrier licensed for general commodities in 48 states and the Canadian provinces. “We’ve grown from 25 to 100 owner-operators,” Raimondo says. “Today we travel more than 10 million miles per year serving our customers. We see our truck drivers as ambassadors to all our customers, and as key strategic partners in delivering Behlen Country products to more than 4,500 retail outlets,” Raimondo notes. “We encourage products shipping directly to retailers, rather than to a warehouse,” Raimondo adds.

Behlen Building Systems, which is led by Phil Raimondo, entered the market in 1950 with a self-framing building known as the S-Span. Raimondo explains that this product soon became known for its strength and durability. The company has grown to the point of offering pre-engineered metal buildings for malls, offices, airport hangars and other commercial applications. Also a part of the building group is Inland Buildings, located primarily in the Eastern U.S. “Product commonality between Behlen and Inland has allowed the building group to be more efficient, yet still maintain a unique brand identity,” Raimondo says. “We wanted to add Inland so we had manufacturing capability in the Eastern U.S., with a well-known brand and dedicated, hard-working people.” Inland manufactures its products from a 175,000-square-foot plant in Cullman, Alabama.

Grain Systems’ current market presence includes exporting products to more than 70 countries. With more than 96 percent of the world’s consumers living outside the U.S., IDP recognizes the opportunity to contribute even more significantly to standard of living improvements in developing countries. An adequate food supply is the foundation for maintaining a satisfied, productive population. The Grain System group is positioned to serve a significant role in this development.

Strip joining presses, which were developed in the 1960s, continue to be a thriving product line today. These hydraulically operated machines join together the ends of two coils of steel and are used in coil coating and coil line production operations throughout the world. Custom Fabrication, the third product line in the IDP umbrella, focuses on key customers for whom Behlen provides a competitive advantage through its manufacturing and customer service processes. Typical products include electrical utility pole reinforcement systems, communication towers, and park furniture.

Finally, a more recent venture is Behlen China. This company started in 2002 with a 160,000-square-foot plant in Beijing. It provides a full range of metal building systems to all segments of the growing market in China. Behlen China was Raimondo’s dream since the early 1980s. “After exporting for more than 20 years, we saw the need to manufacture inside China to keep doing business in the market. We are positioned to provide exceptional customer service and quality products for the growing China market,” Raimondo says.

So what does the future hold for Behlen? Nothing but good things, according to Raimondo. “We have ISO: 9001 certification, which gives us an international quality standard,” he says. “We’re enhancing our export capabilities all the time. And we finished 2005 with sales of $180 million, and are on target to go over $200 million in sales for fiscal year 2006.”