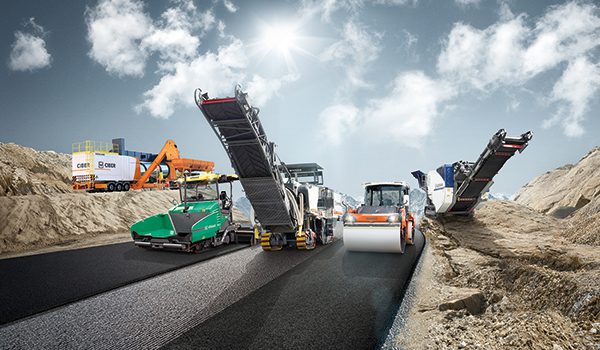 The years 2015 and 2016 saw a sharp drop in infrastructure investment both in Brazil and in Latin America as a whole. The reverberations were deafening for the construction industry – especially for road building. Equipment production in Brazil fell by 58 percent in 2015, in comparison to 2014 and dropped a further 64 percent, in 2016.

Ciber kept a firm hold on a 33 percent of total sales of maintenance and road building equipment in Brazil. It is considered the absolute frontrunner in the milling and recycling segments, with in excess of 90 percent market share. Despite the crisis, Ciber continues to be an international benchmark in asphalt; milling, recycling, crushing and paving.

It is All Relative

How did Ciber not only survive but also sustain investment? President and CEO of Ciber, Luiz Marcelo Tegon explains: “2014 was a good year for the industry. Our revenues were in excess of $250 million and staffing levels reached 500 – but then everything crashed. Road building in Brazil was among the hardest hit with an 84 percent drop in total industry sales in the last 24 months. ”The percentages represent a fall from 2,350 machines in 2014 to 385 in 2016. “Obviously, no one remained unscathed, but with the support of the Wirtgen Group, Ciber was able to adjust sales and structure to withstand a 60 percent decrease in revenue – still 20 percent above market losses.”

In relation to the market as a whole Ciber is a strong survivor.

As an expanding and international group of companies doing business in the construction equipment industry, Germany-based Wirtgen is a technological leader. With five well-known brands in road construction and repair, mining and minerals as well as recycling and building materials. The complete portfolio of the group, offering the most innovative solutions, as well as strong financial structure is certainly a part of the support system.

“Our asphalt plants have been an important catalyst in the growth of the company,” Tegon continues. Since its beginning 58 years ago, Ciber has sold more than 1,800 plants in four continents. The brand is well established throughout Latin America and gaining momentum in Africa, South East Asia, Australia and New Zealand.

Reacting to the changing environment, supported by experience and extensive research, Ciber has developed a revolutionary plant that adapts completely to components and requirements of different asphalt mixes. The new iNOVA® 2000 achieves maximum, constant productivity regardless of input characteristics.

The technology combines the mobility of Ciber’s asphalt plants with the high production capacity that the market demands. The plant, which is easily adaptable to different construction sites, is on two chassis and produces between 100 and 200 tons. Transport, as well as installation costs are considerably lower than plants of comparable sizes. The iNOVA® has also been developed for minimizing the energy required for drying aggregates. Variable dryer drum rotation speeds and automatic control technology for gas flow result in lower fuel consumption. Ciber’s Total Air burner ensures that only the air required for the combustion is heated in the drum, also resulting in lower fuel usage.

“Ciber plants have always been at the forefront of automation systems, featuring industrial computers with adequate strength to the work environment,” says Tegon. The robust, durable equipment incorporates touch screen interfaces and digital data transmission systems. In addition to these technologies, iNOVA® 2000 introduces the new EasyControl® system, which makes operation much more intuitive and user friendly.

A Bright Light at the End of the Tunnel

Thanks also to iNOVA, Tegon has a positive outlook moving forward. “Next year we predict 10 percent growth on 2016’s figures,” he says. His forecast positions annual revenue for the coming year in the region of $80 million. In addition to the new technology and maintaining leadership, he cites increased exports as another solution to weaker domestic markets.

“No one could have predicted the tsunami of political, criminal and economic scandal that crashed onto Brazilian shores. Most of Brazil’s biggest construction companies were brought down by the Operation Carwash corruption witch-hunt and subsequent plea bargains threaten prominent politicians with imprisonment. The result was a tremendous fall in credibility, confidence and investment. At Ciber we have a positive outlook. We came close to rock bottom but we believe the wave has steadied and things will only get better,” Tegon explains.

His formula for success is surprisingly straightforward: innovation and exports plus improved economy minus political corruption.

In a successful attempt to save markets, Ciber increased its exports to more than asphalt plants, including some products such as compactors and milling machines from the Wirtgen Group in Germany. The company is confident that a continued 21 percent rise in exports in 2017 will boost revenue growth.

A brighter future for the market leader does not seem so far away. Ciber has an 85 percent share in some equipment sales and a 90 percent share of the recycling material market. While the wheels of Brazilian finances seem to be stuck in a spin, Ciber is motoring toward the finish line. Despite this, Tegon is confident that the Brazilian economy will grow by 0.5 to 1 percent in 2017 – a welcome improvement on the recession in 2016.

Crisis management that involves investment and shows Ciber’s confidence in its leadership and products. With the worst behind it, the road builder that beat the odds is one to watch.