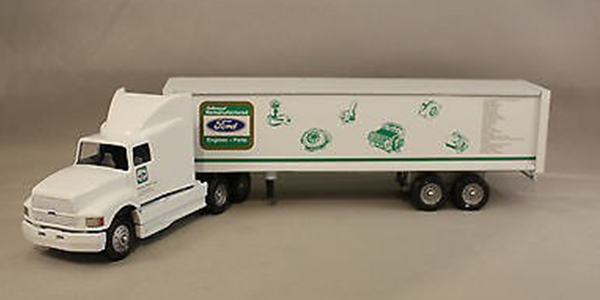 Suppose you and your wife had decided in 1946 to rebuild auto parts in the basement of your home and drive to various Ford dealerships to sell the parts.

You began with carburetors, fuel pumps and distributors and became so effective at what you did, your competition decided they had to buy you out so they themselves could stay in business. And when that happened you diversified your product line, handed your business to your heirs, established your own label and eventually grew to a multi-million-dollar concern serving many of the top automakers.

This is what Clyde and Ann Ensor did in Louisville, Ken. Today, their business, Hesco Parts, supplies not only Ford but DaimlerChrysler, Mercedes Benz as well as others. Son Larry Ensor is vice president; one of several family members – children and grandchildren – actively involved in the privately held company. Clyde Ensor, now 80, comes into work every day to maintain a vital role in the business he and his wife founded.

The family’s ties to Ford started with Ensor’s grandfather, who had moved the family to Louisville to work at a Ford dealership when Clyde Ensor was eight years old. A tinkerer with an aptitude for piecing together mechanical parts, Clyde got his wife involved in his venture and together, says his son, “They built the parts at night and my father would drive around and sell the parts to Ford dealers during the day.”

In the 1940s, he adds, Ford dealers around the country rebuilt auto parts and sold these to other dealers, effectively their competition, a circumstance that did not sit well with these businesses. In 1950, Clyde Ensor began to receive remanufacturing work from Ford and was so effective at what he did, the various dealers who transacted with this entrepreneur went to Ford to ask, as his son Larry puts it, “how to get Ensor off their back.”

“They bought him out and he ran the (Ford) dealer rebuilding business and in 1956, he took it out from the dealers into a separate building.” At this point, Ford had established separate remanufacturing locations around the country, wanting also to separate these from the dealerships. However, by the 1990s only 16 Ford remanufacturing facilities remained active.

Exponential growth
Hesco’s product offering has expanded substantially from the three it began with to more than 40 other lines. The company, employing 165 people, continually expands its product lines as new items are researched for remanufacturability. Each of these lines is remanufactured using the highest of standards available to automotive parts distributors, fleets, and OEMs.

“We take the old engine, tear it down, clean it, discard the pistons, the bearings, and the worn parts, clean the crank shaft, and replace the piston rings, bearings and then test it to make sure it meets all the correct standards and specifications,” Ensor explains.

The company also rebuilds starters, alternators, pumps, master cylinders, and air conditioning units, among a vast array of other car parts; it maintains two warehouses off site where it stores old engine cores. These facilities, in Ramsey, N.J., Knoxville Tenn., and in Louisville, total about 200,000 square feet. (The New Jersey location was established to provide quick product availability to customers in the Northeast and allow for easy export shipments from some of the world’s busiest shipping ports.)

Driving toward quality
As the business grew, Hesco decided to make itself completely independent and place its own private label on its remanufactured parts. It was a decision that opened doors for the company but in the current economic climate, with competition from China heating up, Ensor finds the remanufactured parts business increasingly pressured to compete on a whole new level.

“It used to be when we got parts from China the quality wasn’t there; now it is,” he says, because these manufacturers have learned that to compete globally they, too, must become ISO and QS certified. “China will be big competition,” he says.

But the Ensor family knows how to compete and the breadth of its product line, coupled with more than 50 years in the business, are the tickets to keeping the business on track. Constant modernization of its 300,000-square-foot facility has enabled it to build enduring, quality parts. The company also makes it possible for dealers to tap into its extensive inventory online, a necessary and convenient way to order parts.

All of the product Hesco remanufactures is processed under one roof using state-of-the-art machining, assembly, and test equipment along with 100 percent quality testing to help maintain the highest of grade levels. The company’s Louisville location is centrally located and is within a one-day drive to more than 80 percent of the population in the United States. Louisville also is the home of the UPS airfreight hub that allows quick and efficient product delivery anywhere in the world.

Committed to supplying world class, defect-free products on time that will meet or exceed customer expectations at competitive prices, Hesco employs continuous improvement of processes, services, and systems, Ensor says. The company is third-party QS 9000/ISO 9002 certified by KPMG and is audited every six months by KPMG to ensure quality systems meet the stringent requirements set forth in the QS 9000 quality standard.

Retaining its ties to Ford – the company also owns the All-State Ford Truck Dealership in Louisville – Hesco has become a highly driven operation through the years, proving that a simple husband-and-wife team and a penchant for delivering distinctive products can propel a business into becoming a leading supplier. As the Ensors and their employees turn the corner into a new century, their business promises to follow that established road into even more diverse markets.