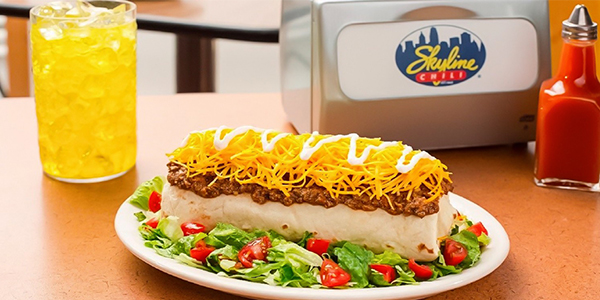 As Nicholas Lambrinides taped his ceremonial first dollar onto the wall of his very own restaurant – the dream of many a Greek immigrant in 1949 – he gazed out his back window at the budding skyline of Cincinnati and knew what to call his restaurant: Skyline Chili. Little could he have known that the chili he would serve at the neighborhood restaurant would come to be a better-known symbol of Cincinnati than the skyline itself.Like the cheese steak is to Philadelphia, deep-dish pizza is to Chicago, and bagels are to New York, Cincinnati-style chili belongs to a special class of comfort foods that are unique to a particular city and have become part of its character – natives that move away pine for the taste of home and insist to anyone who’ll listen that “you’ve never had one until you’ve had one like they make’em back home.”

Skyline Chili is what is known as Cincinnati-style chili. Not to be confused with Texas-style chili, which has beans and is served in a bowl, Cincinnati chili is meatier, beanless, and is served on top of other foods. The code word for the classic dish is a “three way,” which is spaghetti, covered with chili, topped with a mountain of shredded cheddar cheese and eaten with oyster crackers. There’s also a four-way, which adds onions or beans, and a five-way, which has both onions and beans.

While Cincinnati-style chili probably predates Skyline Chili, Mr. Lambrinides unquestionably made it what it is today. Drawing from recipes learned from his mother and grandmother while growing up in Kastoria, Greece, Lambrinides refined his chili for years before opening his restaurant. It wasn’t an immediate hit – chili with Greek seasoning, served on spaghetti was considered a bit odd. But once it caught on, Skyline Chili became a citywide addiction.

Hot stuff
With three of his five sons, Lambrinides opened his second restaurant in 1953; expansion began to accelerate in the 1960s, and now there are 130 Skyline Chili restaurants throughout the Ohio/Indiana/Kentucky tri-state area; large cafeteria operations at corporations like General Motors and Ford and growing franchises in Michigan, Pennsylvania and Florida. Ohioans who leave the area are known for retaining their affection for Skyline chili – Bob Hope, raised in Cleveland, reportedly had cases flown regularly to his home in Palm Springs, Ca.– and to satisfy them Skyline ships to order and distributes through national grocery chains such as Kroger, Winn-Dixie, Meijer, Super Value and Publix.

With legions of Skyline loyalists spread out across the country, depending on their Skyline chili tasting as good as it did back in Cincinnati, the production challenge for Skyline was to deliver enough product through both local and national channels without compromising the original blend of flavors that make Skyline Skyline – a family recipe that is still secret, and kept in a safe.

The answer was to produce all of Skyline’s chili in a single, state-of-the-art, 45,000-square-foot plant in Fairfield, Ohio, a Cincinnati suburb, operated under the guidance of veteran food technologist Ken Davis, the first food technology graduate from Ohio State in 1963. Davis joined Skyline in 1991 to build a modern facility, staff it and train people.

The manufacturing process starts with 100,000 pounds of beef, delivered fresh each week from North Carolina, where specially managed herds are slaughtered and packaged to Skyline’s specifications. Skyline grinds the beef in 500-pound stainless steel vats, using a proprietary pressurized air process that’s designed to extract tiny bits of bone that are present even in certified “boneless” meat.

When the grinding is complete, automated hoists dump the contents of the vats into 3,000-pound steam-jacketed kettles where the four-hour cooking process begins, according to a family recipe that’s been used for decades. “The process of cooking the chili is as secret as the blend of spices itself,” says Davis, “but I will tell you that there are seven ingredients in our products, none of which you can’t pronounce, and you have to add the spices in a certain order to get the right characteristics.”

After cooking, the chili is in the hands of “Chili Meister” Tom Ransick, who oversees a computer-controlled process for testing the chili using detailed standards for thickness, meatiness, acidity and other specifications. The final test is the oldest and most reliable, and the most pleasurable part of Davis’ job: “I get to taste the chili every day.”

After it’s OK’d in both culinary and scientific terms, the chili is pumped into a 2000-gallon holding tank, where it’s blended thoroughly. “We fill that at least three to four times per day,” says Davis. “It’s a lot of chili.”

Next an automated packaging system sends an electronic signal to the “chili pumps,” which move the chili through a series of heat exchangers to drop its temperature from 165 degrees to 37 degrees Fahrenheit. All the chili is packaged at 37 degrees or below. From there, half the chili is shipped fresh to its restaurants, and half is canned or frozen for shipment to grocery stores and mail-order devotees around the country. The plant ships between 180,000 and 240,000 pounds of chili per week, and the entire process can be run by just 11 production employees.

Don’t mess with the recipe
Skyline has traditionally kept its restaurant menu simple and loyal to its core competencies; in addition to the original chili recipe, in the 1950s the restaurants added “Coneys,” which are chili on hot dogs with mustard and onions. Add cheese and they’re known as a “Skyliners.” In recent years chili-themed burritos, baked potatoes, French fries, salads, and a kids’ menu were also added. To satisfy distant customers desperate for their Skyline fix, the company has a mail order “crave kit” and a “fanatics pack”.

Skyline has also kept its growth simple, steadily adding franchises and moving outward as their chili catches on. After Nicholas Lambrinides death in 1962, his three sons ran the business until they retired in 1994. Skyline was acquired by the investment firm Fleet Equity Partners in 1998, and since then the expansion has continued into Michigan, Pennsylvania, and Florida. With a solid core of Ohioan retirees and tourists, Florida has the most Skyline Chili parlors of any state outside its home area.

The continued devotion of its faithful customers is taken very seriously at Skyline, which has a “Customer Hall of Fame.” Before they retired, the Lambrinides brothers used a mantra they learned from their father, one that still resonates with Davis
in his modern facility: “Don’t mess with the recipe.”

For Davis, now in his 14th year at Skyline, the commitment to use state-of-the-art production controls to guard the sanctity of a legendary old-world recipe makes for the perfect job. “I love chili. I love my momma’s chili, I love Skyline chili. When I had a chance to come work for this company I knew it was perfect for me – I mean, it’s a job requirement to eat this chili every day.”