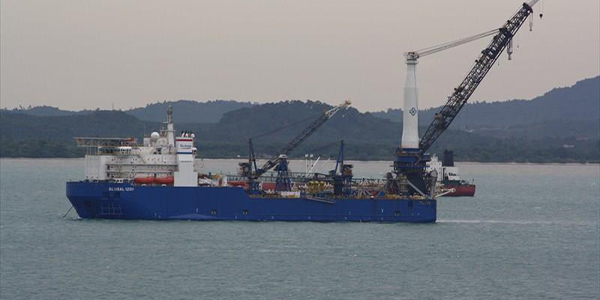 s oil and gas reserves become depleted around the world, the need to tap into unexplored territory has made it necessary for companies to go where no man has gone before. For more than 30 years this has been the mission of Global Industries. Based in Carlyss, La., the company, founded in 1973 as a small diving firm, has grown into a leading supplier of pipelay, structural installation, diving, and support services that are crucial in producing offshore oil and gas.

Employing a vast spectrum of state-of-the-art construction and marine support services, Global has devised technologies that enable companies to reach depths that, not too long ago, were unreachable. Explains Senior Vice President Byron Baker, “There has been a lot of enhanced technology in the last few years, enabling companies to find oil fields in deeper water.” Traditional methods had enabled exploration and drilling, on one level, from the continental shelf to 1,000 feet deep; the second level extended from 1,000 to 5,000 feet. Now companies, with the help of computer-enabled robots and machines, can reach the unheard of depth of 10,000 feet. And it would seem such ability comes in the nick of time, as the areas that have served as the bounty for oil and gas are fast being depleted and more sources need to be found.

Exploring new territory
Global has put together an engineering, research and development, and operations team that has been able to master many of the capabilities necessary to develop oil and gas resources at such extended depths. The vast array of sophisticated technologies includes:

• Reeled pipelay, an advanced technology used to reduce time in an offshore pipelay process. Pipelines are assembled at an onshore spool-base facility and spooled onto a reel mounted on the deck of a pipelay barge. Reeled pipelay provides faster installation
with fewer costly weather delays than conventional pipelay in addition to onshore pipeline assembly in a stable and safer work environment with reduced labor costs.
• Automatic welding technology, a time-saver in the pipeline assembly process that produces higher quality welds over conventional welding. The technology uses a computer with preset welding parameters and a gas metal arc welding (GMAW) process that drives welding units around the pipe joints. Additional time is saved offshore when automatic welding is used in conjunction with conventional pipelay.

But technical aptitude is not the only area in which Global excels; the company maintains a fleet of 18 marine construction vessels around the world, all with lift capability. Global also has 15 dive support vessels, four crew boats, three offshore support vessels, and five cargo/ launch barges.

Such aptitude has enabled the company to score a number of “firsts” within its industry. Some of the most recent include:
• 2001: laid 214 joints of 40-inch pipeline in 24 hours as part of Brunei Shell’s Ampa Fairley Rationalization Project;
• 2002: executed spool and world’s first reel pipelay installation of continuous bonded insulation in 10-inch Pipe-in-Pipe (PIP) for Shell’s Manatee project in over 2,000 feet of water;
• 2002: installed largest hot taps (two 36-inch by 36-inch) in Mexico’s Bay of Campeche for PEMEX’s EPC-45 Project:
• 2003: laid 12 percent chrome pipeline (12-inch diameter) as part of Marathon Oil’s Alba Phase 2 Project in Equitorial Guinea:
• 2003: installed 96 miles of 18-inch pipeline in up to 3,150 FSW for Williams’ Gunnison Project;
• 2004: laid 10 kilometers of 14-inch 316-clad corrosion resistant alloy pipe for Sarawak Shell/Nippon Steel’s Serai Project in Malaysia.

A full service provider
Because of its diversification, Global (NASDAQ: GLBL) has been able to position itself as a premier contractor for shallow, intermediate, and deep-water projects around the world. The company maintains a quality management system that is fully aligned with the requirements of ISO 9001:2000 and other applicable codes and standards to ensure a high level of quality and safety for employees, customers, and the environment. This management system reflects accepted standards for the effective monitoring, control, and maintenance of all processes relating to the safety and quality within the company.

To follow its customers, which include all the major oil producers, to the far corners of the world, Global has established offices in Asia Pacific, West Africa, the Middle East, India, and Mexico in addition to its Houston office; the company has performed extensive work of late for Mexico’s PEMEX and, following Florida’s tumultuous hurricane season, found its services were in desperate need, especially in the wake of Hurricane Ivan.

“We are a full service company from beginning of the development of an oil field to the end of the field,” Baker explains. “In today’s industry, when a well is depleted, companies need to recover the infrastructure. So our service extends from cradle to grave – project management, engineering, salvage and abandonment – everything that’s required for companies, and we have done extensive work for all the major firms, including ChevronTexaco, BP and Shell Oil, even the small independents.”

And going into such far-flung areas of the world has brought with it a unique set of challenges; Baker adds, “Every area is different, and needs to be dealt with differently, as far as cultures, geography. In the Gulf you have many advantages” he explains, because of the close proximity to urban centers. Heading into locations effectively in the middle of nowhere can bring with it an array of demands in terms of logistics, and even government regulations.

But as its name implies, Global Industries is more than prepared to get to work, even in the most isolated locations on earth.