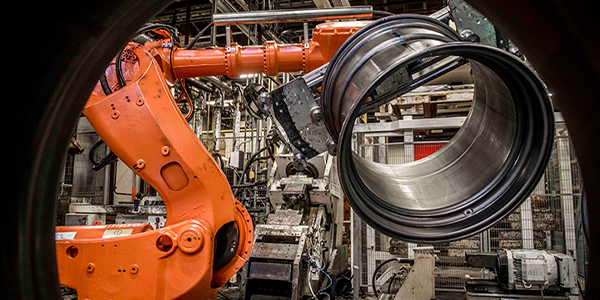 There have been many jokes over the years about inventing the wheel, but a company called GKN Armstrong Wheels Inc., has been steadily re-inventing wheels for its customers at a brand-new research facility outside of Chicago.

At its new North American new research center, a research and development team of about 10 engineers works closely with its heavy equipment customers – mainly big names in tractors and heavy equipment such as Caterpillar and John Deere – to develop the most efficient rims and discs, that save money on raw materials while operating at top effectiveness.

“We’re using R&D to reduce the manufacturers’ cost – that’s really what the focus is,” said Steve Hands, vice president of sales and marketing for GKN Armstrong, which is based in Iowa, “so that you can make the same wheel with less material. A wheel’s got to be round to fit the tire, but where the innovation comes in is in the shape of the steel rim and the round disk.”

Indeed, the center, which opened in December 2004, came on line just as prices for steel and other commodities were soaring, meaning that the research done at GKN Armstrong’s new facility could offer substantial savings to its customers.

“The testing allows us to optimize these designs rather than the conservative approach of putting on more material than is necessary,” Hands said. He laughed that the sharp rise in steel prices “made us look like geniuses.”

A change in focus
Actually, the success of the North American research center is just one more example of the aggressive approach that the company has taken toward growing its business since it was purchased in 1998 by British-based global wheel leader GKN.

The purchase allowed the new GKN Armstrong to shift its focus past the smaller wheels for off-road construction or agricultural vehicles and to start manufacturing and marketing wheels for the heavier pieces of equipment that are the staple of customers such as Caterpillar.

Hands said the company was launched as Armstrong Wheel about 30 years ago and for its early history it focused exclusively on small wheels – less than 24 inches in diameter – for what the industry calls “short liners,” which are smaller pieces of agricultural equipment for seeding and the like. That was before GKN purchased the company about eight years ago.

“What they’ve done is that they already owned two wheel manufacturers in Europe prior to the acquisition and after they acquired another wheel company in Italy they now operate as a global wheel maker,” Hands explained. “We have a marketing agreement with a Brazilian wheel manufacturer and now we’re looking at opportunities in China.”

In order to manufacture wheels of up to 54 inches in diameter for the big players like Caterpillar and John Deere, the newly dubbed GKN Armstrong built a new plant in Estherville, Iowa, which is about 120 miles away from the town of Armstrong. In addition, the new British-based parent company has invested in a small specialty wheel plant in Wichita, Kan., as well as a hub and spindle manufacturer based in Jackson, Ohio.

Help from Washington
The various expansion moves has increased the number of employees at GKN Armstrong to roughly 400, Hands said. Currently, the company’s largest customer is Caterpillar, followed by John Deere and then Case and Holland. In the meantime, several trends in the marketplace have aided the company in its ambitious growth plans.

Some of the most positive developments have come on the legislative front in Washington.The new federal transportation bill that was signed into law in 2005 allocated a whopping $286 billion for highway and related projects over the next six years and is expected to create a large bull market for construction vehicles and equipment. The same is true for up to $200 billion in additional federal spending that is expected to both clean up the damage and to rebuild homes and businesses along the Gulf Coast that were destroyed by Hurricane Katrina.

Likewise, the sharp rise in commodity prices has been a double-edged sword for GKN Armstrong. While higher steel prices have meant a much higher cost for manufacturing wheels – costs that the company has been forced, to some degree, to pass along to its customers – it has also led to a dramatic rise in the amount of mining and quarrying activity, increasing demand for off-road vehicles.

“One of the things that has really affected equipment makers is that our wheels are 100 percent steel, and steel prices have gone through the roof,” Hands said. “We’ve had to work with our customers on the costs and pricing, because to make a profit we have had to pass these cost increases onto our customers.”

That’s where the new research facility in Illinois, within two hours of the headquarters of its three biggest customers, comes into play for GKN Armstrong.

“We opened it last year in response to our customers’ needs for lower costs and more cost effectiveness and innovative products,” Hands explained. “So we invested several million dollars in test equipment that is world class for the testing of new designs for more cost-effective wheels. That means either taking material out of the wheels or innovative ways of shaping steel.”

Massive equipment
Hands said there are roughly 10 engineers at the new facility involved with the research and development, as well as some key account executives. Among the equipment they utilize is a drum machine that exerts pressure on wheels up to the point of failure, helping GKN Armstrong to determine how much steel is necessary for a new wheel design.

The other key device, according to Hands, is a cornering machine that simulates the stresses and strains that a wheel will go under right up to the breaking point. “These two pieces of equipment are the largest of their kind; they’re massive,” he enthused. “We can test wheels that people haven’t even dreamed of building.”

That innovative approach, coupled with the push to build larger wheels at its new Estherville plant, has enabled GKN Armstrong to grows its sales by an astounding five-fold since the company was acquired seven years ago.

With its high-tech ways and innovative approach, GKN Armstrong is one industrial company that is rolling faster than ever into the 21st century.