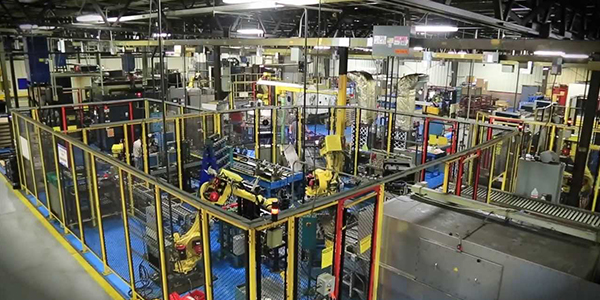 What propels companies is the ability to adapt to changing needs. What moved Engineered Machined Products (EMP) forward, from the depths of decline in 1990, was an infusion of capital from a group of new investors combined with engineering strategies that sought new ways to always put the customers’ needs first. “Our development engineers understand customers’ needs and focus on what they’re lacking,” says Dave Allen, vice president of product development.

EMP built its business on manufacturing oil, water and fuel-pump components, the products that had originally put the company on the map. But changes — such as redesigning a high-pressure oil rail that holds and distributes oil to injectors — became one of the engines that drove the company beyond its prior successes. “This industry is close-knit and, once word of our success got out, it had a domino effect. That success gave us the opportunity to run more products,” Allen says.

EMP demonstrated its talents at re-engineering products again in 1997, when a customer sent a pump and asked the company to make it more efficient and longer- lasting Allen recalls saying to President and Chief Executive Officer Brian Larche, “Wouldn’t it be nice to design a pump that meets today’s engineering needs?” Pumps today, according to Allen, are made pretty much in the fashion of their counterparts from 100 years ago. “That’s when we came up with the electric-pump concept,” he explains. “We redesigned the pump so that its frailties have gone away. It’s the most efficient, robust design and we’ve gained a lot of worldwide recognition from it.” Right now, the design can only be used in specialty applications such as drag-racing engines, because the standard car battery does not put out the needed power. But Allen suspects the entire industry will be upgraded for the new part within the next 10 years.

“Many new products,” he explains, “are electrically driven and all of them need motors. We’re now looking at switched reluctance motors that have no magnets because magnets cost a lot of money and they have a limited life.” He adds that newer technology is also computer-intensive and, in the last three years, computer-chip technology has gotten fast enough to bring about fast solutions, particularly in the manufacture of pump products. To help foster growth in this area, EMP has acquired certain intellectual property rights from Texas A&M University and has joined with Texas Instruments, which makes chips, for the development of digital signal processors to help drive the pumps.

EMP also engineered an improved diesel water pump in 1994 and grew from one customer, with only 5 percent of the diesel engine water-pump market, to 65 percent of the market. Needless to say, adds Allen, “We have a lot of experience with water pumps.”

Reinventing Itself
Such advances in pump technology have not come without a significant change in philosophy and managerial strategy. As North America’s leading producer of engine cooling pumps for the diesel engine — and having transformed itself from a generalist contract manufacturer to a focused and specialized full-service provider of manufacturing and engineering solutions — EMP has itself risen from bad times.

Until 1990, the company was owned by Freudenberg and Company, which was headquartered in Germany, and was one of the auto industry’s largest suppliers of torsional vibration control dampners (TVDs). EMP provided Freudenberg, a large producer of rubber products, with an opportunity to open the door into the TVD market, when it was purchased in 1979. EMP diversified into pumps in the early 1980s, although pumps were not a core business for Freudenberg.

In 1990, Freudenberg consolidated is noise and vibration companies with a Japanese competitor, forming Freudenberg-NOK to service the U.S. market. It became obvious that EMP’s pump technology did not contribute to the new company’s strategic goals, and it began searching for a potential buyer. In 1991, a group of investors led by Larche purchased EMP for many reasons, but a major objective was to keep jobs in the local area. Slowly, through Larche’s foresight and leadership, EMP got back on track with one main client, Navistar International. By 2000, EMP was on the road to prosperity, having risen from near ashes to achieve more than $115 million in sales. It also went from leasing a small building in the early 1990s to constructing a new and modern facility in 1997, which now measures 256,000 square feet. EMP also maintains a 60,000 square-foot building in Greenfield, Ind., and an advanced research-and-development technology center in Escanaba, Mich.

Pushing the Envelope
While changes have made the difference at EMP, there are some basic tenets that remain the same. EMP remains focused on manufacturing and offering defect-free products and services, while advancing its technological expertise. It maintains continuous-improvement strategies in all operations and guarantees 100 percent on-time delivery.

EMP’s core business remains cooling pumps, and the company currently is expanding its product offerings for the diesel industry to include lube-oil pumps, fuel-system components and highly integrated engine front covers including pumps, gears and accessory drives. Paul Harvey, director of business development, notes that “EMP has also recently expanded its product line by offering high-flow water pumps for use in the performance racing industry, through a new division known as Stewart Components.” Additional information on Stewart Components can be located at www.waterpumps.com.

From the Lab
To manufacture a better pump, EMP has expanded its technical resources and capabilities to meet the emerging demands of its customers. In August 1999, EMP opened the Escanaba research-and-development facility to provide a focused and creative environment away from the day-to-day manufacturing operations. Measuring 30,000 square feet with 34 offices and large development laboratories, the technology center includes a water-pump development and test lab, a lube-systems development and test lab, a reliability test area, space for tool-making and advanced rapid prototyping, and laser sinter-station operations.

EMP is aggressively growing its technical expertise by tapping external resources as well as building from within. The company has also sponsored research relationships and key human-resources recruiting pipelines with academia in order to effectively develop and implement innovative technologies.

Developing rapid prototypes has been another key opening the door for growth at EMP. “We can take something from specs to testing a rapid prototype in only two weeks,” Allen says. “We’ve written our own proprietary software for this; no one else has come close to matching the speed and quality. Our primary advantage is speed. Usually when clients come to us, they’re under the gun; they’re looking for a realistic solution. We’re very cost-competitive but the bottom line is not just cost; it’s how fast and how well we can develop new product solutions.”

The rapid prototyping came about, as all things have at EMP, with the idea that something could be done better and faster. Traditionally, the material used with EMP’s old rapid-prototyping system had some limitations. EMP still had to create prototype volutes via casting to get the strength and sturdiness required. “We saw that we really needed a rapid-prototyping solution that could produce a testable volute prototype as well,” says Allen. “That’s where the real challenge was.”

How well are EMP’s continuous advancements appreciated in the markets it serves? The true test comes in recognition from its peers. EMP’s patented advanced electric fluid pump was cited as among the Top 25 New Products for 2001 in Car Craft Magazine (January 2000 issue) and was the grand prize winner for “Excellence in Design” in the annual competition sponsored by Design News (February 26, 2001, issue). The electric pump was also featured in prestigious international publications including Diesel Progress (June 2000 issue) and World Pumps Journal (May 2000 issue).

But this never means that EMP will rest on its laurels. Ever restless, the company will continue to listen to customers, according to Larche, “to develop the fastest solutions that get the best possible results at the lowest cost, for our customers”. More information on EMP is available on its Web site, www.emp-corp.com.