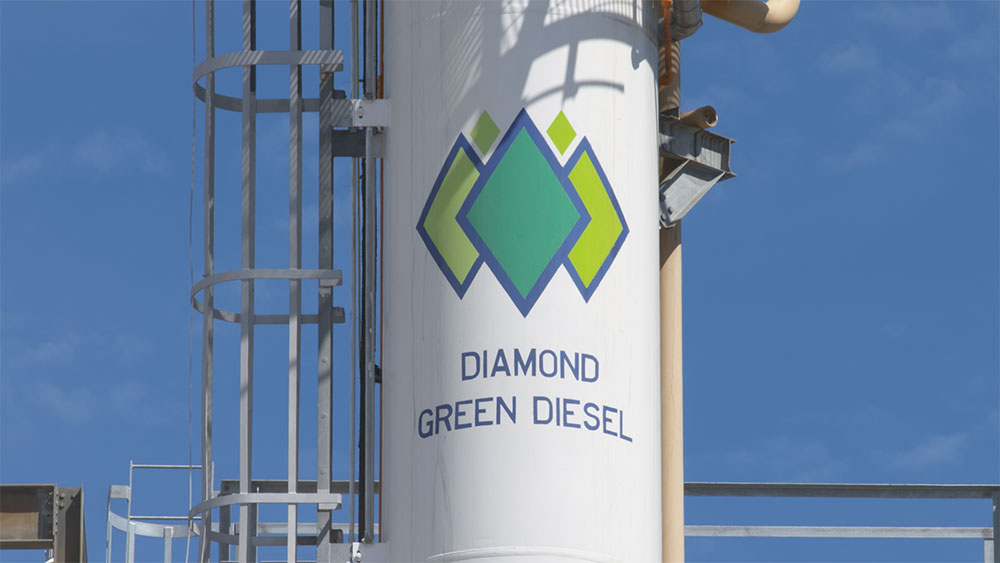 Sustainable energy production continues to grow, as price performance improves with larger scalability and technological advancement. Just one recent example is the addition of a second plant to the Diamond Green Diesel bio-fuel facility in Norco, La. The expansion, due to complete in 2021, will increase production capacity by 400 million gallons, over its current 275 million gallons produced annually.”Diamond Green Diesel (DGD) is a joint venture between Darling Ingredients, producer of sustainable products from bio-nutrients and the first producer of biodiesel made from animal fats both in Canada and the U.S., and Diamond Alternative Energy LLC, a subsidiary of petrochemical manufacturer Valero Energy Corporation.

The $1.1 billion investment in the new plant and improved logistic capabilities is expected to be funded by revenues generated by DGD. The capital cost also includes building a renewable naphtha finishing facility. This facility is expected to produce some 50 to 60 million gallons of renewable naphtha, which adds incremental low carbon credit opportunities for DGD operations.

DGD produced its first barrel of renewable diesel in 2013; it directly employs 50 people plus additional contractors. It has expanded twice since then and is debt free, producing renewable diesel that uses approximately 2.4 billion pounds of waste fats and oils, or approximately 15 percent of the waste fats and oils generated in North America. This latest third expansion comes on the heels of a 115 million gallon yearly capacity increase from 160 million gallons completed in the third quarter of 2018.

“The demand for biofuels from the ever-growing low carbon fuel markets around the world is driving the decision to expand DGD’s production of renewable diesel made from waste fats and oils,” says Randall Stuewe, Darling Ingredient Inc.’s Chairman and CEO. Indeed, Darling Ingredients is also involved in similar ventures to repurpose manure and organic food waste into renewable electricity and gas for local energy markets in the Netherlands, Belgium and parts of Germany. “Darling Ingredients looks to the future growth of biofuels and is transforming the base business to supply it with sustainable feedstocks,” Stuewe notes.

The partnership with Valero combines the strengths of both companies, the expertise of Darling Ingredients in making sustainable products and Valero’s competencies in petrochemical manufacture and transport. “Valero has been a great partner,” Stuewe says. DGD is able to utilize Valero’s vast knowledge of refinery operations while accessing Darling’s unique understanding of waste fats and oils feedstock supply and refining. This combination of skills linked with a collaborative working environment is the foundation of DGD.”

He adds, “DGD independently markets its products utilizing Valero’s vast experience and knowledge of the petroleum fuels market. Situating DGD next to Valero’s St. Charles refinery has been the perfect location for both sourcing feedstock and marketing our finished products to premium markets in the U.S. and around the world.”

Renewable diesel produced from rendered animal fats, used cooking oil and inedible corn oil is fully compatible with existing diesel engines and the distribution infrastructure. It has a substantially lower carbon intensity than soybean- based biodiesel, not to mention diesel made from fossil fuels.

As Stuewe points out, “Traditional petroleum diesel and renewable diesel are both hydrocarbon fuels, chemically indistinguishable from one another. Their only difference is their source of feedstock—fossil fuels versus sustainable waste fats and oils. Renewable diesel burns much cleaner, reducing greenhouse gas emissions by over 85 percent (similar to many cellulosic products) as well as substantially reducing particulate emissions.”

Renewable diesel can be used in all modern diesel engines, and because of its high cetane number, there is no loss in engine performance. It could theoretically be used at 100 percent instead of mixed with fossil fuel-based diesel. It also has excellent cold weather performance, allowing a fleet to use it year-round, even in very cold climates. Finally, because it is chemically the same as petro diesel, it’s compatible with the diesel distribution infrastructure and does not require specialized storage tanks— renewable diesel can even be dropped in and shipped via existing diesel pipelines.”

Needless to say, Stuewe is highly optimistic about the growth potential for renewable diesel, as well as renewables in general. “Biomassdiesel usage is projected to increase due to further implementation of greenhouse gas-reducing programs. For example, the California Low Carbon Fuel Standard has increased mandates to a 20 percent reduction by 2030 with an aggressive ramp up each year. The European Renewable Energy Directive II (RED II) is in the process of revising its current RED I directive to increase requirements for Renewable Energy (transportation, electricity and heating) from 6.8 percent in 2021 to 32 percent in 2030. Other countries, such as Canada and Sweden, are imposing dramatic goals to reduce greenhouse gas emissions for the future.”

DGD is not the only maker of renewable diesel. Renewable Energy Group is a notable producer of renewable diesel in the U.S. and Neste leads production for markets in Europe and Singapore. DGD’s competitive advantage, Stuewe points out, is that, “Darling Ingredients is the only company with both a supply of feedstock and vertical integration into renewable diesel.” This provides not only cost-efficiencies, but greater quality control.

The demand for biofuels from the ever-growing low carbon fuel markets around the world is driving the decision to expand DGD’s production of renewable diesel made from waste fats and oils. “As a reflection of our recent announcement to expand DGD in 2021,” Stuewe says, “Darling Ingredients looks to the future growth of biofuels and is transforming the base business to supply it with sustainable feedstocks.”