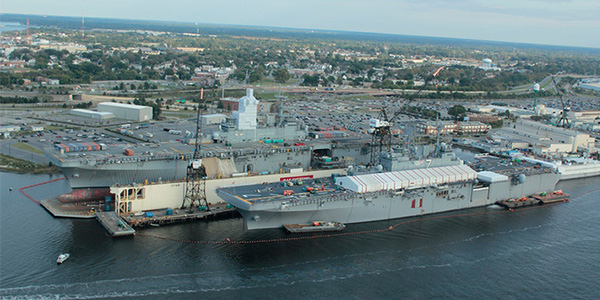 Founded in 1915, Norshipco (Norfolk Shipbuilding & Drydock Corporation) began business in the Norfolk area repairing tugboats and wooden hull schooners. When the United States entered World War I the company started repairing Navy vessels. Ever since the war, the U.S. Government and, more specifically the U.S. Navy, has been one of the company’s primary customers. Norshipco has not only served the nation through Word War I, but also World War II, Korea, and many other conflicts. Over the years, Norshipco has successfully evolved into the largest and most capable private-sector ship-repair company on the East Coast.

Today, there are certain events that have led to growing expectations within the company that U.S. Navy spending will continue to increase in the next several years. In recent years, the Navy’s spending for ship repairs and new shipbuilding has been modest. Moreover, the armed services’ anti-terrorism campaign has increased the workload of America’s naval fleet. Taken together, both of these events have led to significant wear and tear on U.S. ships. As a result, the Navy is likely to invest more funds to maintain its aging fleet. U.S. Defense Secretary Donald H. Rumsfeld also has discussed a desire to funnel more Navy repair jobs to private shipyards. Since its Virginia yard serves the homeport of many Navy ships, Norshipco is poised to benefit even more from increased defense spending.

In addition to its work for the U.S. Navy, Norshipco is a leader in the refurbishing and conversion of all types of commercial vessels including ferries, tankers, LNG carriers, cargo liners, container ships and cruise vessels, plus all crafts connected with the exploration, production and transportation in the oil industry, from service and crew boats to drilling platforms, pipe barges and heavy lift ships.

Because of its diversified trades people and equipment, Norshipco also offers a wide range of industrial services to non-naval sectors. Norshipco is capable of manning very large projects with minimal or no subcontracting. The company’s diversity allows it to support fieldwork with full fabrication and machining expertise. Norshipco has a tremendous amount of experience in steel, aluminum and alloy fabrication, mechanical repair, boilers, heat exchangers, and piping installations. Norshipco offers a large and experienced work force for field projects, in supplying parts, machining, and fabrication work.

USMR evolved from The Carlyle Group’s purchase of a San Diego shipyard, Southwest Marine, in 1997. A year later, Southwest bought and absorbed Norshipco, which had been privately owned. Afterward, Southwest’s name was changed to U.S. Marine and its headquarters shifted to Norfolk.

USMR filed with the Securities and Exchange Commission in March 2002 for an initial public offering. The offering was intended to raise cash for repayment of debt and allow existing USMR shareholders to sell some of their shares. The company had expected to complete the stock offering in June 2002. In May 2002, however, the company opted out of the IPO and instead agreed to a buyout. United Defense Industries Inc. has decided to acquire USMR for $316 million. According to United Defense, the company will be a distinct business unit. United Defense makes artillery, shipboard guns and missile launchers. The transaction is expected to close by the end of June 2002.

Recently, USMR has reported stellar financials. USMR – which credits about 91 percent of its business to defense-related work – more than doubled its net income between the first quarters of 2001 and 2002. The company earned $4.1 million in the first three months of this year, compared with $1.9 million a year ago. Revenues grew 53 percent to $117.8 million in the first quarter of 2002 from $76.8 million in the same period last year. The great news on the net income and revenue front is set to continue because of the Navy’s need for additional overhaul and repair work.