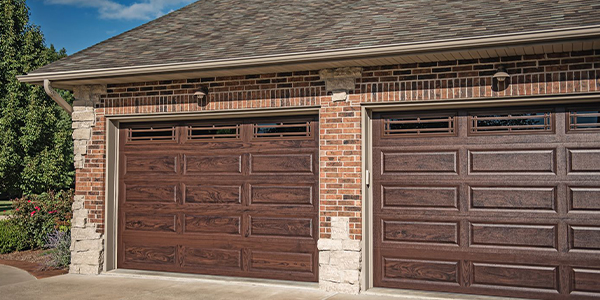 In addition to ipods and $100 basketball sneakers, one major sign of personal prosperity is the garage door. Specifically, steel garage doors that may number as many as three, sometimes four, to accommodate various vehicles, and available in a variety of styles and colors, all operable by remote control.

Think about it: 100 years ago, most people didn’t have garages because they didn’t have anything to garage. Only the very wealthy could afford an automobile. For that matter, only the very wealthy could afford a house, let alone a garage, attached or otherwise. Following World War II and the subsequent growth of affordable housing, garage doors were made out of wood, and were usually single doors that you’d manually lift with a pull at the bottom of the door. You’d actually have to get out of the car, even if it was raining or snowing, to pull the door up or down.

These are the kinds of stories that make your kids roll their eyes, just like the six feet of snow you had to trudge through for six miles to get to school back when you were their age. Still, this is just another example of a kind of technology – maybe not a computer chip kind of technology, but a technology nonetheless – that we’ve all taken for granted not as a convenience, but a modern necessity. In fact, the garage door is usually the biggest door on the house, the one that stands out the most. So design, as well as durability, is very important.

C.H.I. Overhead Doors (www.chiohd.com) got into the business right about the time the industry was transitioning from traditional wood construction to steel, which proved fortuitous to gaining a significant competitive edge.

The company known as Coach House Garages was originally founded in the 1970s to build prefabricated garages. The business was regionally based out of Arthur, Ill. (not far from Champaign-Urbana) and, in addition to the nearby Chicago area, served a geographic swatch running from Indianapolis, Ind. to St. Louis, Mo. The walls and trusses were shipped as a kit to the construction location, and a crew of about three workers could build a garage in a day.

Of course, an essential part of the package was the garage door. Although the company initially bought the garage doors, it decided it could just as easily, and profitably, make the doors. Then it decided that it could also make the door for other garages, not just the ones it was building. As it turned out, the garage door business grew faster than the garage building business. And, there was the opportunity to sell the product across the entire United States, which couldn’t be done with prefab building.

In 1981, the two lines of business went their separate ways as two different privately owned companies under different ownership, but with similar names. Coach House Garages is still a prefab builder, while C.H.I. (Coach House Incorporated) became strictly a garage door manufacturer and supplier that today employs 360 people and operates a state-of-the-art, 600,000-square-foot manufacturing facility. It is one of 15 major players in the domestic garage door industry.

Steeling for Business
Here’s where the fortuitous timing of getting into this industry played an important role in C.H.I’s success. Prior to the mid-80s, garage doors were primarily made out of wood. But the trend – which is today the standard – began towards more longer-lasting steel. While other manufacturers had to invest in retooling, C.H.I. was just starting out in acquiring the manufacturing equipment base to make the new kinds of doors. For an overhead door company, it meant less overhead as it didn’t have to lose time and money in reconfiguring manufacturing operations.

Today, says Tim Miller, sales and marketing manager, the labor-intensive manufacturing process has evolved to make the most efficient use of materials and workflow. “Everything that goes into making a door requires a lot of handling,” Miller explains. “And we really have a very efficient workforce. We have the production process streamlined to the point where the roll forming and paneling starts at the west end of the plant and then meets in the middle where the hardware, struts, tracks and springs are held in a staging area where it’s ready to be shipped. Our production layout is very efficient.”

He adds that most of the major manufacturing equipment in use today was acquired since 1993 when the industry had fully transitioned to steel doors. “We have the latest technology and we didn’t have to redesign or transfer anything because we were starting out more or less from scratch.”

Today, the typical garage door lasts between 14 to 17 years, depending upon use and quality of the door. It’s also primarily maintenance-free as there is no deterioration as there is with wood. About 60 percent of C.H.I.’s business is for new construction, with the rest retrofit. C.H.I. is unique in that it sells not only to residential and commercial markets, but since 2001 also makes rolling steel doors used in industrial settings. While it makes both the door and what’s needed to make the door operable, it does not manufacture mechanical door openers. C.H.I. sells to distributors who, in most cases, are also garage door installers, who in turn sell the door openers as a separate product line.

Handling New Options
Miller notes that consumers have a great deal more options in doors than they once had. “Today, it’s not just a two-door garage, but a three-door. And the trend is to have one double-wide door to accommodate two cars through a single opening, with another smaller single-wide door. There’s also a variety of styles and finishes. Most doors are offered in colors, so you don’t have to paint it or settle for white. Also, we offer different exteriors, including stamped steel, urethane, plywood and hardwood and raised or flush panels. Interestingly, one new style tries to look like the old wooden carriage house doors, but of course with the durability of stronger materials.”

To a large extent the fortunes of C.H.I. are tied to the larger economics of the construction industry. “Everybody has been talking about how the building bubble is going to break soon, we just aren’t seeing that on the horizon” Miller says. He also notes that C.H.I.’s doors have been installed in Mexico, Portugal, Puerto Rico, and Europe and Canada, but adds, “The overseas market is a small outlet for us and nothing we’re aggressively pursing.”

Perhaps the biggest endorsement C.H.I. has received is from famed racecar driver Richard Petty. “One of our distributors made a sale to Petty Enterprises, and Richard was so happy with the doors that one thing led to another so that we’re now proud to be called the official door of Petty Enterprises.”

And this is further proof that C.H.I.’s success has been an open and shut case.