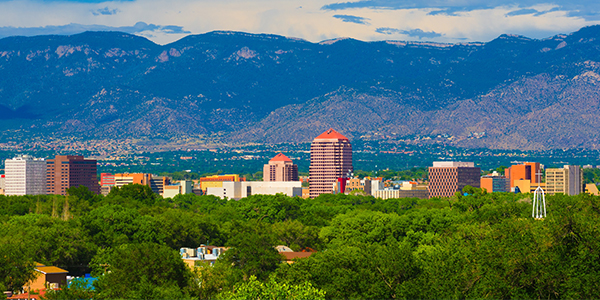 For Chihuahua and Albuquerque the trail toward economic development was created more than 400 years ago, and while vital transportation routes have become more numerous, sustenance in the way of business growth is nonetheless important.It is because of this that the city of Chihuahua and Albuquerque have entered into a bilateral agreement to shore up the economic bases in both regions in the hopes of forming a unified core that can better compete with rivals in Asia. It represents one more reason why companies should consider a move into Albuquerque worthwhile.

For Albuquerque the agreement signi-fies another step in the area’s drive toward a more diversified economy. “In the 1950s through the 1970s we were a one com-pany town, dependent on the federal government through Sandia National Labs and Kirtland Air Force Base,” which currently is the third largest installation in Air Force Materiel Command, covering 51,558 acres and employing over 23,000 people, explains Albuquerque’s Director of Office of Economic Development Fred Mondragon. But a milestone occurred with Intel’s arrival 15 years ago, which currently employs 6,000 people. “That fueled a lot of interest in Albuquerque and in the last five years we’ve seen substantial diversification,” he says.

In particular, the aircraft industry is budding with companies like corporate jet builder Eclipse Aviation, which went through an extensive site selection process before setting its sights on Albuquerque. Factors that went into the decision included climate, the ability to draw a skilled labor force, as well as sufficient airport space. “Albuquerque represented the best opportunity,” said Perry Denker, Eclipse vice president of investor relations.

Other companies that call Albuquerque home include Intel, GE, and General Mills.

But with all of these changes Albuquerque, Mondragon notes, still has no real identity of its own. “People always think it’s in Mexico,” Mondragon says. “We’re now in the process of creating a brand by incorporating the old and the new.”

The “old” encompasses a history spanning 300 years; the city is currently planning spectacular events to mark this event that include a year-long tribute that will draw from the synergy of Albuquerque’s vast demographic base: Mexican, Spanish and Anglo. Most notable is its relationship with Chihuahua, involving The Camino Real de Tierra Adentro (The Royal Road of the Interior) a 1,550-mile road that linked Mexico City to San Juan Pueblo, north of Santa Fe. For over four hundred years, it provided a vital transportation corridor for the Spanish Colonial exploration and settlement of what is now New Mexico. It has since become symbolic of the extended ties between these two regions. “There is a four-century history between Chihuahua and Albuquerque,” Mondragon stresses. “The relationship started in the 1500-1600s and for a long time there has been a lot of interaction. Forty years ago we established a sister city relationship. There are a lot of similarities between us.”

Among those similarities is each city’s desire to spark economic development.

To further enhance this foundation, the “sisters” formed a bilateral commission divided into five groups: friendship and culture, tourism and sports, technology and science and business to business (trade and services). “Every time we go to Chihuahua we take business people,” Mondragon says, and vice versa.

The initiative mirrors a similar venture
on the state level among New Mexico Governor Bill Richardson and Chihuahua Governor Jose Reyes Baeza, who both have signed agreements putting into motion significant trade and tourism initiatives. Their MOU (memorandum of understanding) pledges to continue to cooperate on a unique initiative, known as the Maquila Supplier Program, to expand business relationships between Chihuahua-based maquiladora or “twin plant” factories, and New Mexico businesses, by working with maquiladora managers to recruit their suppliers to the New Mexico-Chihuahua areas. Bringing those suppliers to the region reduces costs for the maquiladoras and improves their manufacturing flexibility. This program also gives maquilas access to New Mexico’s technology and education institutions for licensing, technology transfer and training opportunities.

”This bi-national agreement is the nexus of advanced manufacturing and research in our regions and will create a great economic force to compete with Asia,” he says.

A spectrum of opportunity
Other companies wanting to take advantage of this bonanza in trade and commerce should consider this region for several reasons; the most substantial is that business costs are the lowest in the country, 27 percent below the national average. The area’s crime rate has fallen faster than the U.S. average, but it still ranks in the bottom quintile and keeps Albuquerque from being ranked on top.

It is the job of the Albuquerque Economic Development (AED) to actively recruit
companies that will export goods or services from New Mexico. These jobs contribute to the area’s economic growth, development and diversification, improve the standard of living and opportunities within the Albuquerque area. The AED offers site-selection assistance, labor market analysis, business incentive analysis, workforce recruitment and job-training assistance and coordination of state and local assistance.

Since its creation in 1960, AED has recruited over 200 companies and more than 25,000 jobs to the Albuquerque metro area. Further, AED was ranked as one of the 10 best economic development groups in the U.S. by Site Selection magazine in 2000.

Helping Albuquerque to achieve star status among business centers is its central downtown district, a well-maintained historical area, an international airport, and the great majority of the industrial, commercial, and residential development. In addition, Albuquerque’s transportation infrastructure contributes to its role as the economic hub of New Mexico. Albuquerque is located at the intersection of Interstate 25 and Interstate 40. Albuquerque’s International Sunport, with over 25 direct flights and 160 daily departures, also contributes to the area’s economy by bringing business and tourist travelers from around the world.

With all of this activity it’s no wonder so many companies have established operations in Albuquerque. Combined with its sister city in Mexico, the area is on the right path toward economic expansion.