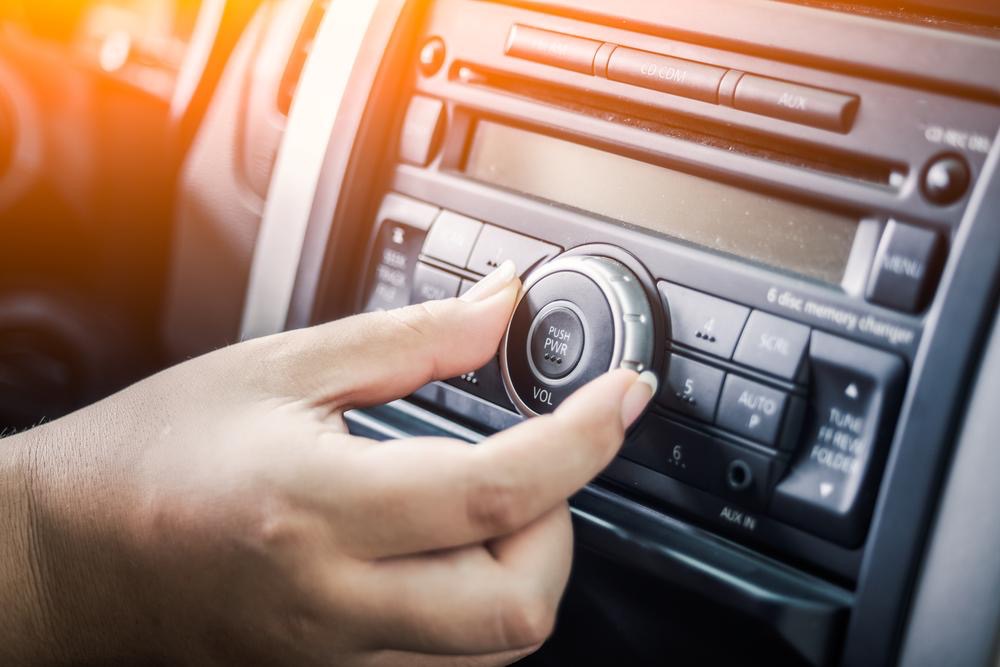 Car audio systems have come a long way since listening to your favorite radio tunes in the days of Leave it to Beaver. While car audio systems evolve every decade or so, the idea remains similar throughout its history.

The system is composed of a tuning or adjusting device attached to the dashboard and a speaker system meant to deliver sound. Aside from this basic principle, the way we listen to music in an automobile looks nothing like it did when car-audio was first introduced, or even what they looked like 10 years ago for that matter.

From MP3 players and CDs to the prehistoric audio cassettes tapes that were once predominant; as models change, the way we listen to music in our cars is adjusted accordingly to a car’s audio system. With the advancement in digital technology through the ubiquitous iPod, the way we would listen to music in our cars would essentially be taken out of the dashboard and into your pocket, and eventually your phone. So, where did this all begin?

The Beginning: Car Audio Systems from the 1930s

In 1930, early car radios were first introduced by two entrepreneurial brothers, Paul and Joseph Galvin. The Galvin’s named their first radio the Motorola, a combination of the words “automotive” and “Victrola” (the early name for machines that played records). Eventually, the Galvins’ early company, evolved into the telecommunications giant Motorola Inc.

The Galvin car radio cost $130, equivalent to roughly $1,500 nowadays. The system used vacuum tubes powered by a single battery and depending on your location; you could listen to the hits of the day on a hissy AM radio. The AM radio remained the standard in America until the early 1950s.

In 1952, a German company, Blaupunkt, released the first ever FM radio that was also car-ready. A year later, Becker’s Mexico would introduce an AM/FM radio which would become the vehicle standard for many years to come. 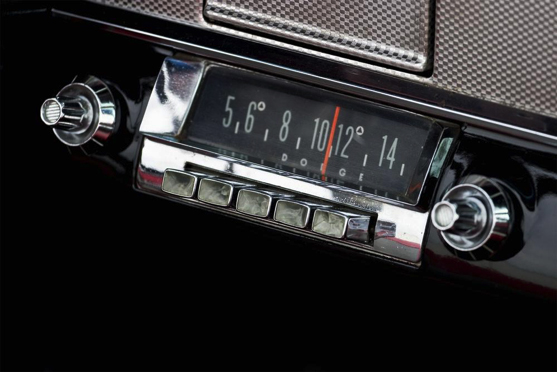 The 1950s saw a growing versatility in the way music was being heard in the automobile. With this came a lot of experimentation and some noteworthy attempts at blasting tunes in a moving vehicle.

In 1956, Chrysler introduced the first (and only) in-car phonograph, named the Highway Hi-Fi. The phonograph was equipped with a miniature turntable mounted on the bottom dash on the passenger’s side, directly connected to the car’s electronic system.

Chrysler-made 7-inch records, all under a special contract from Columbia Records that could be played by flipping a switch which enabled the turntable to slide out from under the dash. Although interesting, Chrysler’s Highway Hi-Fi did not work very well since the record skipped every time there was even the slightest bump on the road.

After Chrysler’s failure, no further attempts at changing the way people listened to music in cars occurred until the early 1960s. The breakthrough, which would establish the standard in audio-car systems for the next 25 years, came when engineer and entrepreneur, Earl “Madman” Muntz, pioneered a new system based on 4-track technology used in audio recordings.

Originally called the Stereo-Pak, Earl was quick to realize the potential for 4-track cartridge technology for car stereos since the track would not skip.

He developed the Autostereo, brilliantly advertised through a marketing campaign that fit into the swing of the early 60s. For the first time in history, drivers had the freedom to select their own listening experience.

Improvements and expansions on Muntz’ original idea were quickly developed, including the 8-track cartridge system (developed by the one of the inventors who had worked on the original Motorola nearly three decades earlier).

By 1964, Phillips launched the first ever compact cassette, even though it would not gain in popularity until much later, as the more cumbersome 8-track would become the standard for nearly a decade due to its simplicity and low cost.

Slowly but surely, the smaller cassette tapes quality improved, eventually replacing the larger 8-track. With the advent of the Walkman, developed by Sony in 1979, Cassette tapes became the standard, as an individually-created playlist could be made for the first time. 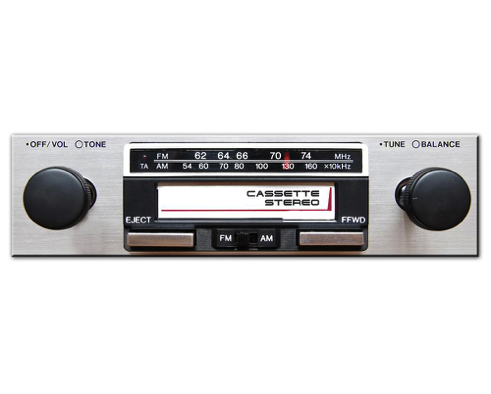 By the late 1970s, the need to pump up the volume also took hold, and people began to wonder why in-car stereo systems were limited to single-speaker, monophonic systems. Also, car manufacturers began promoting the option of customization of the vehicle before purchase.

For the first time, audio systems as a full spectrum listening experience came into focus. But the development of in-car systems happened slowly.

This led the way to breakthroughs in the quality of sound systems which came closer to the output capabilities of at-home speaker systems. Pioneer would first introduce their Supertuner, equipped with advanced circuitry, reception and tuning capabilities in 1976. This advancement came at the same time highly customizable aftermarket systems began to appear.

By the early 80s, just as everyone got comfortable with their audio set-ups, Philips and Sony began developing the prototype for the 90s-ubiquitous compact disc or CD, marketed commercially for home use starting in 1982.

Pioneer developed the first ever car CD-player in 1984: the CDX-1. The CDX-1 sharply improved sound quality compared to anything else on the market. The CDX-1 instantly became a huge hit due to its crystal-clear sound and ability to track-skip.

The public liked the fact that the sound quality of CDs, unlike in cassette recordings, did not wear out over time.

By the mid-90s, multi-disc CD changers gave listeners the ability to switch between 10 CDs at a time. A cultural phenomenon to achieve ultimate sonic experiences took hold with elaborate, customizable sound systems.

By the year 2000, MP3 Players, with their ability to store thousands of hours of songs on one single portable device, revolutionized the way people thought about listening to music.

By the mid-2000s, in-car audio systems developed the capability to connect MP3s to the existing vehicle sound systems.

Using USBs, Bluetooth or an aux cord, the way we would select what to listen to would never be the same. Add to this Satellite radio and streaming services like Spotify and Pandora, companies offered increasingly varied methods of getting the music we want when we wanted it. 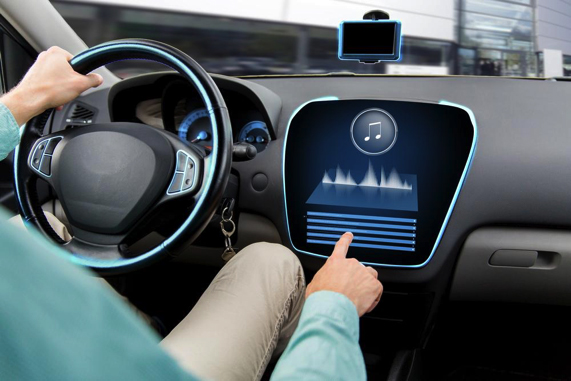 Aftermarket customization is still crucial in developing a system that stands out from the norm; anyone can have the system that they desire. The process of making an aftermarket car-audio system is part of an intricate and complex method of assembling various parts to suit your listening desires.

The advent of the use of hotmelt adhesives helped support the public’s appetite for customized systems.

Although there are number of applications for hot melt adhesives in car manufacturing, adhesive and sealant applications tend to be used to install parts for audio and radio, including additional components, as well as to attach plastic trim and wiring.

On average, vehicles use a total of 15kg of high-quality adhesives to assemble vehicles today!

Typically either performed by human hands or by that of an assembly line, the installation of the vehicle’s audio system begins with the sanding of the marked outline of the main console, speakers, subwoofers and the rest.

After this is done, administering hot melt adhesive along the outlines ensures a close, tight fit. Assemblers always make sure the plate/speakers are exactly over their designated place and held for a specified, elongated period. Parts are held fast to the door lining until the adhesive hardens.

It’s also common for car assembly manufacturers to use screwed joints to assemble audio systems. Lining up the parts to their designated place, screwing the joints and administering hot melt adhesive to the plate’s edges ensures all pieces of the audio system are properly installed and ready for the next step of the assembly process.

Car audio systems have come a long way since the Galvin brothers in 1930. Who knows what future innovations may become the cassette player of the future.

Aligning the SOC to Secure IT, OT and IIoT