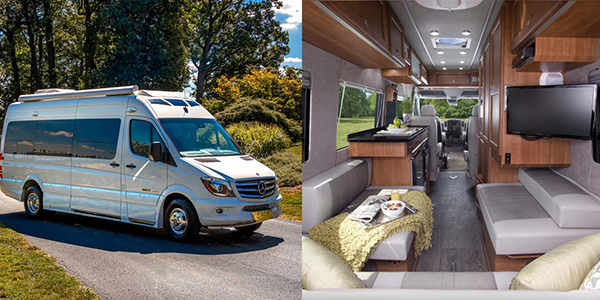 Even Jac Hanemaayer couldn’t have predicted it would have turned out this way. In 1974, when the Dutch immigrant and entrepreneur designed his very first Roadtrek camper van, his main motivation was that he was looking for a vehicle with the comforts of an RV, but with the easy drivability of a van.

He almost certainly didn’t realize that he was starting what would become the manufacture of the best selling “Class B” motorhome in North America, or that the company in his adopted hometown of Kitchener, Ont., would become a major employer with a 120,000-square-foot factory.

“We were the literal vision of our owner and founder, Jac Hanemaayer,” said Andrew Knowles, the director of sales and marketing for Home and Park Motorhomes, the company that makes and markets Roadtrek.

Significant growth
Today, the company he created, Roadtrek, envisions double-digit sales growth over the next several years, fueled by both the growing number of baby boomers now entering their retirement years and looking to hit the open road, and the rise in domestic travel inspired by the desire to stay within the security of North America.

“The RV industry has had a significant growth phase,” said Knowles, who said that record sales have been routinely posted since the arrival of the new century. He said the prime age for Roadtrek customers is early 60s – a population that is beginning to surge with the aging of the post-war generation.

Hanemaayer moved to the Kitchener area in 1953. He has become involved in many businesses including home construction, residential and commercial land development, packaging equipment importation and distribution, kaolin mining and processing, and advanced technology to separate liquids and solids.

With his business success, Hanemaayer became interested in a recreational vehicle, or RV, for his personal use. While he is said to have liked the spacious room and comfort offered by the larger class ‘A’ and ‘C’ motorhomes, he also told friends he didn’t want to become a “weekend bus driver.”

That’s when he decided to take matters into his own hands. Hanemaayer sat down and came up with his own design for a vehicle that had the size and convenience of a van – which were booming in popularity in the mid 1970s – but had some of the best features of a much larger vehicle. He found a fledgling company called Home & Park Vehicles to build it, and he was so satisfied with the outcome that he bought the company.

In 1980, Hanemaayer put his new experiences with motorhomes to work by completely re-designing the product with its now famous low profile roof, lowered floor and innovative three section floor plan, The company started to market it as “Roadtrek, The Motorhome that Drives like a Van.” To protect the design, Canadian and U.S. patents were secured on many of the innovative features.

As the company celebrates its 30th anniversary, Hanemaayer still participates in the development and refinement of the vehicle he invented. His son, Jeff, started as a summer student employee and learned the business from the ground up. It was Jeff Hanemaayer who oversaw the company’s growth from 1985 to 2000 as president. Today, the founder’s son is the chairman of the company.

No. 1 in sales
Over time, the Roadtrek became popular enough that North American aficionados – known, naturally, as “Roadtrek-ers” – started to link up with one another. With the company’s assistance, the Roadtrek International Owner’s Club was launched in January 1993. By 2004 the club had over 2,000 vehicle members and had become the fifth largest product chapter within the FMCA.

With Roadtrek’s continuing number one sales rank, the firm outgrew its 50,000-square-foot plant. In 1993, the company moved into a modern 120,000-square-foot manufacturing facility to increase production capacity and lower manufacturing costs. Employment has grown from a handful as recently as 1980 to 200 full-time employees. Home & Park has more than 100 dealers from coast to coast. In 2001, Home & Park was the first RV manufacturer in North America to obtain registration to the rigorous international standard ISO9001:2000(E).

Knowles said the company uses Chevrolet express van chassis. “They come in here pretty much stripped down and modified to our own specifications, but what we do is what defines Roadtrek,” he said. “They come in the back door, and we remove most of the floor and replace it with a fiberglass floor, a lower floor, and then we raise the roof inside the van so there’s a six-foot two-inch standing area, and we also cut away where the appliance panels and the windows fit into the sides.”

The company has high hopes for its Roadtrek 210-Popular model, which was unveiled last December at the National RV Trade Show in Louisville. The new Roadtrek 210 is a true wide body class B motorhome that starts with a full van body, not just the cab. By doing so, Roadtrek gets a long (155-inch) wheelbase for better ride and handling without having to take dual rear wheels. The frame is extended 18 inches behind the rear wheels, resulting in an overall length of 21 feet 11 inches.

Knowles is excited by the continuing growth projections. “There is a tremendous number of people looking for something easy to drive, but don’t want something that’s intimidating or not easy to park.” He noted that because of the way that the Roadtrek is designed, it’s the only type of RV that’s allowed into many gated communities.

As Roadtrek celebrates its 30th anniversary, the company has now grown up with its customers.

“Today’s 60-year-olds are different from the 60-year-olds of 20 years ago, especially when it comes to vehicles,” Knowles said. “They have enjoyed a good lifestyle and worked hard, and now they want to enjoy the fruits of their labor and add to that lifestyle. We think the Roadtrek fits in well.”

To find out why Roadtrek is the #1 selling North American class B motorhome (camper van), visit www.roadtrek.com/USI or call toll free 1-888-ROADTREK (762-3873).