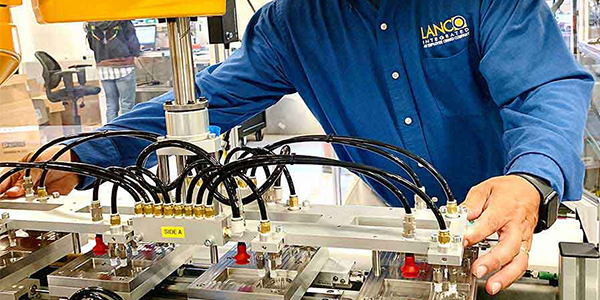 There’s no question that automated robotic assembly has enabled manufacturers to double their production output while allowing for more precision and efficiencies. Achieving top-of-the-line performance in this industry is Lanco Assembly Systems, a leading manufacturer of components for production automation and a builder of flexible turnkey assembly machines.

Lanco has extensive experience in the construction of special-purpose equipment as well as in the integration of industrial robots and other commercially available automation products. Just 25 years old, the company originally was based in Switzerland, and now calls Westbrook, Me., its home. This headquarters site is complemented by sales/service offices in Charlotte, N.C., and Toledo, Ohio. Lanco engineering teams from North America and Europe combine to service international customers worldwide.

A customer-driven company, the company has advanced its operation recently by responding to market demands for more automation in highly specialized areas, reports Tim Neale, vice president of sales. This has had specific impact in the area of vision-guided robotics in the medical arena.

Its newest advance is a needle and suture assembly for medical use, in which each motion is verified and detected for optimum efficiency.

“Assembly equipment hasn’t changed too much over the last five to six years – what has changed is the ability to integrate different things into the system, such as robotics. These systems help the manufacturing industry achieve better efficiencies,” Neale says.

Robots do the work
Lanco is well known in the industry as the main importer of TOSHIBA Scara Robots serving Germany, Austria and Switzerland. Toshiba robots of the SP-HSP series provide a radius of action of more than one meter. Because of the price level of Scara robots, new possibilities open up in flexible production automation. Lanco, as a specialist in assembly automation, offers standardized assembly cells with integrated Scara robots. These cells are very flexible and are therefore reusable in the future. The robot series TOSHIBA SR-HSP is a family of six sizes and has a maximum radius of action between 420 mm and 1050 mm. By default, all Scara robots are equipped with four axes. The robots are delivered with the control unit TOSHIBA SR-7000, which has multitask functionality as well as an integrated SPS with 32 inputs and 24 outputs. When delivered, the robot is completely ready for operation. Optionally, there is a fifth axis, a Z-axis with a 400 mm stroke, and there is a version for clean-room operation. The control unit TOSHIBA TS2000 has multi-tasking capability as well as an integrated SPS with 38 inputs (24 VDC) and 32 outputs (transistors) for direct, time-optimized control peripheral hardware. Additionally, two serial ports are provided for external data exchange.

The control has a built-in control panel and is ready for operation. The manual programming device, Teach Pendant TP1000, allows interactive on-site programming of the robot. Optionally, programs can be created on a PC. In other activities, the company joined with Laserquipment in a new innovative technology for high economic polymer welding of 3D polymer housings in the automatic assembly production line. The patented hybrid welding process combines the cost-effectiveness of conventional light welding systems with the efficiency of laser welding technology. The dual method of irradiating the weld seam that underlies this technology provides new possibilities in the process design and contributes particularly to a higher process stability. The obtained, evenly distributed temperature field in the welding plane leads to shorter process cycle times with less required laser power compared to conventional laser contour welding.

Pallet transfer expertise
Another technology that has received recognition is the pre-engineered HFL 2002 modular pallet transfer system that provides companies with a flexible platform for manufacturing and assembly. This highly flexible automation platform incorporates a modular design using high-quality aluminum profile construction. Thanks to steady development and continuous improvement, the system is now in its third generation, the “HFL2002-S.M.A.R.T.” or “Smart System.” In recent years, Neale says, Lanco has sold more than 60 miles of this transport worldwide as components or as part of turnkey equipment.

The HFL 2002-S Transfer System is a non-synchronous pallet transfer system suitable for lean workstations or for building semi or fully automatic systems. It can be easily re-configured to match a customer’s changing needs and requirements. The ease of re-configuring the system allows the customer to minimize initial capital investments and to amortize the investment value over the life of the product by adding the required automation as the needs arise and re-utilizing previous investment into new business ventures.

Linear tracks and corner modules are the basic building blocks of the HFL 2002-S Transfer System. Linear tracks are mounted either on floor or table stands and transport pallets in a single direction through the various workstations. Each section is equipped with two belts that run freely over rollers to move the pallets. A single drive mechanism mounted below the track can be positioned anywhere along its length. Each drive mechanism has an automatic belt tensioner and is designed to allow belt replacement in less than 60 seconds. A single fixed-speed motor powers either a single track or multiple tracks in line. It is also available is a two-speed motor that provides pallet deceleration and acceleration through the stops. One corner module turns the pallet 90 degrees between Linear Tracks. Two combine to turn the pallet 180 degrees in a very short radius. Each turn maintains pallet orientation so that automation and pallet code positioning remain the same on either side of the line.

In addition, Lanco produces the Lanco Assembly Bench, a cost effective system for the efficient assembly of small parts. This technology was developed more than 30 years ago and has constantly proven its reliability on the job, Neale stresses. Lanco Assembly Bench is a single lean work cell that maximizes operator efficiency by eliminating non-value added repetitive motions. The results are lower cycle times, higher production efficiencies and improved part quality. The Assembly Bench is a simple cost-effective solution that requires no training and minimal maintenance. Customers can use the system immediately without any special technical support or expertise.

Because of its prowess at technical design and innovation, Lanco Assembly systems has been able to lead the industry in advanced systems that perform at optimum levels. There is no doubt the company will continue perfecting its craft to produce the next generation of high performance assembly systems.