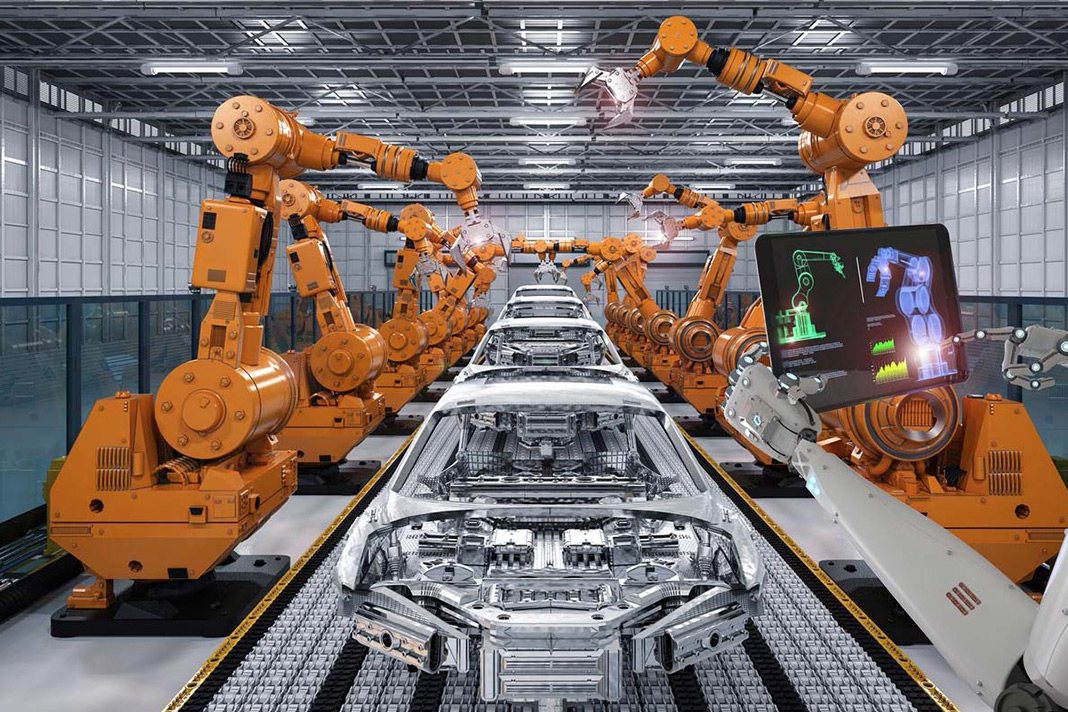 Click here to read the complete illustrated article or continue below to read the text article.

US manufacturers comprise an estimated 11.5% of the country’s over-all output and employ about 10% of the workforce, according to the National Association of Manufacturers (NAM). And while the US currently ranks second in manufacturing productivity worldwide – surpassed only by China – there is need for improvement if we are to remain competitive with overseas sources. A key driver to upgrading our standing now and in the future lies in the use of sophisticated or “smart automation” enabled by robotics.

The use of robotics in manufacturing is not brand new – in fact, large corporations including GM, Ford, and Boeing have benefitted from this technology for several decades. Today, however, robotic technologies are available to less “deep pockets” companies, making it a game changer for basic manufacturing in this country. Consider, as example, how hard tool manufacturers are working to lower costs; the use of robotics is both an affordable and practical solution to many more shops. With costs dropping and systemic integration getting easier, robotic automation will be a win-win for basic manufacturers and their customers, introducing ‘next level’ efficiencies in production, quality and cost.

Up to 50% reduction in labor cost

Since numbers often speak louder than words, consider this – robotic automation can yield upwards to a 20% – 50% reduction in cost. This savings is driven by greater production per labor hour, less rework and lights out manufacturing. Efficient, flexible, highly productive, accurate, and risk-controlled are just a few of the benefits of “smart automation” enabled by robotics. Robots can perform repetitive tasks, thereby streamlining assembly-based workflow. They can also take on jobs that may be dangerous to humans. That said; robots are able to collaborate with humans. These so-called “cobots” work alongside humans with the end result being a more expedient and efficient workflow system.

Other ways in which robotics are currently active in the manufacturing industry include “lights-out manufacturing.” This is more common at factories with few human workers; when integrated, machines handle production from start to finish and as such manufacturers can reap rewards in both productivity and labor costs.

While increased integration of robots in manufacturing remains ongoing, their use in other sectors, such as retail, e-tail (think Amazon) customer service, and agriculture can provide “lessons learned” and hold some insight for the manufacturing industry.

Recent innovations have added to robot’s facilities, enhancing the type and measure of tasks they are now able to perform. Robots used in basic manufacturing can identify and select materials based on size, shape or location. Moreover, some robots contain Light Detection and Ranging (Li- DAR) sensors, enabling them to judge distances through use of laser reflections. Using integrated inspection systems assures robot production can assure quality parts made throughout the night.

While the advantages of manufacturing robots are many, the “human factor” must be taken into consideration. Some question “at what cost” does increased implementation of automation have on workers whose jobs have been or will be taken over by technology, despite the ubiquitous “we’re hiring” signs seen on the lawns of manufacturing facilities across the nation. It’s true that machine operation, assembly line, packing and shipping are the manufacturing related jobs most impacted by the evolving technology of robotics.

That said, having automation systems in place during the pandemic when stringent in-person restrictions were common turned out to be a financial savior for many manufacturers now challenged with finding people to refill assembly and factory posts. Couple this with an aging and retiring skilled labor workforce and therein lies the perfect equation for change, for with advanced technologies comes the need for skilled employees who are willing to learn and perform these processes. New types of jobs are being and will continue to be created by the widespread adoption of automation, including the programming and operations along with the mechanical and software maintenance of robots.

Attracting a young (and not so young) workforce

Emerging technologies such as robotics are attracting a younger manufacturing workforce, sometimes referred to as “new collar.” Generally speaking, new collar jobs are defined as skilled positions that don’t necessitate a Bachelor’s degree but do require some degree of technological acumen. Indeed, the skills needed to manage, program, and operate automated technologies are advanced and require updated training, therefore jobs in these new technologies are attractive to both the vocationally trained and college educated.

This necessary shift in skill set resonates with younger workers who, growing up in the digital age, are naturally adept at working with automation. The need is evident for a new breed of workforce, trained and educated to work alongside robots – a marriage of man and machine. This is not to say that the present and future of automation in manufacturing rests solely on a young workforce. The ability and desire to learn does not have a cutoff date! Workers of all ages can build new skills by embracing advancing technologies. Being able to adapt – companies and employees alike – is critical to being and remaining relevant in work and life, in general.

It is more than likely that the future of manufacturing in this country will feature both automated and human labor – sometimes working apart, more often working together – but both essential to creating a cost parity for the United States while maintaining our quality advantage.

About the Author:
Ron Gerace is CEO of Precision Design Engineering in Wareham, MA.