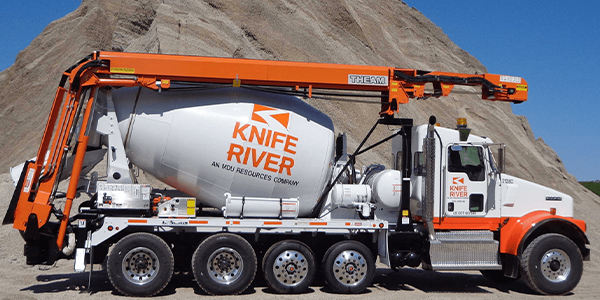 The Knife River, in central North Dakota, holds a unique place in American history. In winter of 1804-1805, the Hidatsa and Mandan Indians hosted the Lewis and Clark expedition near the junction of Knife River and the upper Missouri. It was there that the explorers met Sakakawea, their Shoshone Indian guide.

The spot is also of great importance to the natural history of North America. The Indians found Knife River’s stone deposits to be ideal for making flints, arrowheads, and knives. Today it’s a fitting place for the headquarters of one of nation’s largest aggregate mining companies.

Knife River Corporation, Bismarck, N.D., is part of MDU Resources Group, Inc., a diversified natural resource based company. “We work in natural gas and oil acquisition, exploration, production and development and we have a network of pipelines that move that product to the customer. We generate and distribute electricity, and we build transmission and distribution lines as well as wire buildings and provide specialized equipment for infrastructure construction. The construction materials and mining business evolved from our coal mining expertise,” says Linda Donlin, director of communications and public relations for MDU Resources Group. “All of these things are infrastructure related so our positioning statement is ‘Building a Strong America.’ That is what we do with all the products and services we provide – help keep America and its economy strong.”

Knife River Corporation started in 1917 and has been part of MDU Resources Group since 1945. Over the past two decades, the company has made some important decisions and acquisitions to position it for the future, including divesting its coal mining operations in 2001.

“The kind of coal that we were mining in western North Dakota and eastern Montana is lignite coal, which has a high moisture content and presents some challenges from an environmental standpoint,” explains Knife River Corporation President and CEO Bill Schneider. “The higher-quality, subbituminous coal out of Wyoming and Montana placed us at a disadvantage. So the long-term decision was made to get out of coal mining and to get into aggregate mining. We have taken that mining expertise and transferred that knowledge base into a new business line.”

Since 1992, Knife River Corporation has purchased more than 50 construction materials companies. The decisions have helped the company ride favorable trends in the economy, the construction industry, even in public funding, and boosted revenues to more than $1.3 billion last year. With its organic growth and acquisitions, Knife River Corporation is the sixth largest sand and gravel producer in the U.S. and the tenth largest producer of aggregate (hard rock, sand and gravel). It sold 43 million tons of rock last year.

“If you look at aggregate consumption in the U.S., it’s been a good decision (to focus on that production),” Schneider reflects, noting that it’s not a snazzy subject for cocktail party conversation but aggregate is the basis for construction of highways and building foundations. “It’s a product that has been in increasing demand over the last 20 years.”

All in the Family
You don’t normally associate a heavy industry like mining, with its huge crushers and conveyor equipment, with being a family-run shop. Indeed, Knife River Corporation is a public company, but with a hometown business orientation.

“One of the keys to our success is we have purchased many family-owned companies, in some cases in existence for over 100 years,” Schneider says. “We have picked up the knowledge base, the local relationships with customers and communities and that has made us a great group of companies. When we buy a company, we publicly announce the acquisition or merger, but we don’t play that up. One of the highest compliments we get is when people don’t know we own a particular company. We feel our role is to be in the background using our size and economic strength to help in business relationships but to keep the local identity.”

The inherent quality and properties of the hard rock is absolutely critical to the success of Knife River Corporation. “One of the key factors that we always look for in the rock is hardness,” Schneider stresses. “We want the concrete or asphalt that the rock goes into to be very hard and not break down, which could, for example, cause rutting and expensive repairs in highways.” The hardness of the rock relates to the oil and cement additives used to make asphalt and concrete. A favorable, dense rock absorbs less oil and makes construction materials less expensive to produce.

Another property that affects rock quality and suitability in aggregate mining is its cleanliness since cement and oil adhere best to clean rock. Of course, the other big relative expense in mining is how deep you must dig or strip to extract the mineral. All of these factors require expert knowledge of mining and in-depth local geological understanding, both of which Knife River Corporation has fostered throughout its history and business planning.

A Stronger America
The company continues to pave its way to more business. The high quality of its aggregate and resulting construction materials have opened up markets that are closed to others. Knife River’s companies have helped build U.S. military installations, interstate highways, and major sports and business facilities.

“We do a lot of work on the military bases and a significant amount of work at airports,” Schneider notes. The company’s quality materials are currently being installed at several airports around the country including air force bases. “As you can imagine, airports have very tight specifications for smoothness, flatness and density. That is the type of stuff we thrive on and there are few competitors in that work.”

In addition to delivering to third parties, about half of the company’s mined rock is used in its own internal production of construction materials, which include concrete and asphalt as well as pre-stressed building rock used in laying foundations. Other value-added products include pre-cast concrete pipe and pre-cast tanks such as septic tanks.

Knife River Corporation doesn’t build homes or offices, of course, but it does literally lay the foundation for much construction in the West. “In some areas we have underground contracting capabilities where we will put in all the necessary utilities for a new subdivision; then we will put in the streets, sewers, curbs and gutters and basically get the lot ready for the builders,” Schneider says. The corporation’s ready-mix companies stand by to pour the foundations for the footings.

Another advantage gained by the company’s diverse, widespread and yet local expertise is its ability to obtain mining permits. “The permitting of aggregate reserves for production is a very specific skill set and that’s one of the skills we transferred from the coal company over to the aggregate company,” Schneider says. With its current permitted reserves of 1.3 billion tons, enough to last about 30 years at current production rates, Knife River Corporation has built a solid foundation of its own.