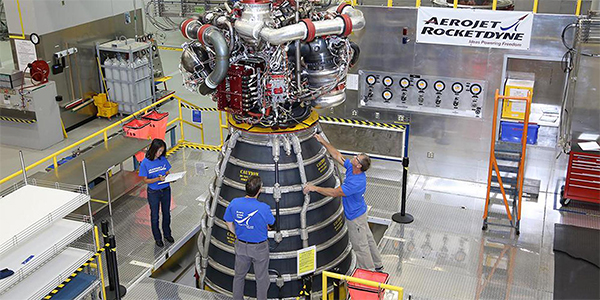 Aerojet Corporation is an award-winning company, in one sense. The year 2001 has brought a stream of news about the “awards” this unit of GenCorp has won: a $10.4 million contract award for the peroxide advanced reusable rocket engine for the U.S. Air Force’s Space Maneuver Vehicle; a $7.6 million contract to develop a reaction control engine for NASA; a $3 million contract to develop variable-thrust motors for the U.S. Army’s NetFires missiles; a $2.7 million contract for motors for the Army’s compact kinetic energy missiles. One other such award, almost a crowning achievement: In May, a newly formed joint venture between Aerojet and Pratt & Whitney won a $115 million contract from NASA for the development of reusable liquid booster engines.Aerojet wins awards of the recognition sort as well. In May, IndustryWeek chose the company’s Azusa, Calif., plant as a finalist in its 2001 Best Plants competition. In June, the U.S. Air Force’s Defense Meteorological Satellite Program gave the company a 100 percent award fee for excellent performance on its support and services contract. In a letter to Aerojet, Randy T. Odle, the program’s director, praised the company for its “continued excellence” in its integration, test and support activities.

The company’s customers clearly appreciate Aerojet’s performance on their behalf, and its parent company has expressed its delight with the company’s performance on its behalf. In his letter to the shareholders in the GenCorp 2000 annual report, Robert A. Wolfe, the company’s chairman and chief executive officer, cited Aerojet’s “continued outstanding performance on key contracts, as evidenced by the number of high (including several 100 percent) award fees received during 2000 from customers.” Aerojet was a shining star within GenCorp’s aerospace, defense and fine chemicals segment, which delivered a 45 percent increase in operating profits last year. Clearly, Aerojet is a company that meets success at just about every turn.

Launching Pad
The company has, in fact, been encountering such success for nearly 60 years. Aerojet was founded in 1942. The founders – Theodore von Karman, Frank Malina, Jackson Parsons, Martin Summerfield and Ed Forman – each put $250 into the new concern. It has since grown into a world-recognized leader in the aerospace and defense industries, in the fields of missile and space propulsion, smart munitions and armaments. Aerojet’s 2000 sales totaled more than $500 million, and the company holds some of the most significant aerospace-defense contracts in the industry.

In another respect, however, Aerojet is remaining the same. The company has created a business foundation from its core concepts of technology, teamwork and tradition. These values have been the center of Aerojet’s product development and customer service for its entire history, and will continue to sustain its future growth as well.

As with all of the major suppliers to the aerospace and defense communities, Aerojet has maintained a major investment in research and development. Not only does keeping on technology’s leading edge afford the company preferred-supplier status with its customers, but it has also become a company staple. Mention Aerojet to the original-equipment manufacturers in the commercial and military aerospace and defense industries, and the picture of the most up-to-date technology immediately comes to mind.

Aerojet provided a dramatic recent example of its ability to go ahead of the technology curve. In late August, the company successfully tested a full-scale, 67-foot solid rocket motor for 95 seconds, achieving thrust levels ranging from 285,000 pounds to 390,000 pounds. The motor is the result of more than two years of design and development work. The success of the test demonstrated that Aerojet’s design and manufacturing processes are in place for the production of a large-scale monolithic solid rocket motor. The company has slated two more hot-fire tests in Lockheed Martin’s Atlas V launch-vehicle configuration by early next year; continued success in these tests will pave the way for the use of this motor on the Atlas V and other space launch systems.

To Infinity…and Beyond
The Atlas V project also provides a demonstration of one of Aerojet’s key competencies: critical aerospace structures. Its facility in Sacramento, Calif., is one of the largest plants in the world involved in the development and production of solid and liquid propulsion structures. The company employs computer numerically controlled electron-beam welding processes, which are capable of making full-penetration welded structures of varying thickness and profile in a single pass. It can accommodate aerospace structures in an envelope measuring 11 feet by 7 feet by 7 feet in several aerospace and aircraft alloys, including aluminum and titanium castings and forgings.

Aerojet’s other areas of manufacturing expertise include multi-axis machining, fitting and assembly; extensive non-destruct inspection; and tool design and fabrication. The company can also draw upon its in-house support capabilities in assembly, preweld and post-weld machining, cleaning and etching. It can also perform dye penetrant/radiographic/ultrasonic NDI processes.

The company’s expertise in these projects has made it a featured player in a number of high-profile aerospace-defense projects. Along with the Atlas V motor, Aerojet has supplied propulsion systems to the Delta II (a second-stage system), which achieved its 200th successful launch in 1999; the Titan, which includes Aerojet-produced first- and second-stage liquid engines; the NASA X-33 Venture Star, for which it supplied the reaction control system; and the Kistler Reusable Launch Vehicle, for which it produced all of the propulsion systems including the NK33 Main Engine.
The joint venture with Pratt & Whitney, which was formalized in March, offers the promise for tremendous growth in the years to come. The two firms will combine their expertise to produce the next generation in reusable liquid booster engines for NASA and for the Air Force’s Phase II Integrated high Payoff Rocket Propulsion Technology program. Whether working alone or with other firms, Aerojet is clearly committed to advancing these technologies into the future. As long as the military needs to remain strong, and as long as this country continues its push to explore space, Aerojet will rocket ahead to develop the systems needed to make these projects happen.