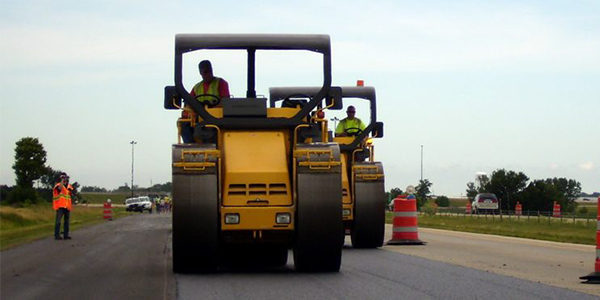 Effington County, Ga., had a project on its hands: dirt roads that needed to be upgraded and paved. The crux of the program entailed using a heavy amount of ash aggregate, spread on the roadway to a depth of approximately 12 inches. The downside was that ash aggregate could form lumps that potentially could cause trouble, catching on a motorgrader blade during final grading and tearing and damaging the road surface.

But, according to an article on the resurfacing project in a recent issue of Dixie Contractor, the dilemma was easily solved after officials from Sakai America of Adairsville, Ga., put their heads together to devise an innovative solution. First, Operations Management International had rented a Sakai SV510TB vibratory sheepsfoot roller because of the machine’s ability to break up the lumps, improve compaction and eliminate problems the lumps may have created during final grading. However, the standard padfoot roller did not get the job done and Sakai engineers had to provide a custom solution to the problem. What they did was design a cylinder that when welded on to each pad created a needling action that broke up the lumps and created a smooth surface that was then gradable.

It’s just one way in which the leading producer of vibratory rollers in the world solves compaction problems.

Sakai, a company with roots extending to 1918 in Japan, produces a line of highly regarded soil compactors that offers the high forces required to reach density fast while increasing productivity and profitability. In addition, the company manufactures a full range of smooth, padfoot and combination drums are for all soil conditions. The company manufactures single-drum dirt machines and double-drum asphalt machines; some with vibration for asphalt or dirt and other static, pneumatic or three-wheel varieties.

Sakai originally was formed to produce locomotives in Japan; in 1956, it began to manufacture vibratory compaction equipment and has gained 65 percent market share in the Pacific Rim. Involvement in United States marketing began in 1976 in New Castle, Del. In 2001 the operation was moved when an 80,000-square-foot manufacturing facility containing an additional 16,000 square feet of office space was constructed on 42 acres in Adairsville.

At that time, Sakai began focusing intensively on dealer programs and intensified its sales efforts, a direction that has worked favorably for the company in its competitive market. In the last two years, Sakai made the decision to expand its operations globally, opening a plant in Indonesia. Currently, 70 percent of its business is in Japan; the rest is in the North American and Indonesian regions. “The reason the company decided to look globally,” remarks Dave Brown, vice president of sales and marketing, “is that the compaction market in Japan started to dec-line 10 years ago. The U.S. market declined as well but is now stabilizing.”

While market forces fluctuate, Sakai continues to hold steady as an innovator in the compaction business “These machines are known has having very high quality, durability and reliability,” says Brown, adding that some Sakai machines, upwards of 26 years old, remain in daily operation.

Smooth surfaces
Keeping operable following decades of use speaks volumes for a Sakai roller, which needs to roll a perfect surface time after time. The important aspect of a vibration roller, Brown explains, is the impacts-per-foot it can deliver for density and smoothness on the asphalt surface. Most asphalt machines get 2500-3300 vibrations per minute; in 1999 Sakai introduced, at ConExpo, its SW800 series asphalt rollers that generate 4000vpm. In terms of speed, this does a world of good for paving contractors and operators because the machine can travel at 4.5 m.p.h. – a snail’s pace to motorists but equal to racing speed for Superpave Rollers on Interstates where the asphalt needs to be compacted before its temperature drops to under 260 degrees. The additional speed of operation increases production of tons of asphalt compacted per hour. These machines also offer unique counter rotating eccentrics that eliminate shoving and cracking of the asphalt surface.

Sakai produces more compaction equipment than any other company (the measurement of compaction equipment is centered on the width of the drum, which relates to how much ground is being covered). The company’s range of products include:
• 4000VPM double-drum vibratory rollers designed to make density quickly on SuperPave and other HMA mixes; machines come in double drum widths of 67 inches, 79 inches and 84 inches, which increases roller ground speed and maintains the required 10 to 12 impact-per-foot.
• The SV single drum soil compaction series is available in 54-inch, 67-inch and 84-inch models.
• SV510DC-1, the world’s first track-driven vibratory soil compactor was introduced at ConExpo in 2002. The track drive gives the machine the necessary traction, gradability and stability to climb steep slopes, up to 45 percent continuously or 62 percent intermittently while compacting.
• The SW300 series is comprised of mid-sized, double-drum vibratory asphalt rollers produced for public works and smaller compaction jobs. These machines offer a speed of 4000VPM, and allow the operator a choice of increasing the ground speed while maintaining 10 to 12 impacts-per-foot spacing. The counter-rotational eccentric system in the compaction drums promote a smooth surface finish with forces always directed downward into the material.

Sakai’s lines of vibratory rollers are produced with an articulated or rigid frame; there also are three-wheel or pneumatic tire rollers; hand operated compactors that come in walk-behind, double-drum, plate compactor and rammer varieties. Road maintenance equipment, including a road cutter and road stabilizer and asphalt finisher and sprinkler, are available in Japan but on a limited basis in North America.

At the spring’s ConExpo in Las Vegas, Sakai introduced a new line of vibratory rollers – the first entirely manufactured in the United States. The SV400 series consists of four different 67-inch-wide models for a wide range of soil compaction applications: smooth drum models for granular and non-cohesive materials; padfoot drums for cohesive, silt and clay materials; combination smooth/padfoot convertible drums for all applications and strike-off blades for trench backfill and other medium-duty soil moving applications. All models have both wheel and drum drive.

The SV510 series is the largest of soil compactors available in 84-inch-wide drums, offering a full range of smooth, padfoot combination, and strike-off blade machines. It is available in the same configurations and features as the SV400 model.

The SW800 is a 67-inch-wide double drum asphalt roller featuring 4000 vpm; the SW850 is a 79-inch version of the 4000vpm double drum vibratory rollers. The SW900 is the largest 4000vpm roller available in the world. The 84-inch-wide double drum covers more asphalt mat in fewer passes than any other machine; the wider mat coverage combined with 4000vpm and faster ground speeds means high productivity and cost effectiveness.

The SW300 series is a line of 4000 vpm rollers extended into mid-sized double drum rollers – 39-inch, 47-inch and 51 inches in width – for municipal, county and state highway applications, golf course, tennis court, parking lot, jogging trails and other small-to medium-sized jobs in which faster compaction and a smoother finishing is required.

The new vibratory embankment roller, the SV510DC, is the only track-driven vibratory soil compactor in the world. An extension of the 84-inch soil series, the machine is specifically designed for superior traction on steep slope applications like embankments, earthen dams and landfills where additional winching machines and manpower would normally be required. “The SV 510D is the largest selling smooth drum roller size going,” says Brown.

What this all means to the customer is value. Says Brown, Sakai has earnestly built a reputation, since its inception, of building machinery that is durable and reliable and has gone the extra mile to ensure this quality in every single piece of machinery, right down to the nuts and bolts.

“This company has been, and will continue to be, a leader in the business,” Brown says, and this is evident in the consistency of new and improved product offerings. It’s a good bet that where there’s a material that needs to be compacted, Sakai will have a machine there to do the work.