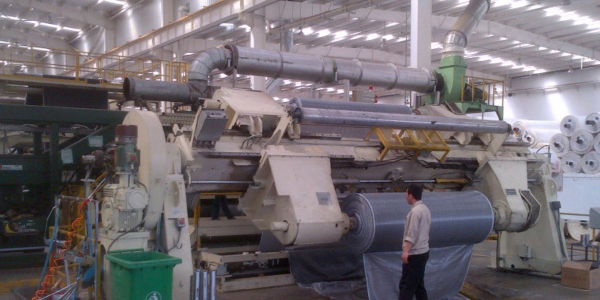 At first blush, there’s a not a lot in common between sandbags, the low-tech way that mankind has protected communities from water for centuries, and a state-of-the-art roof underlayment except for an innovative company that has made both of them, the Canadian-based InterWrap.

Around the start of the decade, InterWrap, which is headquartered in Mission, B.C., rolled out its high-tech TITANIUM™ UDL, which one expert has called “the most significant development in roofing products since the advent of the fiberglass shingle.”

Another writer has called InterWrap‘s TITANIUM™ UDL a “Tyvek® for the roof” because it is much lighter in weight than traditional felt roofing material but many times stronger. The synthetic asphalt-free product comes in four-foot rolls, rather than the traditional three-foot size that felt paper does, so it installs faster, and its light gray color reflects sunlight and can stay exposed for up to six months.

Officials at InterWrap are very enthusiastic about the new technology, which is rapidly gaining in popularity across North America, especially in the booming residential housing market in the United States. “For the last 50 years, paper based builder’s felt was the standard in the roofing industry,” said Russ Robson, the director of marketing for InterWrap. He said while InterWrap was not the very first to supply the synthetic roofing underlayment market across North America, it is now a leader in the region.

Safety first
While InterWrap didn’t make the first synthetic underlayment, it has made it better. For example, one feature that sets it apart from the competitors is its SURE-FOOT™ technology, which makes the InterWrap product the safest to walk on in both wet and dry conditions, and makes it appealing to roofers whose number one priority is worker health and safety.

Yet another safety feature is the high anti-slip undersurface, which prevents sliding on decks before the underlayment is fastened, yet another engineered advantage for the roofer that is not available on any other synthetic. Although it’s hard to imagine, this state-of-the-art, 21st century product hails from a firm that got its start making arguably the ultimate low-tech device, sandbags. In the 1970s, the firm’s two founders, Rob Milne and Dave Shokar, had worked together at a chain factory in British Columbia. In 1983 Rob and Dave got together and decided to branch out on their own. In February 1984, the two leased a 12,000-foot facility in Richmond, B.C., a suburb of Vancouver, and launched InterWrap.

While sandbags were the company’s first staple product – company officials used to joke about praying for rain – InterWrap soon established itself as a leader in another field that presented a lot of opportunities in the Pacific Northwest: manufacturing lumber wraps. These bags, which look a little like traditional burlap on the outside but are much stronger and protect lumber products from the elements in shipping, were picked up by a large customer, Sierra Pacific, and quickly became InterWrap’s biggest product. Still, the lumber bags largely involved assembling raw material that was made elsewhere, and the market became more competitive since global barriers to trade had been reduced.

Looking to the East
“In the last few years, we have started to branch out into different products, but the lumber wrap is still the core for us,” Robson explained. Around 1990, InterWrap started making its own fabric, and more recently it has added a second facility in India. Now, InterWrap markets itself as a fully integrated, global manufacturer of extrusion coated wovens and diverse multi-layer laminated reinforced plastic substrates. In addition to its two factories, InterWrap also operates strategically located distribution centers throughout North America and Europe.

Robson said that InterWrap, which is still a privately held firm, now employs roughly 350 people at the South Asia site, on top of roughly 350 at the firm’s main facility in Mission, B.C. He said that the India facility makes the same products as the Canadian plant, with both locations servicing the global market.

“The company has had terrific growth over the years,” said Robson. “I would say that it’s responsiveness to the market. We’re very uncanny at giving the customers what they want and changing our products to their needs. We have excellent customer service, and so we’re also more responsive in that way than a lot of companies. Even though a lot of them are not high-tech products, we do a lot of small innovations for our customers.” He added that new product development is now a major focus at InterWrap.

For example, InterWrap supplies superior quality roll stock fabric to leading converters in the market for a variety of demanding industrial applications. The company’s RhinoSkin™ line of industrial fabrics is designed for maximum strength and performance.

Interwrap also has patented technology called KORIN™, volatile corrosion inhibitors or VCI that helps prevent the corrosion of flat rolled steel, plate, bar, and wire when added to its products.

From its earlier, simpler lumber-wrap products, InterWrap has evolved to ECOZORB, a newly patented polyzorbent lumber wrap with mold inhibitor that the company advertises as “very likely the most advanced wood packaging wrap in the world.” ECOZORB has far superior moisture absorption and strength properties as compared to kraft paper, but is 100 percent plastic and fully recyclable.

Getting lean
Robson said that in order to produce its growing array of product lines more efficiently, the firm has aggressively pursued the principles of lean management to reduce its labor costs, Robson explained. “We’ve been using consultants to try to help us in becoming more lean. Part of that lean process involves changing our culture, and that part of it is a team based process called Kaizen, which essentially is a way to create value through the elimination of all types of waste, and it’s quickly becoming a way of life at InterWrap.”

The recent streak of weather catastrophes in the world, culminating in the tragic events of last year’s Hurricane Katrina, has led to a major surge in demand. But InterWrap, which has been active in civic affairs back home, has also made substantial charitable efforts in response to the global calamities. Workers have donated time to make tarps and other badly needed items.

Ironically, things have come full circle, in a way, for a company that started out with sandbags.