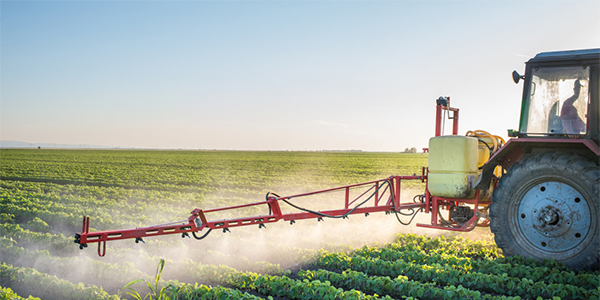 If you’re like everyone else this time of year, one of the products turned out by the Monsanto Company’s Muscatine, Iowa plant is probably in your tool shed or garage. Unless you live in a desert, you probably have plenty of weeds, and there’s a good chance that you’re reaching for the Roundup® right now.

While the heavily advertised and highly effective weed killer is probably the best-known product turned out by the St. Louis-based Monsanto’s agricultural business, “It’s really a small percentage of our total business,” confides Todd Heber, human resources manager at the Muscatine plant. Indeed, much of what Monsanto Muscatine does is produce herbicides and other products for the commercial agricultural industry. (Muscatine, incidentally, is said to derive its name from the Mascoutin Indians, which translates as “Fiery Nation”.)

Monsanto itself dates all the way back to 1901, when it was launched to manufacture saccharin. Vanillin and caffeine were other early products. Monsanto began operations at Muscatine, located on the Mississippi River just west of the Quad Cities, in late 1961 with the start-up of an anhydrous ammonia storage terminal. Production facilities for ammonia followed the next year, and the plant graduated into herbicide production in 1964. A real milestone came in the spring of 1968 when production of the herbicide Randox was discontinued and production began on Lasso, a new herbicide that quickly became the staple of the facility – and the industry.

The Muscatine plant has been continuously upgraded and expanded with the roll-out of numerous new products ever since, including the introduction of the herbicide Harness® (Acetochlor) in the United States in 1992 and Roundup (Glyphosate) five years later.

In the 1980s and 1990s, the company developed a new approach to producing formulations. In 1997, Monsanto added a new Glyphosate technical facility in Muscatine, since expanded twice, with a total investment of more than
$60 million.

Today, besides Roundup and Lasso®, its brands include the Machete® and MicroTech® herbicides. Muscatine plant manager Oscar Berryman, a 20-year Monsanto vet, calls Lasso one of the company’s early “star” products. It controls annual grasses – more than 20 annual grasses and small-seeded broadleaf weeds and nightshade – before they emerge in corn, soybeans, peanuts, grain sorghum and other labeled crops. Lasso is a member of the Alachlor brand family, which also includes Bullet®, MicroTech®, and Lariat®.

Not resting on any laurels, the company also is “continuing to improve the Roundup formulation,” according to Berryman. “Since it came off patent, a number of companies have been selling Roundup ‘clones,’ so we have to continue to improve it to differentiate it from the competition.”

“On the seed side of the business, the biggest focus is on biotechnology – developing genes and traits that will improve productivity for farmers,” Berryman explains.

Besides the Muscatine plant, the agricultural group has a major manufacturing facility in Luling, La., and a feeder plant in Soda Springs, Idaho, the subject of an earlier profile by US Industry Today. The company ships its products throughout North America, as well as Central and South America, Europe, Southeast Asia and Australia.

Besides specific products, the company today also is focusing on optimizing its manufacturing processes, adding what company executives call a continuous technological process. “We have gone through a growth period, and we are going to continue to focus on optimizing and processes, maximizing the benefits from the investments we have made,” Berryman explains.

“The newer technology, which we have implemented, has significantly increased our capacity while providing environmental benefits,” he continues. “It has reduced the amount of waste we generate from our process while consuming less energy.”

On the corporate level, changes are in the works for Monsanto. In 2000, the company merged with Pharmacia-Upjohn, which has combined its own pharmaceutical units with Monsanto’s GD Searle unit under the single name. Pharmacia Corp. is based in Peapack, N.J. The agricultural operations retained the Monsanto name and continue to be based in St. Louis. Pharmacia owns 85 percent of Monsanto’s outstanding stock, which is publicly traded on the New York Stock Exchange, but plans are in motion to spin Monsanto off as an independent company this fall, according to Berryman.

On both the corporate and plant level, there are several key themes that run through the way Monsanto does business. One of those is safety – the Muscatine plant has won 14 Monsanto Global Safety and Health Awards, and is an OSHA VPP “Star” recipient.

“We embrace safety as one of our core values,” Berryman says. “A value is something we don’t sacrifice. Our operations are important, but we will not sacrifice the safety or well-being of our employees, visitors or anyone in this community.

“We have made a commitment to operate our facilities worldwide in such a way that we have no impact on the environment or the community in which we operate,” Berryman says. “We have made a pledge to reduce emission sources and waste generation from our processes.”

Monsanto’s Muscatine plant is located on a 555-acre site, of which 150 of which are developed. Indeed, a major portion of the site is a nature preserve. Of the 510 acres that make up the Big Sand Mound Nature Preserve, 90 belong to Monsanto (MidAmerican Energy owns the rest). Another 100 acres make up the employee-maintained Sand Prairie, and employees similarly maintain a Butterfly Garden, established four years ago.

Altogether the plant has about 500 Monsanto employees, along with between 100 and 150 light industrial and maintenance construction contractors.

Ultimately, Monsanto Muscatine is about people – another key theme for Monsanto. “Our employees are the most important part of our business – they’re what give us a competitive advantage,” Heber says. “We work at providing good benefits and jobs with good pay for people in the community.”

“We have programs and systems in place to help develop and continuously improve our employees,” Heber continues. “Everyone here has development and performance goals and are assessed on those goals. We have an incentive plan, we give bonuses to employees every year, and everyone is eligible. We have also given employees stock options, which drives ownership behavior in the company.”

And most of those employees are involved in the community in one way or another, including maintaining the nature preserves. There is a local community relations network, which Heber sponsors at the Monsanto plant. Monsanto employees do everything from teaching biotechnology courses in the local schools, to conducting highway and river beautification cleanups, to getting involved in Muscatine Great River Days and participating in a July 4th float parade.

Berryman is on a number of boards including United Way, Junior Achievement and the Muscatine Development Corp. And Heber himself is on the board of a non-profit organization called Crossroads, which helps obtain employment and otherwise support disabled people.

It just doesn’t stop with Berryman and Heber. Numerous employees from the plant are active in the community and serve on various boards, civic groups, and local government positions.

The bottom line is that “we want people to know that we’re the industry leader in agricultural technology,” Heber says. “We are also stewards for the environment, for safety and for health. That’s what we’re all about – making good products and taking care of the community and the people in it.”

“For Muscatine, the success that we’ve had over the last 40 years has been because of the people who work here,” Berryman concludes. “The people here have a lot of pride in what they do. I’m proudest of the fact that I work with a great group of people who would do anything to make this plant successful, and do it the right way.”