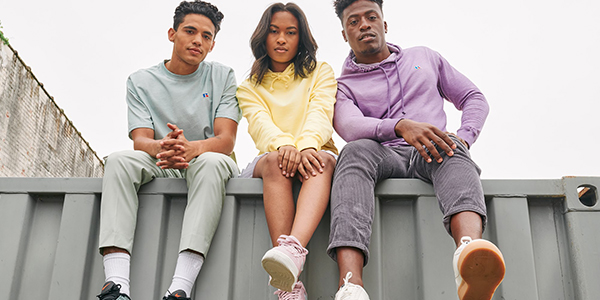 Behind every athlete are endless hours of training. The risk and reality of injuries. The sacrifices of time and energy poured into the quest to improve performance. And most of all, the mindset that striving for excellence is what life is all about. These athletes do not take shortcuts to success and have earned our respect both on and off the field.“We believe that our brand is about the purity and glory of sports. We’re not about flash. We’re not about hype. We’re about the hard work that all real athletes put in so that they can be successful,” says Rod McGeachy, vice president of marketing for Russell Athletic and general manager of the Bike brand.

In football, there’s an understanding that those athletes who are motivated by individual recognition over team success often showboat in the end zone. The true competitor flicks the pigskin to the referee because he’s been in the end zone before. That’s the guy wearing Russell Athletic gear. In today’s negative climate of pampered and overpaid superstars, not to mention drug and legal scandals, Russell Athletic positions itself as the authentic antidote, the real deal. The marketing distinction is critical in a hotly contested sports apparel business. “The Russell brand has always been associated with consumers to mean comfort, durability and quality. Those are great attributes, but they’re not always differentiating qualities,” says McGeachy. “Our challenge is, we compete in a very noisy, crowded category with a lot of big spending (sports shoe companies). “We want to establish a unique and compelling brand position in the minds of our consumers,” he says of the intense competition. “The untold story behind Russell Athletic is we are really a true, authentic athletic brand.”

So authentic, in fact, that Russell is the uniform supplier for about half of the major league baseball teams, along with more than 200 Division I college teams in all men’s and women’s sports including 70 Division I hoops teams. The company estimates that one in three high school athletes wears Russell uniforms across all sports, for boys and girls.

The message is clear in the company’s new tag line for its national marketing campaign: Are you Russell material? “The double meaning is not only about the fabric of the garment but the fabric of the individual,” coach McGeachy says. The company’s rejuvenated, $20 million national media and consumer marketing campaign is the largest of any non-footwear sports brand. The plan will continue Russell Athletic’s TV presence during the college football season and add print and interactive media, national promotions and consumer marketing, and stadium signage throughout the year. Watch for Russell on espn.com, yahoosports.com, and si.com.

Team Spirit
Russell Athletic is just one member of the Russell Corporation team athletic brands with operations throughout the world including Central America, South America, Asia and Africa.

The acquisitions are part of the company’s vision to move from a manufacturing company to a consumer-marketing company.

“We have embarked on a strategy to transform the company from an apparel company into an athletic company and that change in strategy has opened up a whole new window of opportunity for us to grow through acquisition,” McGeachy says. “That’s why you see us buying Bike or Spalding and getting into categories that are not apparel and may not have back-end synergy but have a lot of front-end synergy with our authentic athletic offerings.” The product lineup supports the corporate game plan with new performance active wear, sporting goods and gear for athletes. Some recent launches by the Russell Athletic brand embody the corporate vision, marketing strategy and brand positioning.

One example is DriPower, a moisture management material for t-shirts and other sports apparel rated the most effective in the industry. A high-tech wicking action pulls sweat from the skin for comfort and performance to keep the athlete drier and lighter with full freedom of movement.

In the fall of 2004, Russell Athletic will launch Sweatless Sweats, moisture fleece for the team sports market as well as the broader retail market. This is the first product on the market to bring moisture management to fleece,” McGeachy says. “We’ve found a moisture management fiber that we have knit right into our fleece, unlike other performance treatments that often gets sprayed on to the garment or finished after the garments are assembled.”

The Bike line of sports medicine and protective underwear and gear is adding some high-tech products of its own, including a new type of neoprene. That’s the material of the black rubber elbow and knee supports that you see athletes wearing all the time. Traditionally, these support products risk odor and slippage from sweat. But Bike has come out with Aeroskin, a brand that reduces those problems and prevents skin irritation by channeling moisture out from under the rubber.

Another line, Diamond Legends, dusts off the handsome designs of minor league uniforms of stars including Willie Mays, Yogi Berra, Jackie Robinson, Johnny Bench and Tom Seaver. These guys didn’t just burst onto the scene as all-stars and MVPs, they had to put in the work, just like every athlete does. The Legends lines are a clear expression of Russell Athletic’s brand philosophy that stresses the training that goes into becoming an athlete. The popularity of throwback jerseys shows that consumers appreciate the by-gone days of sports and yearn for a return to the glory days when hard work was rewarded.

Expect Russell to score a victory with its new consumer marketing plan to reinforce its positioning as an authentic, athletic brand that stands for what is right and good about sports.

But don’t look for famous superstar athletes in Russell’s advertising. It’s not the company’s style to spike the ball in the end zone. “We are focusing our efforts on building our brand and communicating the true meaning of Russell material,” says McGeachy. “We are trying to establish an emotional connection with our consumers that sets us apart from the competition.”