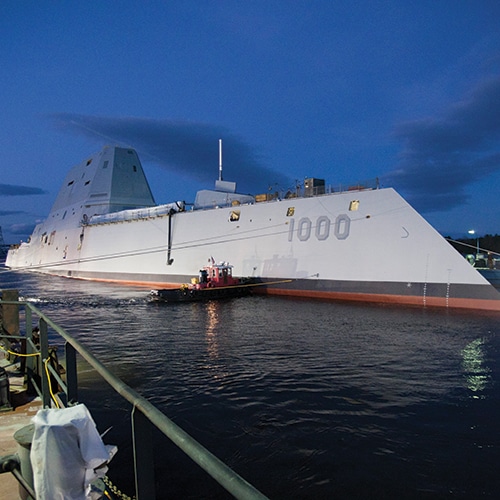 DRS Technologies is a leading supplier of integrated products, services, and support to the military forces, intelligence agencies, and prime contractors worldwide, and has been doing so for quite some time. In fact, every U.S. warship since WWII have utilized their products in one way or another, and as they continue to progress well into the 21st century, their mission to provide state-of-the-art solutions and services has only strengthened even more.

The U.S. Navy, today, still represents the strongest sea-based military force in the entire world. With their ships and submarines cutting through waters all over the planet, performing operatives near and far, one of the most significant aspects at the core of their effectiveness is the presence of viable and reliable logistics inside all of their marine vessels. In terms of their power supply systems, the U.S. Navy and the Coast Guard, by extension, look no further than DRS Technologies when determining whom to depend on for their needs.

In fact, the company does most of its business with the U.S. Navy and Coast Guard, although South Korea has become a growing customer as well, with almost 60 percent of their product line going to surface ships, and the remaining 40 percent utilized in submarines. The products they sell and install on these ships and submarines include power distributors, power converters, motor controllers, and motor operators.

“While our products and services can certainly be applied elsewhere, we’ve really found success in providing services and solutions to the defense market,” Lindenbaum says.

One of DRS technology’s most cutting-edge products is their Integrated Fight Through Power (IFTP) system, and it’s only fitting that it’s to be integrated in one of the U.S. Navy’s most advanced ships ever, the DDG-1000, which was just launched at the end of October 2013. The IFTP system will not only do directional distribution and conversion, it will also have the ability to dynamically reconfigure the ship based upon real world changes. These changes could be in the form of physical damage undertaken, casualties suffered, or simply the desire to modify the ship from someone onboard.

The IFTP will automatically provide the appropriate power in the proper format at the right time, and does this instantaneously without any human interaction at all. “So if you were to lose a portion of the ship for whatever reason, the system can dynamically reconfigure itself to take into account what damage has occurred and will basically fix itself to maintain functionality, such as isolating a short circuit,” Lindenbaum says, noting that the technology “works in a manner that humans aren’t capable of, and the chance for human error is effectively eliminated.”

With much of their business being done with the military, much of the research and development that goes into their power and controls products and services is done in partnership with the U.S. Navy at their research offices. “We understandably have a very close working relationship with the U.S. Navy and in working with them, we are able to get a much better sense of what the general market wants and needs,” Lindenbaum says. He says that listening to the voice of the customer prior to and after development is essential because his company’s research and development in itself is always meant to be complimentary to what the customer ultimately wants.

So once they’ve done their research and development, where does the actual production happen for DRS’ power and controls technology, and by whom? Operating out of their headquarters in Milwaukee, Wisc., for the last 50 years, the company employs over 350 individuals who work hard every day to design, develop, and manufacture traditional hull, mechanical, and electrical solutions for the military.

Much of their efficacy, like most modern manufacturers, stems from having a capable facility to work out of, and the utilization of effective lean programs to keep everything moving along smoothly. Their facility has recently has been upgraded, as Lindenbaum says they have “modernized over a third of the footprint in order to make it as economical and efficient as possible,” adding that, “it has everything you’d want out of a modern factory.”

He says that they rely heavily on lean manufacturing, focusing on the benefits of Six Sigma and KAI-ZEN. Lindenbaum says that each of these programs are significant factors in the company’s manufacturing equation, as their “manufacturing floor is divided into two areas, development and routine production.”

He says that the two sections proceed on different timelines, and the lean practices they employ allow each to interpret statistical analysis, drive out costs, and operate more efficiently overall according to their schedules.

Lindenbaum said an additional aspect that makes his workforce so effective is the level of immersion his company’s engineers have in the early parts of the developmental process. “Our engineers are brought in right at the beginning, and are there every step along the way,” he says, noting that, “so when we win a contract, our engineers already know everything that’s going on and don’t have to be brought up to speed at all.” By bringing them in the early stages of the process, Lindenbaum says they can “hit the ground running” when it comes time for production and allows them to not only stay on time with their projects, but even sometimes finish ahead of schedule.

He credits much of the Milwaukee-based factory’s dynamics to the company’s vice president and general manager Steve Johnson. Johnson, a retired two-star Admiral in the U.S. Navy, specialized in submarine development and construction for most of his life. With a degree in nuclear engineering, as well as in accounting and computer science, he brings a combination of business acumen and extensive naval experience to the company, something of great significance when the company does most of its business with defense enterprises. “When you add those assets up, he brings a lot to our company and he’s been the one behind us making development and production routine and driving the costs out, without mixing the two.”

With a strong employee force featuring credible and knowledgeable individuals like Johnson, DRS power and controls technology have experienced a growth of almost 18 percent in the last year alone. As a result, they have been able to take their success in providing below-deck services and solutions for the surface ships and submarines and expand their impact to other areas of these vessels as well. Lindenbaum says that his company recently won a contract which will have them supplying power for radar and electronic warfare systems on the top side of ships, specifically the installation of single generation operations on guided missile destroyers for the DDG-51 class.

It’s something they may not have done a lot of business in previously, but have possessed the capabilities to do so nonetheless. “We competed for the contract and won, and I think it helped that we have earned some classified programs relating to such before. But this is the first time we’ve been able to win a combat systems power opportunity for surface ships, and it’s quite exciting.”

Lindenbaum says his company takes pride in these contracts, as it allows them to seize the opportunity to show customers just how much precision and durability his systems have. “One of the contracts we’re currently involved in has a service life that extends all the way until 2080, and I think that’s a testament to the quality of the work we do,” he says.

He believes the future is quite bright for his company, and it all stems from effectively aligning DRS’ power and control services with the needs of the customer. Continuing this practice, Lindenbaum says the possibilities are endless for his branch and he only sees his business continuing to grow. And, with some contracts as noted to be extending through 2080, it appears to be a safe bet that DRS power and controls will be positively impacting the way ships operate and run for many years to come.