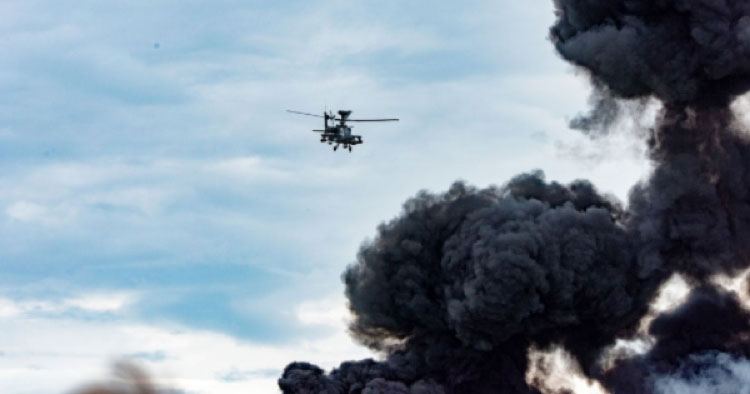 The recent explosive attack on Saudi oil facilities has sent ripples throughout the global oil industry. With 17 explosions noted so far among two oil sites, some of the facilities’ structures will be irreparable following the attack.

NPR explains that the larger of the two facilities is one of the most important oil producing sites in the market today. According to them, Abqaiq has been a long-targeted site by opponents, though any attacks have been subverted by Saudi intervention. Until now.

The attack was claimed by Houthi rebels in Yemen, though sites like NPR were skeptical from the start. This hesitation grew when the Houthi spokesperson claimed that only 10 drones hit the oil facilities, not the estimated 17. Additionally, the crafts had supposedly launched from the northwest and Yemen is located to the south of the oil facility. While launch site doesn’t necessitate blame, this fact led analysts to believe that Yemen had nothing to do with the attack.

And Act of War By Iran?

Now, U.S. Secretary of State Mike Pompeo claims that the attack was an act of war by Iran, not from Yemen rebels.

Iran has denied involvement in the bombings. The country leader has also warned that retaliation would ensue should the United States target Tehran.

In the meantime, this attack’s ripples could turn to waves in the United States’ economy. While the oil market is expected to grow to nearly $15 billion by 2022, the threat of rising gas prices could slow growth in a number of sectors, including plastics and transportation. The attack had crippled nearly half of Saudi Arabia’s oil output, putting more than just oil production at risk.

However, Trump has taken action to prevent this price hike from occurring. In light of the attacks, Trump has increased sanctions on Iran which has kept oil prices at a low level despite the disruption. According to Saudi energy minister Abdulaziz bin Salman, the kingdom has managed to restore up to 50% of oil production lost from the attack. He estimates that Saudi Arabia will soon produce up to 12 million barrels of crude oil per day (bpd) by the start of December.

U.S. markets have managed to maintain its levels, as well. The United States relies on oil to power up to 60% of the country’s energy and Trump isn’t trying to impact the nation’s current lowered costs. Luckily, CBS notes that there has been an unexpected rise in profits thanks to increasing crude oil inventories. Since the United States was expected to lose more than 2.5 million barrels in the days after the attack, analysts were surprised to see inventories rise by about 1.1 million within the last week.

Saudi Arabia also believes that Iran was responsible for the attack on Abqaiq.

Prince Khalid bin Bandar goes on to note that “We are trying not to react too quickly because the last thing we need is more conflict in the region.”

Trump has followed suit. According to CBS, he has tweeted that he will not rush to respond to the attack on Saudi Arabia though the drone debris looks like Iranian aerial vehicles. This was a stark shift from his tweet the day before when he mentioned the United States was “locked and loaded” following the incident.

Since then, the U.S. has announced that we will send troops and missile defense to Saudi Arabia and the United Arab Emirates. Estimates gauge that we will likely send hundreds of troops to aid in the defense of the kingdoms.

New reports highlight that Britain has also declared that Iran is responsible for the attack. In the hope of de-escalating the conflict, Prime Minister Boris Johnson has said that the United Kingdom would consider assisting the United States’ military efforts to aid Saudi Arabia’s defenses should they ask for it. While Tehran still claims that the attack was not committed by Iran as of Sept. 23, Johnson is expected to speak with Iranian President Hassan Rouhani at the U.N. this week to talk about peace and future cooperation in the Gulf.

In the meantime, the attack caused oil prices to fluctuate more than they have in recent history. As Saudi Arabia recovers from the attack and mends the largest crude oil processing plant on the planet, we can expect to see fluctuations in the coming weeks.

Louann holds a Bachelor’s degree in English and Creative Writing. She currently writes for a variety of industries and can’t resist a good story when she comes across one.