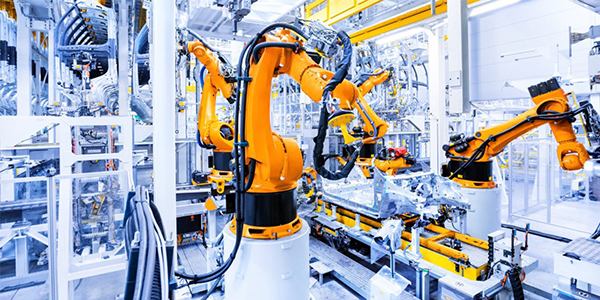 Industrial robots are not new. Neither is the precise quality-driven management plan known as Six Sigma. But in the cover article in this issue of U. S. Industry Today, Richard Schneider, CEO of FANUC Robotics of America Inc., argues that by combining these two technology advances, a new and powerful management tool can be created that will literally “Save Your Factory.”

For Schneider the end result of combining robotics with Six Sigma could very well be the answer to American manufacturing’s dilemma as we compare rising labor costs at home against the risks and rewards of moving plant and equipment overseas. The question isn’t China versus the United States, after all. The task facing U.S. industry is how to greatly improve productivity (and profits) while staying home in the richest economic market in the world.

It helps to recall that automation and robotics were considered pretty controversial not so long ago. In his 1960 campaign for the White House, John F. Kennedy railed against automation as a threat to the American factory worker and used much the same rhetoric that protectionists now use to argue against the global market place.

In calling for a concerted “Save Your Factory” campaign, Schneider argues that American manufacturers can be just as cost competitive with low-wage competitors such as China and other East Asian industrial economies. He cites the example of a manufacturer of welding products who found his man-made process produced items that cost 84 cents per part; moving to China would have cut that cost to 30 cents per part. Investing in robotic welding and staying home in America also cost 30 cents per part. Which would you choose?

The Six Sigma precepts are a more recent development and need to be fully understood before their connection to the use of robotics becomes as compelling as it should. This business tool was first devised by Motorola and was quickly followed in the late 1990s by world-class manufacturers such as General Electric and Allied Signal. GE alone has estimated the benefits of its application of Six Sigma principles amounted to $10 billion in cost savings during the first five years of its application. In statistics the Greek letter Sigma is used to represent standard deviations from the mean. The way Motorola and other manufacturers apply it, Six Sigma means a process – any process – must not produce more than 3.4 defects per million opportunities. A Six Sigma defect is anything outside of the customer’s specifications: milling widths, tolerances, delivery dates.

What this does is give management a tool by which to measure any process, from starting design to final delivery, and to ensure that the same process is repeated without fail each time. Six Sigma can be applied to any field or process in manufacturing but also in services, medical and insurance procedures, or even call centers.

But it is in manufacturing that Six Sigma is best optimized through the use of robotics. Not only can one robot perform the work of three to five people; the skillful use of robotics, when matched against the careful measurement of process, means vastly enhanced process control and significantly reduced lead times. That, in turn, means reduced human error, fewer handling accidents and an optimized equipment plan and better floor space use.

Schneider’s conclusion, and ours, is that a concerted drive among American manufacturing executives to combine the increased use of robotics and the application of Six Sigma principles should be made under the banner of “Save Your Factory.” Many in our manufacturing community do not need to run the risk of overseas investment conditions – shaky legal systems, uncertain financing, raw workforces – in their quest for productivity gains and competitiveness in the global market. Those gains are at hand and you can literally “Save Your Factory” and the American jobs that go with them.