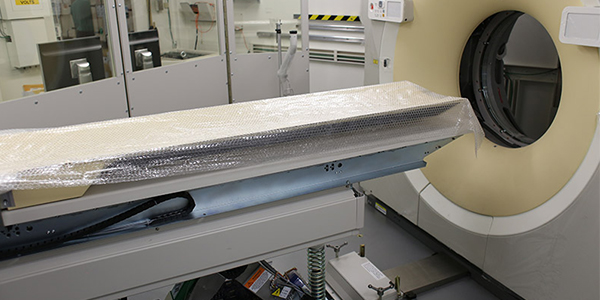 Astro Model Development Corp. lends its expertise to a number of markets as a full-service custom manufacturer but it is in the medical field in which it has recently seen its most significant gains.

Situated near Cleveland, Ohio, an area that has become the destination of numerous medical device manufacturers, Astro Model offers an array of comprehensive manufacturing services not only for the medical field but also for aerospace, automotive and other industrial and technology related applications.

The company was founded in 1977 by Mike Watts Sr. and three partners who formulated an aggressive growth strategy that enabled it to quickly expand its capabilities that today include CNC and manual machining, sheet metal fabricating, plastics, rapid prototyping, stereo-lithography and selective laser sintering painting, product development, engineering design, assembly and numerous other vital manufacturing services; these state-of-the-art capabilities are all contained in a 142,000-square-foot facility in Eastlake, Ohio. Mike Watts Jr. now serves as president of the company.

Reports Vice President of Business Development Rich Peterson, every advance made by the ISO-9000-certified company was done because of customer demand. “We got into plastics in the late 1980s because there was a need to perform vacuum and thermoforming. This led to the establishment of AMD Plastics, our plastics division. The addition of sheet metal capabilities occurred for the same reason, and led to the establishment of AMD Fabricating. Medical implants came about around 1999 as a result of demand from one customer, which later became a J&J division.” The company additionally founded Astro Technical Services in Warren Ohio, to service Delphi, the giant tier-one automotive supplier.

Medical marvels
Cleveland traditionally has been a nuts and bolts manufacturing area but recently has placed more of an effort on attracting start up medical companies, Peterson explains. One of these is Philips Medical Systems, which has become Astro’s largest customer. The company awarded Astro Model large multi-year contracts for the production of patient support couches and collimator assemblies for its CT scanner production line. Under this agreement, Philips Medical has totally outsourced production of these key system components to Astro. Astro fabricates, manufactures and/or procures all parts and material and performs final assembly and test operations, delivering these components to Philips on a kanban scheduling system. Astro manages all in process inventories as well as all supplier sourcing. The arrangement provides cost advantages to Philips Medical that helps the company remain competitive in today’s medical marketplace and allows Philips to better concentrate efforts on core business competencies.

In addition, the company’s Astro Medical Devices division has a dedicated manufacturing facility for the production of orthopedic implantables used in neck and spine surgery and has further produced components for use in the development of artificial human hearts. The company has manufactured devices for industry leaders such as Johnson & Johnson and others.

For start-up company Simbionix, Astro manufactures a surgical simulator-training device for use on a computer-based system. “We produce the entire unit,” Peterson says. “It’s a complete training center for cardiologists.” Astro is also involved in a similar system for urologists and Peterson claims that Israeli-based Simbionix offers an entire family of simulators that will, at some point, be produced locally.

By transferring production work previously done in Israel to Astro Model, Simbionix is able to improve and modify its products in real time to suit customer specifications. Under a multi-year manufacturing agreement, Astro Model manufactures and procures all components and assembles and tests the line of surgical simulators designed by this customer for training physicians on how to perform various minimally invasive diagnostic and surgical procedures. After a period of working very closely with Simbionix engineering, manufacturing and quality personnel, Astro Model has now begun full production and on-going delivery of Simbionix products.

The company also supplies a key component for another company’s cancer treatment machine – “it’s a biomechanical component hardware for a machine that detects skin cancer” and also makes components for sterilization equipment manufactured by Steris Corporation in Cleveland, a billion dollar medical supplier.

“We think medical manufacturing is where we need to be because it’s where the region is going,” he adds. “Right now over 50 percent of what we do is medical related.”

Altogether, Astro’s five divisions took in nearly $50 million in sales this year, $32 million of which came from the main plant and involved medical components. “Our sales have doubled since 2002,” Peterson says. “After 9/11 business slowed but now we’re growing at a healthy rate – we’ve dramatically increased our growth since 2002.”

Other industries served
In addition to its lucrative medical manufacturing business, Astro Model performs work for an array of other industries.

ADF, a NASA contractor, initially approached Astro Model with drawings for a special flight hardware optics plate to eventually be installed in the International Space Station (ISS) for combustion experiments in outer space. The challenge for ADF (now known as Zin Technology), was to find a company capable of creating such an intricate part and to do so at a reasonable cost. Astro Model was the only supplier approached that could offer suggestions that could lead to significant cost reduction.

By using rapid prototyping, Astro Model created a one-quarter-scale model of the optics plate at its own cost as an aid in developing a cost quotation. According to an article documented in Job Shop Technology: “By placing the SLA model on the table in front of the customer’s engineers, suggestions for design changes leading to more efficient manufacturing were able to reduce the estimated manufacturing cost by 18 percent. This discussion, along with customer confidence in Astro Model’s technical and manufacturing capability, lead to the project being awarded to Astro. Months later, after a very intricate manufacturing and quality assurance process, Astro was able to deliver a ‘perfect’ part that fully satisfied the customer and saved them substantial cost.”

In other areas, Astro employs its Astro Technical Services business dedicated to the production of specialized tooling and equipment used by the automobile industry. This includes the production of specialized-automation and test systems used in the manufacturing of vehicle components. Astro has seen some growth take place in its telecomm business in the last several years and recently prototyped and performed full production runs of sheet metal rack systems, copper coils, cabinets and switching mechanisms for large telecomm corporations.