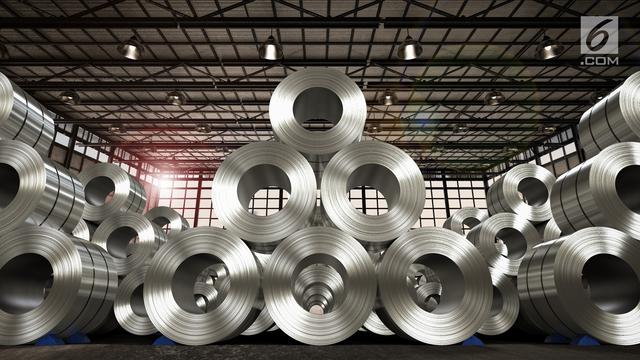 Wall Street Journal manufacturing reporter Bob Tita, who knows his stuff, more than earned his paycheck with a new story on how all the coronavirus-related disruption to the global economy is worsening a chronic global glut of key metals – especially steel – that’s likely to keep ballooning thanks to continued over-production from glutter-in-chief China.

Especially alarming seems to be this Tita finding: As the PRC’s economy and manufacturing sector have slowed markedly due to the outbreak, and reduced demand for metals, “many of the country’s steel mills and aluminum smelters have continued to operate because stopping and starting equipment handling molten metal is expensive and risky. Millions of tons of steel and aluminum produced during what is now the worst manufacturing slump on record in China have created a surplus of metal that will take months to shrink, even if the epidemic is contained and demand recovers later this year in China and beyond.

“As a result, the global stockpile of steel and aluminum threatens to push down prices and put new pressure on producers in the U.S., Western Europe and elsewhere. Many of those companies were already struggling to earn a profit on steel and aluminum because of lower prices and weakening demand from manufacturers.”

Indeed, he quotes a U.S. scrap steel broker as fearing that “We could see China swamp the entire world with steel.”

Yet Tita – and the broker – seem to be missing something crucial about the steel glut’s recent past, present, and likely future: The situation then, now, and going forward would’ve been much worse if not for the global nature of President Trump’s steel tariffs. And the latest global output data from the World Steel Association have just proven this point yet again.

When first imposed, in March, 2018, the levies were blasted as catastrophic mistakes by globalist and free trade conventional wisdom-mongers in politics, the Mainstream Media, big metals-using industries, and their hired guns in the think tank world. Yes, they acknowledged, China has been guilty of dumping its bloated steel (and aluminum) output overseas at artificially low prices, thereby exporting not only metals but a metals recession and unemployment around the world. But the United States was an exception, because of steel tariffs already imposed under the Obama administration.

The new U.S. duties were hitting America’s trade partners indiscriminately, including supposedly loyal allies in Europe and East Asia (along with Mexico and Canada). What could be dumber or more short-sighted – especially since these countries had joined with the United States to start putting multilateral pressure on China to cease and desist?

But as RealityChek regulars know, none of these complaints held even a drop of water. For the rest of the world was likely to continue responding to the metals flood from China the way it always had – by ramping up their own exports to the United States, and/or putting the Chinese metals inundating their own markets into new boxes with their own labels and sending them state-side – a practice known as transshipping (and involves committing customs fraud).

Moreover, after achieving exactly nothing since it was created in September, 2016, the multilateral steel talks seem doomed because China has decided it’s had it even with pretending to be interested in cutting its capacity meaningfully.

Yet thanks to the global scope of the Trump tariffs, the U.S. economy is no longer serving as the world’s steel buyer of last resort – and manufacturing punching bag. I first documented their effectiveness in this May, 2019 op-ed. And I’m pleased to report that as of January, 2020, the World Steel Association’s figures show that they’re still working exactly as intended.

The Association tracks output for 64 countries that comprise the vast bulk of global production. And its new figures show that on a January-January basis, China’s steel production rose in tonnage terms by 7.2 percent. That’s considerably faster than world production growth of 2.1 percent.

But the American industry expanded output by more than the global industry, too – by 2.5 percent. And much of this relative improvement stemmed from the poor production performances of other regions and countries that traditionally viewed the United States as the world’s big steel dumping ground. For example, during this year-long stretch, steel tonnage production in Japan rose by only 1.3 percent. For South Korea and Taiwan, it actually fell – by eight percent and 14.6 percent, respectively. And overall European Union production sank by twelve percent.

This success contrasts sharply with the pre-tariffs situation, when the United States was clearly the world’s biggest steel production loser as the result of gluts not only in China but created by many other economies.

At the same time, the battle to safeguard American domestic metals producers hasn’t been won once and for all. As Tita notes, although “Tariffs have made many types of metal made in China uncompetitive in the U.S.,” China’s still “large steel-and-aluminum output drives up supply and weighs on prices around the world. Excess metal in China could create more competition for U.S. steel exports or enter the U.S. indirectly as imports from Canada and Mexico” – where the American levies have been lifted in connection with the signing of the new U.S.-Mexico-Canada trade agreement (USMCA), the follow-on to the North American Free Trade agreement (NAFTA).

But the new U.S. and global production numbers also show indisputably that Mr. Trump was right and his critics wrong about his sweeping approach to the metals tariffs. Just don’t expect any of the critics to admit it.