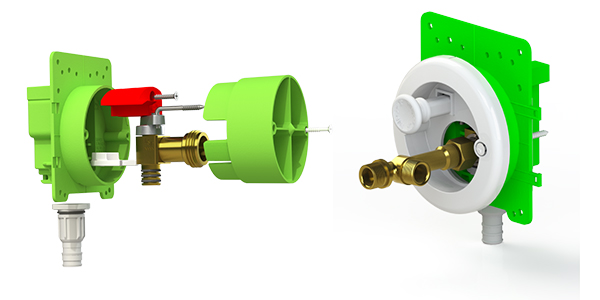 The LSP Products Group has a long history of innovation, starting with its founder’s invention of a better way to install valves for washing machines, more than three decades ago. William Bunch tells how this Nevada-based company is moving forward aggressively in the 21st century, with new products, a new facility in China, and a push for brand new markets as well.The LSP Products Group may be a company that manufactures plumbing products used with rigid pipe, but what it’s really known for is flexibility.

The now-Nevada based company, founded on the basis of a major innovation in the way that washing machines are connected to the residential plumbing system, is now developing ways to make critical products in China and adjust to changes in an industry moving from traditional copper pipe to PEX tubing. Officials said an aggressive new management team at LSP Products has helped the roughly 35-year-old company not only adjust to a changing market, but to grow significantly faster than the rate of new construction.

“We have taken a company that wasn’t very aggressive or exciting for many years, through the 1990s, and put it on a trajectory of greater growth and we’re all very excited,” said Rick Mejia, the General Manager of LSP Products. “It shows in the resulting sales and growth figures as well as in our product innovation.”

Mejia estimated that LSP Products, after that relatively slow era, is now posting annual growth figures in the double digits, with a similarly upbeat outlook for the immediate future. Company officials believe that the residential housing construction market, which has always been the backbone of the business, will remain strong despite some predictions of a coming slump.

America’s housing boom
“If you look at housing starts in the United States since the end of World War II, they have never gone below one million and rarely exceeded two million, averaging 1.5 million starts per year,” said Mejia. “So when people talk about a bust, the reality is that it’s pretty steady. We’ve certainly been riding the high end of the cycle, but the reality is that as things slow down, we will still be able to grow rapidly by gaining market share.
The company was originally founded in California in the early 1970s, when the Golden State was experiencing a boom in housing. Duane Logsdon was a plumber working in the growing Sunbelt region when he came up with an idea for a better way to install valves for washing machines in new homes.

Washing machines have always required two supply lines and a drain, and typically these were exposed and built into the walls of new construction. But Logsdon invented a box that could be recessed into the wall, which not only was more aesthetically pleasing but also saved builders a considerable amount of time. The washing machine outlet box is still a mainstay of the company.

Originally based in Stanton, Calif., LSP Products quickly grew to become a dominant supplier of plumbing connections in the West Coast region. By 1978, Logsdon had sold his interest in the firm to NCH, a private company based in Dallas.

During the 1990s, LSP Products went on an acquisition spree that was aimed at filling some of the gaps in the company’s residential product lines. The firm bought Rapid-Fit in 1990, Aqua-Flo in 1993, and Tech Specialties in 1995. Mejia explained that the goal of these purchases was that LSP Products wanted products in all three stages of residential plumbing construction: “ground work” – when pipe is set in a concrete foundation; “rough in” – the basic plumbing before drywall and “trim out” – the final plumbing work that takes place after the drywall is in place.

Expanding its range
Rapid-Fit has become a leading name in bathtub drain assemblies and repair kits, while the Aqua-Flo flexible stainless steel connectors available in faucet, toilet and waterheater configurations, and the E-Z Turn Quarter-Turn Ball Valves have defined the state of the industry in recent years.

“These acquisitions allowed us to expand into other areas of plumbing,” Mejia said. “It allowed us to become a more complete company that could offer more products to more plumbers.” Today, the bulk of what LSP Products sells goes to large wholesale distributors and the major national chains, although about a third is supplied directly to original equipment manufacturers, which are sold as part of their final product offerings.

Mejia said that in recent years LSP Products has become much more aggressive in finding uses for its piping and connections, especially in manufactured products outside of the construction sector. He cited a leading manufacturer of espresso machines, which asked LSP Products to modify one of its stainless steel connectors for its devices.

“Working with these manufacturing companies allows us to play outside the plumbing industry,” he explained. “A lot of times people come to us and say. ‘I know you make this product, but can you make some thing that’s like it,’ and nine times out of 10 the answer is ‘yes.’ So now a lot of our work is customized.”

During the company’s growth spurt in the 1990s, LSP joined the corporate exodus out of California and settled in nearby Carson City, Nev. The vast majority of LSP Products’ 220 employees – about 160 or so – work at the firm’s 80,000-square-foot facility in Carson City, while most of the rest are based in a smaller, 17,000-square-foot plant on Hainan Island in the South China Sea.

Mejia said that the China facility is technically an independent facility, but LSP Products is its only customer. Mejia explained that company officials carefully evaluate its different products lines, and conduct a thorough economic assessment to determine what products can be made competitively in the U.S. and what needs to be manufactured overseas.

Adjusting to PEX
The other big change in the world of residential plumbing in recent years has been the rise of crosslinked polyethylene, better known as PEX, a type of flexible pipe that provides labor savings to the plumbing contractor. The increasing use of PEX, replacing traditional copper pipe, has posed an interesting challenge for LSP Products, and has also provided a great opportunity.

“We’ve done a better job than some of our competitors in staying ahead of the curve,” Mejia explained. LSP Products has studied the different ways that PEX plumbing needs to connect to new or traditional systems, and it has been busy developing new types of products to accomplish that.

The other challenge that LSP Products has faced has been consolidation within the industry supply chain, which has meant that the company has needed to respond to increasing competitive pressure. Mejia said the firm is countering this pressure, both through its manufacturing initiative in China, as well as an aggressive push to expand opportunities in the fast-growing Southeastern U.S.

For LSP Products, the most exciting years are still in the pipeline.