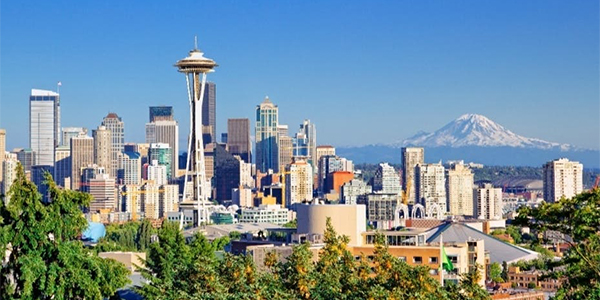 Its ingenuity might be considered a microcosm of the state’s character: Boeing Aircraft Company had seen its ups and downs since its inception but as the 1970s began, a number of factors came together to push Boeing into a crisis: The Apollo project had wound down, the aviation industry was in recession and other hopeful programs went by the wayside. In Seattle, the Boeing workforce was cut from 80,400 to 37,200 between early 1970 and October 1971. Things were so bad that a billboard on the city’s outskirts read, “Will the last person leaving Seattle turn out the lights.”

But few understood that this was a company called Boeing, located in Seattle, in the state of Washington, the cradle of innovation. To attract new business, Boeing expanded its territory beyond aviation. Boeing Computer Services sold commercial computer products. Boeing employees irrigated an eastern Oregon desert, managed housing projects for the Federal Department of Housing and Urban Development, built a desalinization plant that converted seawater to fresh water for a resort in the Virgin Islands and built voice scramblers for police departments. They produced light-rail vehicles for Boston and San Francisco, introduced personal rapid transit in Morgantown, W. Va., and built three gigantic wind turbines in the Columbia River gorge.

By 1983, the recession began to ease off and as the decade passed, Boeing commercial airliners and their military versions became the mainstays of civilian airlines and defense systems.

The moral: Necessity is both the mother of invention and innovation.

“Culturally, the entire history of the state has revolved around innovation,” says Dick Larman, director for business project development within the Department of Community Trade and Economic Development, citing the development of Boeing, once a part of the same company as United Airlines and its role as a mail carrier between New York and San Francisco. Innovations around aviation gave rise to many spinoff technologies and companies, and have helped to spawn other avenues of growth.

Consider how many cultural drivers call Washington home: Boeing, Microsoft, Immunex/AMGEN, Costco, Amazon.com, Nordstrom, Starbucks, Nintendo America and Weyerhaeuser. There are, indeed, many more breakthrough companies yet to be born and any business that wants to get in on the ground floor of the “next big thing” should consider Washington as its base of operations.

Creative energy
“When you look at the whole idea of innovation and creativity, we have been number one for years in startups for a lot of reasons,” Larman says. “A lot of business people spun their companies off of others like Boeing and Microsoft. Here, startup success is higher than failure. As far as technology industry employment we are number one nationally in technology and as that business sector picks up again, a lot of companies that are still standing (after the bubble burst) have begun to grow.”

Washington also ranks 5th for venture capital investment, 10th for small business financing and 10th in the number of PhDs and engineers. In addition, according to the 2002 State New Economy Index compiled by the Progressive Policy Institute, Washington ranks number one in “economic dynamism,” a hallmark of the new economy.

True to this designation, Washington is again on the frontier with Gov. Christine Gregoire leading a push to grow the life sciences, including biotech and biomedical research with $350 million put toward this initiative.

The state is also heavily engaged in biofuels and biomass activity – “by 2006 we’ll have a biodiesel refinery operation in state made from Canola – it goes back to our culture,” Larman says. “Tell somebody that something might be needed in the future and we’ll do it.”
One thing that has made a remarkable impact on the state’s economy has been the ability to generate cheap energy. “In order to make aluminum for airplanes to win World War II contracts they built damns on the river that enabled cheap energy,” Larman says, adding that a kilowatt hour in the state costs on average an astounding rate of 3.2 cents. “We have an energy hub that is fast-growing because of hydropower. We’re also high up nationally for the number of windmills.”

Larman explains that business hubs in Washington are not geographically concentrated and spread out among the 39 counties, most of which have seen growth on average of 3 percent a year. The ports of Seattle and Vancouver are major centers on the West Coast, with Seattle positioned as the number one container mover in the country, seeing 5 percent of containers in the nation move through each year, reflecting a $12 billion industry, and perhaps even closer to $14 billion at this point, Larman says.

Indeed, Steelscape, producer of cold rolled, metallic coated and painted steel coils sited its facility on the Columbia River in Kalama for the ability to easily bring raw materials into the plant – it was pivotal in the decision, says Marketing Manager Renee Baker. “The proximity to our customers on the West Coast was also key,” she adds.

The workforce, she stresses, has further been a boon to the company’s success. “Our workforce is one of the things we highlight the most,” she says. “We operate under an empowered workforce – it is stellar at making things happen.”

Bill Bushbaum, general manager of Amtech, agrees that the logistical convenience of the ports was a big factor in Amtech’s location in the Yakima Valley. The company manufactures fiberglass and vacuum-formed products and as a custom molder offers a number of its own proprietary products. “We can ship and be into the Far East faster here,” he stresses, adding that the availability of affordable energy coupled with the quality of the workforce have also been factors in the company’s success.

Welcome to wine country
In addition to an agricultural base that has put Washington at the fore of fruit production, especially apples and cherries, the state is seeing huge growth in the wine industry, placing it number two for wine production. “In the last two years we have won more gold medals than California” with over 300 wineries and 30,000 acres of vineyards growing at a rate of 100 acres a month. In 1984, the region was federally recognized as a unique American Viticultural Area (AVA).

“Someone discovered that this is very much like some regions in France with great soils, so why not grow grapes here?” Larman comments. That vision precipitated a $2.4 billion industry in the state.

Indeed, with the combination of the Columbia River and several tributaries, the right climate and soils, Washington has become so popular that in the Walla Walla Valley alone, there are nearly 1,500 acres planted in vineyards, while the number of bonded wineries in the area has grown from eight to 70 in only 10 years. Because of this, the Walla Walla Institute for Enology and Viticulture was established to facilitate alliances with vintners and viticulturists in the Walla Walla Valley and throughout Washington State; to promote economic development of the wine industry, and provide education and training for those with an interest in the industry.  “People come here from all over the world,” Larman says.
And even those who live within wine growing country appreciate its affect in the region. “From our plant we’re within 30 minutes to at least 40 different wineries in the Yakima Valley,” says Amtech’s Bushbaum, who says that he maintains 21 acres on his own on which he grows his own grapes. “This is such a great area for produce.”

A great area for produce and a great area in which to be productive – two main themes that have enabled Washington to market itself as a cultural innovator and to lead the way into a new century.