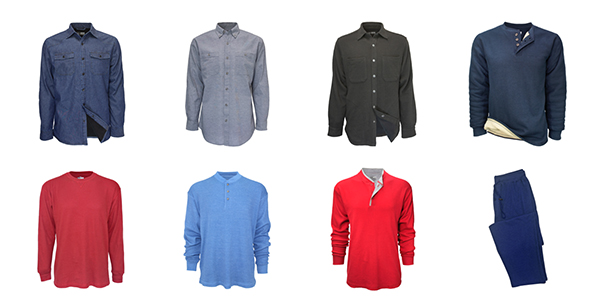 It all started with pants. Specifically, pants that California Manufacturing produced for the military under a 1943 government contract. But, even before that contract ended, the company began producing men’s outerwear for the consumer market. Founder Lester J. Handelman saw the need for moderately priced jackets, parkas and coats – and filled it.
A lot more than fashion changed in the garment industry over the next 60 years. Most of the apparel manufacturers that operated in the 1940s are no longer in business. Many remaining companies have been absorbed by conglomerates. And most clothing businesses do all their manufacturing offshore.

Not so with California Manufacturing. The family-owned business is still privately held. The founder’s son, Neil Handelman, is president. Two more sons, Gary and Howard, are executive vice president and secretary/treasurer, respectively. And the third generation is already involved, with Rob Rosenblum as sales manager and vice president of product development, and Ellen Brin as chief financial officer.

Named after its original manufacturing location in California, Mo., the enterprise is headquartered in St. Louis, Mo. The 120,000-square-foot California facility has been converted into a warehouse and distribution center. For the past 20 years, outerwear has been produced at a pair of 100,000-square-foot plants in Mississippi – one in Pelehatchie, one in Macon. The business employs 400 people, 250 of them in manufacturing.

Sizing up Markets
According to Neil Handelman, California Manufacturing has adapted to changing times by identifying new markets, products and processes.
“This is an aggressive company that is expanding its product line to cover more segments of the industry. We’re adding new products and new ideas to our line. California Manufacturing is also one of the few clothing companies left that is manufacturing in the United States. We’ve fought hard to stay here.”

California Manufacturing’s operations are divided among three divisions:
• Retail: Markets outerwear to national and regional retail chains. The retail division also sells the company’s new sportswear line, which was introduced in spring 2002.
• Ad specialty: Offers custom embroidery such as logos and names on outerwear items that customers distribute as promotional items and incentives. Started in 1990, the division also has the license for Munsingwear products. Embroidery work is done at the California, Mo., facility.
• Uniform: Manufactures for
uniform suppliers that fill large orders for businesses such as airlines and beverage companies. This division also works closely with the designer to develop custom products.

Handelman describes the retail part of the business as reflecting both consumer demand and retailer issues. “Certainly value is very important to consumers. They want a current style at a moderate price. We see what’s selling in high-end stores and translate the look into an affordable price. Then we offer our retail clients volume and good value.”

When discussing the recently introduced line of sportswear, Handelman talks about its evolution. “We recognized that there is limited growth potential in outerwear. It’s seasonal and dependent on the weather, and as soon as retailers have any overstock, they mark it down. We knew that to grow we needed to go into another product line. So we decided to hire people who are experts in merchandising to advise us.”

Commenting on the results of that decision, he says, “The sportswear line is completely new – launched for spring 2002. This is our first year and our second season in sports. So far it’s been very good.”

California Manufacturing already rolled out the fall 2002 sportswear line and is preparing to unveil its spring 2003 collection.

Operations Tailored to the Times
Handelman talks about California Manufacturing’s production operations first in terms of the people who work in the company and then the facilities.

“With our employees, we’ve had two and three generations working here at the same time. Our plants are mainly in small towns, so it’s not unusual for family members to work together. Some people spend their whole careers working here.”

He notes that the factories are unionized under the Union of Needletrades, Industry and Textile Employees (UNITE!) and that California Manufacturing has a good relationship with that entity. “They [the unions] are in as difficult a spot as manufacturers. We both go out of our way to be co-operative. They have a constituency to represent, and we know that.”

Handelman says California Manufacturing’s three facilities are engineered to produce and ship both large and small orders efficiently. Plant modernization has cut costs 15 to 20 percent; the shipping cost on some items is just 7 cents each when they are packaged in cases, he explains Handelman also discussed California Manufacturing’s decision to move some production, including the new sportswear line, out of the country to cut costs. “We manufactured exclusively in the United States for as long as we could,” Handelman says. “First we moved 40 to 45 percent offshore, and now it’s 55 to 60 percent. But this is in an industry that is 85 to 90 percent offshore.”

He emphasizes, however, the company’s commitment to the U.S. operation. “We will manufacture in the United States as long as we can. We have certain customers who want domestically produced products – and we are domestic and union as well. We can also do quick turns on our inventory and embroidery here.”

As to future trends, Handelman says, “We project a 25 percent growth in volume. And I think that five years down the road the sportswear business will be bigger than the outerwear line. And we’ll add new lines such as jeans, slacks, leather and other apparel.”

California Manufacturing appears to be on its way to another well-planned, seamless transition.