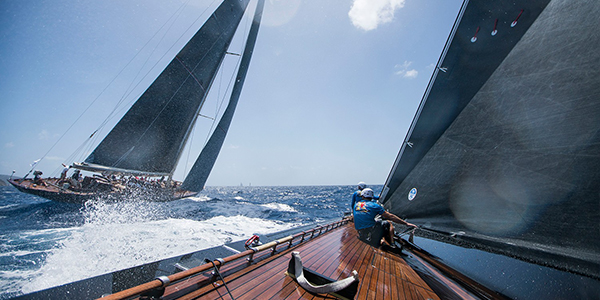 n the late 1970s, famed pop composer Peter Allen penned the song, “I Could Have Been a Sailor,” in which a housewife belabors her often mundane existence wishing she had tripped through life with a bit more bravado, perhaps spending more time singing, dancing, or better yet – sailing. After talking to the folks at North Marine Group, anyone would wish they had spent more time sailing.

If the open waterways are your ultimate destination, North Marine Group is a company of dreams. “North Marine was born out of a vision that we should try to provide everything on a sailboat above the deck,” says president Thomas Whidden, whose love of sailing was inspired by his father.

Today, the vision has become a reality. North Marine Group is almost 50 years old and stands as a family of companies dedicated to advancing water sports through innovation and superior technology. The group includes North Sails, a world leader in sail making through an ongoing commitment to making sails faster, lighter and longer lasting. And there is Edgewater, a quality line of unsinkable high-performance outboard sportboats built for a smooth, controlled ride in virtually any condition. Southern Spars is also part of the mix and a world leader in light, strong and durable carbon fiber spars, and marine components. North Graphics Custom Graphics provides applications for virtually any sailing surface, including sails and hulls. Cruising Direct, built and serviced by North Sails, offers quality, less expensive cruising sails for boats 35 feet and under. And finally, North Sails Sportswear is European-inspired gear for the fashion-minded sailor.

Sailor’s Sanctuary
North Marine Group currently holds fast on 40 percent of the $250 million sail-making market and dominates the club racing market in the 22-40-foot range with 75 percent market share. It has locations in roughly 70 different places throughout the world and while it offers riggings, sportboats, spars, graphics, sportswear, DVDs and more, it’s the sails that have put North Marine on the nautical map. “Almost all of our sails are custom built. Each design is engineered with a purpose in mind. We fit boats from eight feet long to 200 feet long. Generally, each sail we design has a specific purpose in mind. A customer can have a sail made and choose its fullness, camber, color, and material,” says Whidden.

North Sails’ market segments are diverse. “We cater to the very young sailor who might own a Sunfish or Bluejay. The next market up would be the club racer who takes his boat out racing at the local yacht club. It might be a 22- to 30-foot boat,” says Whidden. The 40-foot and beyond range is where the game changes. “These boats can be used to cruise or race. A hundred feet and above and you’ll find some of the most beautiful boats out there, some are staffed with 20 crewmembers. But whoever the sailor is, we’ve got what they need,” assures Whidden.

North Sails is so serious about sails it employs a specially designated Performance Resource Group (PRG). “The PRG is about 10 employees around the world whose sole job description is to continue to develop new and different ways to make sails,” says Whidden. “Our greatest gains have been made in how to develop the best materials for a particular sail and matching the right material for the proper usage of the sail.”

The 3DL Difference
In 1992, North Sails introduced 3DL(tm), a revolutionary sailmaking technology that thermo-molds sails as a unitary membrane on a full-sized three-dimensional mold. Compared to a traditional sail assembled from panels of flat sailcloth, a 3DL sail stretches less for its weight, holds its shape over a wider wind range and retains its designed shape longer.

3DL technology eliminates the seams from a traditional paneled mainsail. It is a continuous membrane with load bearing fibers applied to the laminate in a pattern that precisely matches the loads in the sail. A traditional paneled sail is made from panels of woven fabric assembled into a whole. Under load, this can cause problems. “Seams tend to stretch or shift at different rates depending on where they are on the sail, wind velocity, and even thread tension of the sewing machine,” says Whidden.

“Subsequently, surface loads within the sail are distributed unevenly. Wherever loads tend to concentrate, the sail is prone to distortion. A 3DL sail has no seams, so loads are distributed without interruption from corner to corner. Because stresses are perfectly equalized throughout the entire membrane, the sail holds its designed “flying shape” with a minimum of distortion over a remarkably wide wind range.”

3DL sails also don’t use conventional material. Sailcloth, no matter how high tech, is made of yarns oriented in either a vertical or horizontal direction. However, loads in a sail are not always vertical or horizontal. No matter how carefully it is assembled, woven fabric is prone to bias (angular) distortion. During manufacturing of a 3DL sail, a computer-controlled gantry applies yarns to the laminate in a pattern that precisely matches the curved load paths in the sail. And because yarns are laminated over a mold, they also lie in the same three-dimensional matrix the sail will assume when sailing. This highly efficient application of materials is why a 3DL sail stretches less for its weight and adopts its designed flying shape (pressurizes) so quickly.

3DL sails also don’t have any wrinkles, don’t lose their shape or speed as they age and are typically 20 to 30 percent lighter than a paneled sail. And while they cost a bit more initially, they last longer. “We have many customers going into their third competitive season with their 3DL sails and they’re very pleased with the value,” says Whidden. “While no two boats are the same and sail handling is an important determining factor in a sail’s longevity, we have many documented cases where the competitive life of a 3DL sail is close to double that of an equivalent paneled sail.”

Ultimately, North Marine Group is about people and the love of sailing. “Racing is our passion. We race to help our clients win, but we also race to learn. And the more we learn about making faster and longer lasting sails, the more sail value we can deliver,” says Whidden. “It took four years and $12 million to develop 3DL. We’ve committed ourselves to technology and inventing equipment to give us a technological approach to manufacturing. It’s a leap of faith from an investment standpoint, but it’s extremely rewarding work.”