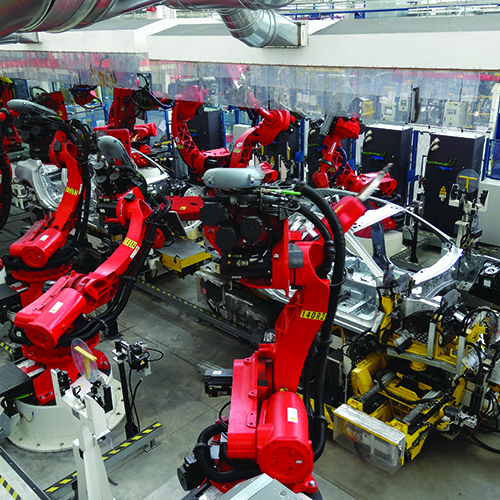 Mathias Wiklund, Chief Operating Officer of the company’s Robotics unit, sits down to talk about the success that has streamed from his company’s steadfast commitment to a dynamic, multinational presence, and expands upon Comau’s state-of-the-art robots, in particular, and their integral role in the future of global manufacturing. Steve Engelhardt reports.

As we stand in 2015, the discussion about robotics and their place within production facilities remains a largely contentious and ultimately misinformed one. Many, particularly in North America, view these programmable systems simply as “next generation hunks of metal designed to take the jobs of hardworking human beings.” But the reality of the matter is that the presence of robots inside factories and plants all around the world is not a recent phenomenon; in fact it was in 1937 when “Bill” Griffith Taylor designed and produced the first industrial robot, a crane-like device powered by a single electric motor.

Over time, the application and designs of these systems has improved and evolved greatly, and one of the companies that has been especially instrumental in such progression over the last 40 plus years is Comau. “The company began as a small consortium in Italy, and today consists of five different business units that together account for over $1.8 billion in revenues annually,” Wiklund says, adding, “and our Robotics business unit represents a significant piece of our overall success and identity as a company.”

Global Footprint
Comau defines what it means to be a global company, with manufacturing and corporate facilities across Europe, Asia, Latin America, and North America, and he says the company’s presence in nearly every major market and beyond is the result of a corporate strategy focused on “developing our footprint based on our customers’ needs and where they are.” And for Wiklund—who in addition to being born in Sweden, has lived and worked in Germany, Italy, China, Thailand, and the U.S.—it’s simply how you best understand different cultures and the business needs that arise out of them. “Only when you immerse yourself within different regions and cultures do you actually understand them, and that’s why Comau has committed itself to being as close to its customers as possible, in order to better understand where they are at now, and where they may be down the road.”

But who exactly are Comau’s customers? “Over the years, our robots have really become relied upon by those within the global automotive industry, given their long list of capabilities, from arc welding and cosmetic sealing, to plasma cutting, processing machining, and spot welding,” he says, adding, “But recently, as more people have become aware of our robots’ versatile nature, we’re seeing the use of them rapidly expanding into a number of other industries, including aerospace, energy, and consumer products like electronics.”

Another part of this success is due to their comprehensive range of offerings, with a wide assortment of models designed to handle small, medium, high, and heavy-duty payloads. “Our robots’ payloads range from 3 kilograms up to 650 kilograms, and maximum horizontal reaches from 630 millimeters up to 4,124 millimeters,” Wiklund says, continuing, “and when you combine this with their long list of capabilities, our robots can effectively handle just about any and all needs our customers may have.”

One of the newest additions to the product range is their recently released Racer3, a six-axis articulated robot with a 3kg payload and a reach of 630mm in length. Built from high-strength aluminum and magnesium, the newest paradigm in Comau Robotics weighs just 30kg and can be easily mounted on benches, walls, ceilings or on inclined supports. It’s also destined to be the fastest in its class according to preliminary prototype tests.

Outside the Box
Wiklund says that continuous improvements within their products like those seen in the Racer3 speak to Comau’s broader reputation for innovation. “One of the key focuses of our guiding philosophy here at Comau is to never be ‘trapped inside a box’, so to speak, with regards to how we go about developing new products,” Wiklund says.

And there’s been numerous examples over the years, where Comau has introduced a new technology and flipped the robotics industry on its head—sometimes quite literally. “I remember having a conversation a few years ago with my colleagues about potentially flipping our robots upside down within the customers’ manufacturing workplace, as a way of creating cleaner, additional floor space,” he says, adding, “Comau put the idea to the test and found that in many instances it was highly beneficial and actually improves the manufacturing process, flexibility and overall speed to market, and as a result many manufacturers have adapted to the using inverted robots in their manufacturing.”

Another breakthrough was made when Comau decided to integrate hollow wrist technology within many of their robots, a design in which all of the cables are placed inside the robots’ arms instead having them outside and exposed. “The use of hollow wrist technology is quite unique for us, and we have eleven different variants of base that it can be found in,” he says, adding, “The cabling is integrated inside the arm, and beyond limiting the risk of the cables’ wear and tear, the robots are easier to program, easier to simulate, improve production up-time and provide an overall greater level of manufacturing accessibility.”

Close to the Customer
Wiklund says the overarching goal in their pursuit of robotics innovation is to deliver a solutions-oriented product that is defined by its “ease of use” for their customers. “We work in-depth with our customers, continuing the partnership long after the initial sale, and from this we are able to keep a strong finger on the pulse of the market and develop solutions based on what their current and future needs are.”

Comau’s commitment to the customer is a critical piece of their success, and will continue to be integral towards their ability to bring more and more robotics to manufacturing, as the need for such rises. “Looking at North America, there are about 160 robots in use for every 10,000 individuals, which is less than half of what you see in some European and Asian countries like Germany and Japan,” he says, adding, “I think as we move forward, manufacturers in the U.S. will need to make the jump to robots sooner rather than later in order to maintain their competitiveness, and we’ll be ready to provide a custom, tailored solution for them when they do so.”

Fostering strong ties with their customers in a “local” manner despite their global footprint and delivering innovation tailored to real, existing needs in the marketplace, Comau and its robots serve as a key cog in the world’s industrial landscape. And their presence will only continue to grow, because as Wiklund puts it, “The world is becoming global, and companies will need to evolve faster in order to compete, and robots—and Comau by extension—have a central role in this scenario.”