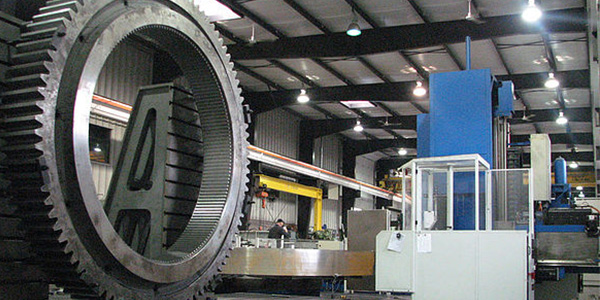 Havlik Gear boasts the largest gear cutting capacity in Canada – maybe even North America. It’s a division of Havlik International, which – as its name implies – has garnered a global reputation, with umbrella-d companies that all have withstood time’s harshest test: Are you fit to survive?

Indeed, they are. They’ve been involved in gear manufacturing for more than a century. Meanwhile, the entire enterprise still remains a family enterprise.

The Havlik Gear division is located in Cambridge, Ontario, Canada – and its president, John Havlik Jr. recalls how it was established: “The main company was started in the Czech Republic in 1886, and it continued there until there until 1948, when my grandfather chose to come to Canada, a move that he felt would secure a position in the North American market.”

That position was solidified in 2003, with the establishment of Havlik Gear. He describes the Havlik Gear division as a “custom-focused machine shop and a custom heavy gear manufacturer.” Currently, the division offers products and services related to open gearing and gear boxes. This means special gearing, replacement gearing, bevel and worm gearing, gear units, and gear grinding of all sizes.

Customers served include those in the cement, chemical, energy, metallurgical, mining, rubber, steel, and transportation industries. “In addition, some customers are in material processing, and we have ventured into the aerospace industry, though that’s not currently a big part of our business,” says Havlik.

The customer list includes big-name clients such as Caterpillar, Lafarge, PREP (Pacific Rim Engineered Products), and FFE Minerals, among others.

The company’s heritage is rich with family history and innovation. Roots date back to the late 19th century, with the blacksmithing trade, performed by Havlik’s great-great grandfather. Later, his greatgrandfather – Jan Havlik – experienced the proverbial “light bulb” over his head: Involved in printing production, he realized it would be more efficient and effective to manufacture the necessary gears for himself. That led to the creation of the parental enterprise Havlik International Machinery.

In 1921, Jan Havlik passed away. His son Jerry Havlik assumed the leadership of the business. His tenure witnessed turbulent times. In the post-World War II environment, Eastern Europe experienced upheaval related to stability of Communist leadership. In 1948, Jerry Havlik decided that the time was ripe to venture into new territory. This compelled him to take the company into Canada in 1951, where he worked in a machine shop which he eventually bought.

In subsequent years, the company grew and divided into three divisions (True Forge, Material Processing, and Havlik Enterprises). John Havlik Sr. would eventually start his own company, Gear Craft, located in Cambridge. That company soon became the largest gear manufacturer for industries in Canada. Later (in 1990), he sold the business to Santasalo-SEW Eurodrive, one of the world’s largest gearbox producers. After the sale, he remained with the company, but he eventually decided to start a new company: Havlik International Machinery, which focused on machine tools.

A major milestone came when Havlik developed a relationship with TOS Celakovice, a Czech Republic-based company that builds gear machines and lathes. The development enabled the Havlik enterprise to witness strong growth.

To sum up, the original focus for Havlik International Machinery was the purchase and sale of new and used industrial chip metal machinery. As John Havlik Jr. relates, after the company started to witness substantial growth, it moved into manufacturing medium- to large-sized gearing. Havlik International is the main name, and Havlik Gear is the gear cutting division within this family operated organization, he adds.

John Havlik Jr., a company veteran with more than 20 years’ experience, oversees daily operation of Havlik Gear. The division’s gear reducers (new and rebuilt) find applications in a variety of settings including the steel, mining, pulp and paper, and material processing industries. However, with its experience and know-how, it can design and produce gears for just about any industry.

Havlik Gear’s capabilities are many, but the main ones include the manufacture of customized gears such as spur, helical, case hardened and ground, worm gears, globoid worms and wheels, straight and spiral bevel gears, internal and external splines, sprockets, split and ring gears, and racks. Services include special design and gearbox rebuilds.

John Havlik Jr. describes what separates his family-based company from similar competitors: “It’s our European-based and North American-based know-how. We have a very knowledgeable staff.”

Currently, Havlik Gear has about 50 employees who work in the Canadian facilities.

The Havlik Gear president offers another differentiator. “We boast some highly specialized equipment,” says John Havlik Jr., indicating the company’s very large MAAG gear shapers, which are machine tools that cut the teeth of internal or external gears. In addition, the company deploys sizeable CNC, five-axis boring mills, as well as CNC turning lathes, and vertical turning machines. “We have the largest gear grinding equipment in North America,” he adds.

All is housed in two plants, both located in Cambridge and both ISO 2001:2008-registered, he reports. “These two facilities are high bay, large capacity buildings and very state of the art, where we have recently installed a 10-meters swing, horizontal/vertical machining center.”

Both facilities are relatively new. The first was built in 2002, the second in 2010. Also, Havlik in Cambridge boasts a 22-ton crane.

The Havlik Gear division’s success has been considerable, as indicated by market position and annual revenue. “We are in the top 10 of manufacturing machine shops. In 2002, we recorded sales of $5,000. In 2013, we are looking to finish the year at $15 million,” says John Havlik Jr.

Obviously, that’s cause for great optimism. John Havlik Jr. looks ahead to opportunities, as well as challenges. “In our industry, when you look at the world, the mining industry experiences growth in third-world countries. That’s accompanied by growth in the global oil and gas industry, and that drives business. We’re already exporting about 80 percent of our products outside of Canada,” he says. “As far as challenges, our biggest one is capital equipment. Large equipment is very expensive. It can be challenging to achieve the appropriate financing for such equipment, what with the fluctuation of the Canadian and US dollars.”

Still, Havlik Gear looks to get bigger – both in terms of organizational structure and the dimensions of equipment manufactured. “We’re increasing the envelope when it comes to the size of our line and the size range that we can produce. We are increasing our ability to service our customers with larger components. Meanwhile, we will continue investing in the latest technology, an effort that translates into the creation of the next generation of machine tools.”