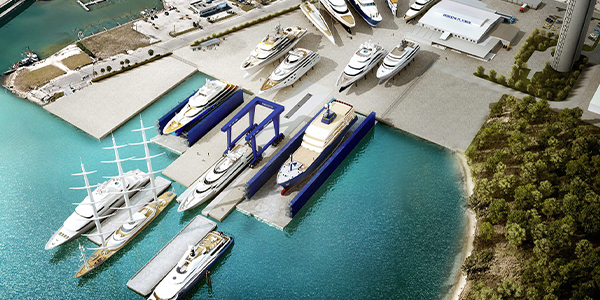 The lure of the ocean is as strong as it is mysterious. What generates the pull toward the sea? Perhaps it’s all of those negative ions that make people feel more alive. Maybe it’s simply an atavistic urge to return to the environment where all life began. Whatever the attraction, once people place themselves upon the water, Derecktor Shipyards helps them stay there.

For five decades, Derecktor Shipyards has been at the forefront as far as recreational and commercial shipbuilding and repair, servicing customers who demand the highest in quality and attention to detail.

Helen Gates, Derecktor’s director of marketing, indicates that many of her company’s customers first heard the sea siren’s sweet and seductive song during a cruise. “The cruise industry exposed many people to life on the water,” she says. “They became interested in buying yachts, simply because they’ve taken a cruise.”

For those thus affected, boat ownership follows a logical progression, Gates explains. “Once they’ve gone on a cruise, they charter a yacht,” she says. “Once they’ve chartered a yacht, they realize how much they enjoy the experience. Then they want to have their own boat built. Some then go on to something bigger.”

Derecktor satisfies that urge. Headquartered in Mamaroneck, N.Y., a boatbuilding and sailing center located on Long Island Sound, Derecktor has built some of the largest and most luxurious yachts that have been captained into the high wind or toward the setting sun. But the company’s business is not restricted to the high net-worth customers who can afford such a luxury. Derecktor also performs vessel repairs, and it has built specialized vessels, such as ocean racing boats that have competed in the America’s Cup event, as well as commercial crafts such as workboats and high-speed water taxis, ferries, patrol boats, and pilot boats.

Fifty Years at Sea
Derecktor builds and repairs more than 800 vessels each year. Its building projects have brought forth some of the best known luxury yachts, including the 114-foot MITseaAH launched in 1993. The company itself was launched in 1947, in Mamaroneck, by Robert E. Derecktor, who started with a small waterfront workshop and a dream to build the world’s best boats. At first focused on pleasure crafts, the business expanded into the construction and maintenance of all types of vessels including military and commercial crafts and racing yachts. Always a family-operated business, the company continues to flourish under the leadership of Paul Derecktor, the founder’s son, and it now includes three shipyards.

During its half-century voyage, the company developed a reputation for uncompromising dedication to detail, quality and outstanding workmanship. It boasts experience with all marine construction materials and yacht systems. Further, it has pioneered usage and custom fabrication of innovative materials for improved performance and extended reliability. Derecktor employs the most highly skilled craftsmen and skilled laborers who transform aluminum, steel, wood, fiberglass, titanium and high-tech composites into the world’s finest vessels. As a result, the company is considered the U.S. leader in aluminum boat production and a global leader in yacht and commercial construction, service, repair and refit.

Three Facilities
Derecktor’s three shipyards include the Mamaroneck facility, a three-acre site that serves as corporate headquarters and provides service and repair of all makes of vessels as well as custom metal fabrication, custom joinery work, composite work, paint/finish and rigging. In 1967, the company opened its Derecktor, Fla., site, which covers more than 17 acres of the Dania Cutoff Canal in South Florida. Today, it’s the region’s most complete marine repair facility, catering mainly to power and sailing yachts. It includes 40,000 square feet of out-of-water shed pace; 4,000 feet of docking space, and 45 slips (covered and uncovered) and 46 storage garages. Equipment includes a 600-ton elevator platform with rail, a transfer system, and 60-ton and 18-ton cranes.

The company’s newest facility, Derecktor Connecticut, was opened in 2001 in Bridgeport, Conn. The 23-acre site faces deep water with easy access from the Long Island Sound. Derecktor established the facility to focus on the new construction and servicing of ever larger vessels. It has the capacity to handle both commercial and pleasure craft with lengths exceeding 300 feet and weighing up to 600 metric tons. Its assembly hall measures 45,000 square feet, while its fabrication shop includes 56,000 square feet. “All new construction primarily takes place at Bridgeport, because that is our biggest facility,” informs Gates.

Building the Big Ships
Indeed, the site has enabled the company to move in a new direction. At the facility, the company has built its Derecktor 60 and Derecktor 80 vessels (60 and 80 meters long, respectively), which has placed Derecktor in the exclusive class of international builders that produce yachts larger than 50 meters.

In building these formidable crafts, Derecktor has teamed with Azure Naval Architects, an independent Dutch office of naval architects that provide design, engineering, construction supervision and support for new building or refitting of luxury motor yachts. “This, plus our established reputation for building high quality, luxury yachts is what differentiates us from our competitors,” comments Gates.

Both the 60 and 80 crafts possess powerful bow sections and sleek superstructure that enable maximum sea-keeping ability. In other words, these vessels can cover the long voyage. Their unique features afford safety, luxury, and reliability. The yachts incorporate a steel hull and aluminum superstructure. The combination supplies superior strength and, at the same time, saves weight and enables distinctive exterior styling. Further,
both have sufficient watertight bulkheads, protected anchoring compartments located on the tweendecks, isolated equipment and machinery rooms, long range due to vast fuel tankage and extensive space for stores. Their propulsion systems and ships powerplants are highly efficient, and their layouts allow for traffic flow for both the crew and the owner’s party.

As far as comforts, the 80 has a completely private owner’s suite that includes a private lounge and forward observation deck. The layout also affords passengers with a 360-degree view from the owner’s space. Even more, the passengers can enjoy an on-board cinema (one hopes the captain could provide a film library that would include “Mutiny on the Bounty,” “Down to the Sea in Ships,” “The Long Voyage Home,” “Jason and the Argonauts,” and “Moby Dick,” at the least), as well as two lounges, a grand dining room, a fully stocked galley and pantries, and a five-deck elevator. The Derecktor 60 boasts a huge private owner’s suite which includes a second state room and bath, as well as six large guest staterooms with private baths, and eight double staterooms for the crew.

New Ports of Call
Derecktor’s expanding facilities have enabled the company to embark on even more remarkable new endeavors. “Right now, at the Bridgeport site, we are in the process of constructing the world’s largest sailing catamaran,” say Gates. This task, which the company christened the Gemini project, involves the construction of a 145-foot catamaran yacht. The project began in 2005, and the vessel is expected to be launched in the autumn of 2007 and open to charter in 2008.

The Bridgeport site enabled Derecktor to take on another quite unique and ambitious project, involving waterfront development. “The Connecticut Department of Economic and Commercial Development approached us to build a 23-acre shipyard,” reports Gates. The opening of Derecktor’s Bridgeport facility underscores the company’s commitment to business expansion. Moreover, the new projects strongly position Derecktor as the shipyard-of-choice, and its locations on the Eastern Seaboard offer customers in the recreational and commercial sectors the convenience of a “proximity-to-build” location combined with innovative work of European designers. Derecktor brings an Ahab determination to its purpose.

So, shield your eyes with your hand as you look out at the horizon. That speck you see is a vessel named Derecktor Shipyards. It’s preparing to cross some straits, round the horn, and head out to uncharted seas, leaving the competition in its wake.