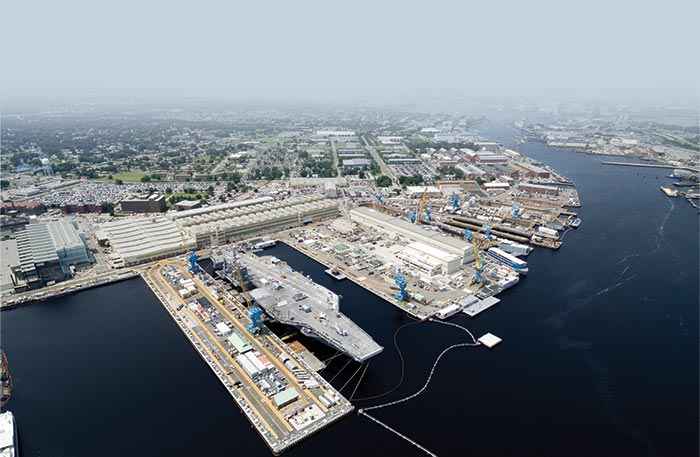 This year, Norfolk Naval Shipyard (NNSY) celebrated 250 years of service to the country with a commemorative ceremony held Nov. 1. Located in Portsmouth, Va., the shipyard serves as the U.S. Navy’s Naval Sea Systems (NAVSEA) Command’s chief East Coast repair, overhaul and modernization facility, one of the largest such shipyards in the world as well as one of four public shipyards dedicated to maintaining the strength and preparedness of America’s fleet.

How does the Norfolk Naval Shipyard intend to carry on with its rich historical tradition of innovation and service?

“Respect the past while building a vital future,” says Public Affairs Officer Terri Davis. “Our mission is to safely repair navy warships to technical standards, on-time and at-cost. Every day, we put innovative ideas to work to create new and more efficient ways to meet our mission and NAVSEA’s priority of returning ships to the fleet.”

In that sense, NNSY is like any manufacturer or service provider—striving to meet deadlines, reduce overhead costs and deliver high quality. The difference being, of course, that our national security and preparedness depend on it.

“The shipyard established the Rapid Prototype Center and Technology and Innovation Laboratory to source 21st century technologies to improve our efficiencies and competencies,” notes Michael Brayshaw, deputy public affairs officer. “The result is an impressive array of advanced capabilities, including additive manufacturing where we can use 3D printing to quickly create new tools. This past year we completed 15 major innovation projects. One example is a tie bolt anti-rotation tool used on a variety of naval vessel components. Another is a new molded case breaker assembly test stand that reduces potential shock hazards and reduces wasted laborhours to create a more efficient environment for electrical mechanics. Additional innovations include a cable winch guide that makes life raft testing and repair safe, and a more ergonomic sanitary clamp wrench that makes it easier and more comfortable to perform everyday cleaning and other special emphasis work.”

Brayshaw notes that the recent undocking of USS Rhode Island (SSBN 740) submarine during its 27-month maintenance and refurbishment was completed two days ahead of schedule. “Most people might think, what’s the big deal, that’s only a weekend,” he says. “But it actually set a record for Engineering Refueling Overhauls (EROs) on the east coast, beating NNSY’s previous record set nearly a decade ago with USS Alaska (SSBN 732).”

Another early completion date was accomplished with collaboration between Pearl Harbor Naval Shipyard and Intermediate Maintenance Facility (PHNYS & IMF) on a major valve and piping replacement project aboard USS San Francisco (SSN 711), that finished 13 days early this past August. This past January, San Francisco arrived at NNSY for conversion from an operational fast-attack submarine into a Moored Training Ship (MTS), the second of two next-generation MTS’s slated to train nuclear officers and Sailors at Nuclear Power Training Unit (NPTU) Charleston, South Carolina.

Also on the project list: Nimitz-class nuclear powered aircraft carrier USS Dwight D. Eisenhower (CVN 69), is at NNSY for a six-month long PIA (planned incremental availability). About 1,100 personnel are assigned to upgrade a variety of facilities, as well as improve mission readiness and ensure the vessel’s projected 50-year mission life.

Davis points out that as important as technology is, dedication of the combined military and civilian workforce is equally critical to fulfilling the shipyard’s mission. “We’re the fourth largest employer in Hampton Roads, which is the name for both the Peninsula and Southside of Southeastern Virginia which includes the seven major cities of Portsmouth, Norfolk, Virginia Beach, Chesapeake, Hampton, Newport News and Suffolk”, she says. This consists of 10,522 civilian and 750 military personnel comprising engineers, skilled tradespeople and administrative staffs, along with an additional 4,000 tenant command personnel who work at the base. Annual payroll is $673 million.

NNSY supplants its position as a long established and reliable employer that can attract the talent it needs with a four year apprenticeship program combining academics and trade theory with on-the-job training to quickly qualify journeymen tradespeople. Apprentices receive pay and academic tuition and book expense reimbursement as long as they remain in good academic standing. And they get paid when working, eligible to receive promotion upon successful completion of all program requirements. “We had one instance where a retired high school science teacher enrolled and was getting trained along with one of his former students,” Brayshaw says.

Under the command of Captain Scott Brown, the 107th commander in the shipyard’s long history, NNSY’s physical footprint constitutes 585 acres on the main site and 1,355 acres including all annexes. It comprises four miles of waterfront, five supporting dry docks (one of which is capable of dry-docking an aircraft carrier) and three major piers and wharves. There are 685 facilities on the main site and six annexes. Plant replacement value exceeds $3.7 billion.