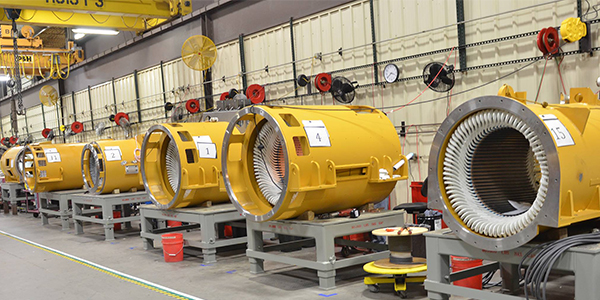 Concentrating on its niche markets while developing new technologies for power generators has enabled Kato Engineering Inc. to weather an unstable economic climate. Positioned well as an engineered solutions provider, Kato has made a name for itself in myriad markets, specifically serving the U.S. Navy, where Kato generators are powering the onboard electronic systems for the DDG program.

Says Kato Sales and Marketing Director Ken Britz, while the industrial/commercial segment of the business – which represents about 50 percent of the company’s customer base – has been effected by the downturn “other markets have been oblivious” to this trend. These markets include the military, specifically the U.S. Navy, for whom Kato produces large generator systems.

“We produce generators from 1000 kW to as powerful as 5000 kW,” Britz explains. Generally, he adds, ships have been powered by propulsion or hydraulics (some still utilize steam). But newer ships are being powered through electric main drives, and because of this, generators are necessary to support the various electronic systems on board. “The power we provide is to operate the electronics on board, the radar, computers. You need about three to four generators per ship at 3000 kW. A lot of power is needed to run all the systems.”

Power generation, he adds, “is a good business to be in because of the growing needs and electrification of ships.” The company’s engineered product line also has seen solid growth; specifically the area of specialty products is where Kato predicts its biggest growth opportunities, says Britz.

Another niche market for Kato is oil and gas turbines, what Britz describes as the “stalwarth of our business. It’s what we’re known for.” Other niche markets for Kato: the traction industry, for which it provides alternatives for mine-hauling trucks as well as other products and power conditioning, and AC motor generator sets used in product testing and power isolation for industrial and military applications.

Kato, Britz adds, has positioned itself strategically to grow in its niche markets, supplying engineered solutions to a broad client base. While the overall growth focus is in engineered power generation, with products developed up to 18 MW to serve niches such as traction and military, the company is set to fully supply its other clients with complete engineered packages.

“We continually are looking at markets and looking to develop products to serve these markets, to fit new needs,” he explains.

New products
Employing state-of-the-art capabilities Kato has again turned out a new generation of products. New in the oil and gas industry is a 2500 KVA 600-volt drill generator, more powerful, higher rated than traditional machines. “In the drilling market companies are going deeper to look for oil and gas, they need more power. We see that as a trend,” Britz says. Last year Kato introduced a 10.7 frame generator for the turbine market for the industrial production of oil and gas, offering up to 7 MW.

In addition, the company developed the turbine-driven LT63 frame machine that is set to hit the market in 2004 offering up to 18 MW for the oil/gas industrial markets.

These machines have the same heavy epoxy for all conductors (rotor, stator, armature) helping to earn Kato generators the reputation for quality and durability. They meet NEMA, IEE, IEC, CSA and other certifications and standards.

They also represent a major improvement to the middle of Kato’s product range, and their design is based on the experience gained from manufacturing hundreds of steam and gas turbine generators, generators that are currently in power generation applications around the globe.

For its industrial customers, Kato is developing a wireless, multifunctional rotor-monitoring device that monitors the internal workings of a generator. Last year the company introduced its package generator product line, a standard product with 250-3000 kW. These packaged generators can meet the broadest range of standby or prime power requirements. Competitively priced, these systems have the shortest build-cycle time in the industry.

Partners, staying lean
Through its parent company, Emerson, Kato Engineering partners with European Leroy Somer, which offers an enormous range of drive systems whose standard components – induction motors, self-starting synchronous motors and DC motors – can be combined with gearboxes for adapting torque and speed, brakes for controlling movement, and electronic systems for overall control, monitoring and positioning. Leroy-Somer has an equally strong presence in the field of energy production, with an extensive range of low and medium-voltage alternators.

The company also has partnered with engineering centers in India and in The Philippines, to whom it outsources engineering design work. “We’ve had a lot of success with them”, Britz says.

Success in house has been tied to Kato’s employment of lean manufacturing techniques, which has enabled companies such as Kato to streamline processes, speed up lead times and improve overall efficiencies – cost savings that ultimately are passed onto the customer.

“We’ve cut out lead times by 50 percent,” Britz remarks. “We’ve seen dramatic changes.” Lean practices put into action on the shop floor also helped to bring efficiencies into the office area, he adds. This was accomplished through the help of a Process Improvement Team – or PIT – which meets regularly to discuss functions and how to make them more effective. Putting the horse before the cart, Kato implemented these new work methodologies before changing over to its new Oracle system.

“We said we needed to clean up what we were doing first before having the new system installed rather than having it installed and then worrying about the waste,” he says.

Continuing an illustrious tradition
Kato Engineering was founded in 1926; two years later, owners Jensen and Wilkenson met the young man who was to become the dominant influence for years to come. Cecil Jones, a graduate of Dunwoody Institute in Minneapolis and master electrician, had developed a device which rural families could use to operate AC appliances from their DC storage batteries. Believing that Jones and his invention would be valuable to Kato, Jensen and Wilkenson hired him to take charge of production. As a result, the rotary Kato converter was an overwhelming success.

Though the original owners eventually left the firm, Kato Engineering Company flourished under Jones’ direction. By 1936, the company had grown from five employees to nine and was producing several small generators.

Kato received its first government contract in 1938 to furnish the original 31 U.S. Army flying fields with AC generators for ground instrumentation needed for aircraft to land. Then in 1939 the government awarded Kato a second contract, and the company was on its way to significant growth.

During the years following World War II, Kato supplied generators to various industries and built a reputation on quality, dependability and the ability to meet specific customer needs with design and manufacturing innovations. The largest generator the company made then was 15 kW, but by 1949 it was turning out 225 kW generators that weighed some 1000 pounds.

In 1978, Kato became a division of Reliance Electric. The acquisition by Reliance resulted in continued growth and investment in Kato – a new facility was added in North Mankato, Minn. in 1981 and then expanded in 1993 and again in 1998. This facility now totals about 300,000 square feet.

Two years after the Kato acquisition in 1978 Exxon purchased Reliance, then a NYSE stock held company. In 1986 Reliance purchased the company back from Exxon in a leveraged buyout and took the company public with an IPO in 1992. In 1994 Rockwell International Corporation acquired Reliance Electric and Kato. In April of 1998, Caterpillar, Inc. purchased Kato Engineering from Rockwell. In June 1999, Kato was purchased by St. Louis-based Emerson Electric.

While its ownership has passed through many hands, Kato’s values – integrity and customer service – have remained a constant for the company. As it continues to provide engineered solutions to some of the most important applications in the world, Kato also will engineer new and better solutions and sustain its position as one of the largest generator manufacturing companies in the world.