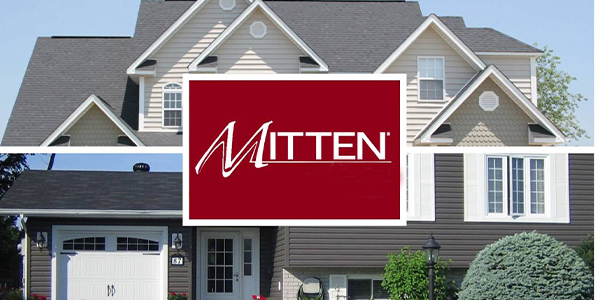 In the interest of full disclosure, I confess that my house has vinyl siding. But before I lived in my current home my former house was clapboard. I painted the entire exterior and recall quite vividly during that laborious weeklong process that I loved the look and feel of clapboard. Now some seven years later I have another confession to make – I was nuts!
Seriously, how can you beat vinyl siding for the exterior of your home? It’s cost effective, lasts forever, is easy to clean, helps insulate the home, and comes in many colors, as well as textures and shapes. In fact, unless you get up close to it, vinyl siding looks like clapboard, but you don’t have to re-paint it every seven years, which is what I’d be doing all over again right about now if I’d stayed in my old house.

Clearly, I am not the only one that has come to the conclusion that vinyl siding is the way to go, which only means that most of us are not as visionary as the business leaders who pioneered the manufacture and distribution of vinyl siding, such as Doug Mitten, founder of Mitten, Inc., one of the leading, independently-owned vinyl siding manufacturers in North America.

In April 1959, Mitten, an engineer, started a plastic production company with one small extruder in the basement of a building in Hespeler, Ontario, Canada. Two years later he came up with a patented process for bonding a flexible-vinyl glazing spline on the inside of a U-shaped rigid vinyl sash section. His invention combined with resident die making capabilities enabled the company to grow and evolve into the custom profile business.

Two years after that key innovation, Mitten expanded into the Atlantic Provinces and by 1980 the company’s first Canadian distribution center opened in Halifax, Nova Scotia. Soon operations went global as Mitten products made their way throughout Canada, the United States, and Australia.

“Doug Mitten’s early success and continued success for that matter had a lot to do with his unwavering commitment to making the best vinyl siding in the marketplace,” said Jay Riley, Vice President of Sales and Marketing, Mitten, Inc. “If you are focused on one thing, you bring an attention to detail that’s hard to match and customers recognize your expertise and craftsmanship, as well as service, which is another hallmark of Mitten’s.”

Outworking the competition
Today Mitten has 300 employees working in two facilities: a 120,000-square-foot plant in Paris, Ontario, and finished goods facility three miles away in Branford. According to Riley, these are small towns, with a total population near 7,500, so Mitten is a major part of the community. Yet, despite the size of the local population and the fiercely independent nature of the company, Mitten has made significant strides toward becoming one of the leading vinyl siding brands in the world. Riley stressed that customer service is a major reason why Mitten products remain a top choice among wholesalers and builders in North America and beyond.

“We bring something to the table that larger manufacturers do not – our personal approach to the business,” said Riley, who is based just outside of Cincinnati, Ohio. “We don’t have large distributors that command a significant part of the business, but what we do have is a dedicated sales force that maintains consistent contact with customers and prospects. We simply outwork the competition by having a dialogue with customers to learn their needs, to listen rather than just sell. I advise my team to be patiently impatient and to be opportunistic and it pays off.”

The industry takes a stand
Mitten faces competition from rival vinyl siding manufacturers all over the globe, but a potentially formidable foe comes from a relatively new building material – fiber cement. Frankly, it’s odd that fiber cement has nibbled at vinyl siding’s market share, most notably in the Atlanta region where a major builder recently opted for fiber cement for some major developments, according to Riley.

“The fiber cement players have done a good public relations job of touting the values of their product, while at the same time spreading misinformation about vinyl siding,” said Riley. “The irony is that fiber cement possesses very few of the valuable qualities of vinyl siding. For example, fiber cement is heavier, labor-intensive, requires periodic caulking, and needs to be repainted on a regular basis.”

Riley admits that his industry could have done a better job of self-promotion, and by not continuously communicating the benefits of vinyl siding, manufacturers left themselves open to such a ploy. Yet what irks him more than lost revenue is the fact that home buyers and builders are being misled and under served. To combat the threat, the vinyl siding industry is launching a PR campaign of its own titled: “America Sides With Vinyl.”

In a compelling brochure, the case for vinyl siding is made: “Some competitors make claims about vinyl siding performance that simply are not true. The Vinyl Siding Institute is dedicated to presenting the facts … Vinyl siding manufacturers offer a broad and ever-increasing spectrum of colors … Ongoing research and development help manufacturers produce high-performance, durable surfaces with outstanding color retention across the entire color palette – including darker options … Just like high-maintenance wood siding, fiber cement siding requires painting to maintain its appearance, adding to the lifecycle cost of the home.”

Additionally, the Vinyl Siding Institute has developed a program that will certify vinyl siding installers. According to Riley this is an important step to bringing much needed uniformity to the vinyl siding industry. “We have let others shape incorrect opinions about the manufacture and application of vinyl siding,” said Riley. “Ours is not a material that gets haphazardly slapped up by inexperienced installers. By recommending that installers go through a regulated certification process we are taking our business to a higher level and delivering better value to end users.”

As for Mitten specifically, business is very strong. About 45 percent of its business is in the United States and an equal amount is in Canada, with about 10 percent overseas in Russia, Poland, South America, Australia, and East Asia. Locally, Riley expects that as the housing market slows somewhat that homeowners will begin to consider re-siding their homes and Mitten is poised to capitalize on the that trend. So whether it’s a new home or a new look to an old home you could say that Mitten vinyl siding fits like a glove.