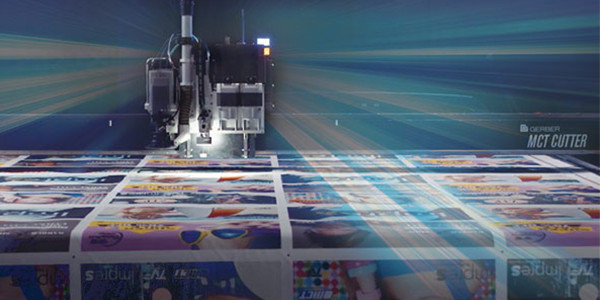 When Gerber Scientific Products entered the sign business about 20 years ago, the company started small – small as in the pre-cut vinyl letters you might see on the glass window entering a store.

Today, the goal of the state-of-the-art sign company based in Connecticut is to think big – big as in larger than life, full color advertisements that, taking advantage of Gerber’s innovative software and high-tech printing capabilities, can cover the entire side of a city bus.

Now, as the company looks ahead to the 21st century, it is once again riding on the cutting edge of technology – this time with signs run by low-energy, light-emitting diode, or LED, technology.

“That is a glimpse into the future,” said Mike Wash, the director of marketing and product management, speaking of the technology that engineers are already calling EDS, for electronic digital signage. Gerber Scientific Products is a unit of the larger Gerber Scientific, Inc.

H. Joseph Gerber’s vision
But then, the ability to see trends ahead of others and to stay on top of the latest technology is what has fueled Gerber Scientific Products for well over a half-century.

Company founder H. Joseph Gerber was born in 1924 and was building radios and circuit breakers. Seven years later, along with many others affected by the Nazi occupation, he was imprisoned in a labor camp, and in 1940, he and his mother fled war-torn Austria, immigrating to the United States.

He started making his mark on the world of science in the 1940s as an aeronautical engineering student at Rensselaer Polytechnic Institute. He discovered a way to reduce the time-consuming nature of plotting points for his math homework. The result was an “expandable ruler” created from the elastic waistband of his pajama bottoms. Gerber’s creation was not only a sensation on campus; it gave birth to the renowned Gerber Variable Scale and later, The Gerber Scientific Instrument Company.

By the late 1950s, Gerber was a respected manufacturer of precise, efficient graphics conversion systems used in both military and commercial applications. The firm had many large corporate customers including RCA, Boeing, and IBM. Although the firm was linked to a number of innovations, the real breakthrough came in the 1980s. That’s when Gerber Scientific Products shipped the first Signmaker product suite, the world’s first automated lettering system for the sign making industry, a breakthrough technology that propelled the company to industry leader status.

Today, Gerber Scientific does business in more than 115 countries. The firm celebrated its 20th anniversary in China with the opening of its newest sales and service office in the city of Ningbo, bringing the total number of locations in China to 15. In fiscal year 2003, the company launched more than 30 new products and 42 employees from each of the company’s four subsidiaries were presented with 45 United States patents, in recognition of their accomplishments in innovation. This included three patents awarded posthumously to H. Joseph Gerber, bringing his total number of patents to over 675.

None was more critical than the development of the Signmaker technology. Wash explained that the development of this groundbreaking product was largely a matter of taking an area in which Gerber Scientific had considerable expertise – which was the development of precision cutting equipment – and applying it to the business of signage. The new product was the first of its kind that could cut small letters to perfection and easily remove the excess material – a process known as “weeding.” “This made sure that signs were both more accurate and cost-effective,” Wash said. “The use was primarily commercial – today when you go into a shop and see the hours of operation on the glass in small letters, those vinyl letters are made on Gerber equipment.”

Working with NASCAR
Over the next two decades, researchers from Gerber Scientific continually refined the product, as signs were increasingly designed on personal computers. Eventually, Gerber Scientific developed devices that cut the refrigerator magnets typically found in the home, as well as the large decals that plaster the side of racecars on the NASCAR circuit. The Edge technology pioneered by Gerber Scientific is particularly good at matching colors, which is important for consumer brands like Coca-Cola or Eastman Kodak.

Wash said that the Gerber Scientific unit currently employs about 100 people, most of whom specialize in product research and work out of the company’s headquarters in South Windsor, Conn., in the vicinity of Hartford. The sign-making unit accounted for more than half of the company’s more than $500 million in annual revenue last year. Stock in Gerber Scientific is publicly traded on the New York Stock Exchange.

In recent years, Gerber Scientific has emphasized what the company calls wide-format ink jet printing – so that wide banner advertising, including the vivid type that is increasingly seen decorating a city bus, can be produced in lively colors and exacting detail. But now, with new technology making changeable, digital signs more possible and more affordable, engineers at Gerber Scientific have been working to give the company a whole new focus.

The Gerber NorthStar System is designed to provide sign shops and their customers with a reliable, rugged, energy-efficient, and safe indoor and outdoor alternative to neon. Gerber Scientific Products has entered into a long-term global strategic alliance with Teledyne for product development and worldwide distribution. This represents Gerber’s first entry into electrical signage. It offers up to 80 percent reduction in operating costs, lower maintenance costs, wider operating temperature range, high reliability, improved safety, reduced electric shock potential, and enhanced durability because there is no neon glass breakage. Gerber NorthStar became available in May 2003 in red, amber, blue and green.

Wash said that more and more customers are drawn toward LED lighting products because of both the large energy cost reduction as well as safety factors. “The lower voltage is less dangerous, and it’s less likely to catch fire,” he said. Wash said that company officials believe that retail outlets like drugs stores and gas stations will increasingly switch over.
Rather than shying away from the challenge, officials are Gerber Scientific Products are excited about the future and the growth of electronic signage. Wash imagined a world in which signs at a shopping mall are geared toward senior citizens in the middle of a weekday, and change over after 3:30 to messages for teenaged girls.

It’s a long way from the expandable ruler – and the mark of a company that continues to adjust just like H. Joseph Gerber’s first invention. 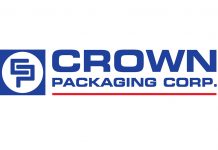 Silberline to Reduce its Carbon Footprint 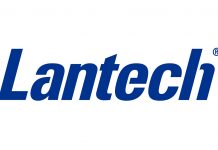