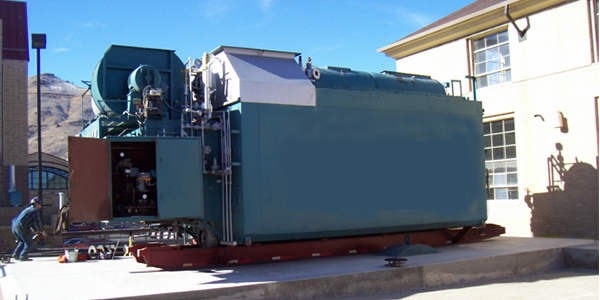 If you think of a boiler as an old-fashioned way of delivering energy, then you haven’t been to the oil-laden sands of northern Alberta, where a long-established company called Nebraska Boiler is helping to fuel a revolutionary new method of generating power for the 21st Century.

“The northern Alberta tar sands are very exciting right now – that’s kind of a new market for us,” said Jason Jacobi, Proposal Manager with Nebraska Boiler, based in Lincoln. Neb. “We have a lot of orders now for boilers at refineries and other facilities up there, all related to the production of natural gas and of fuel oil.”

Jacobi said that the Alberta market is shaping up as a huge market to participate in. Some experts have predicted there will be a whopping $125 billion in capital spending in the region over the next 15 years, with $10 billion of that coming in 2006 alone. It’s just the biggest piece of a large iceberg – a major uptick in energy exploration and refining that is sparking a new era of growth at Nebraska Boiler.

From its humble origin as a locally oriented boiler repair shop in Lincoln some 85 years ago, Nebraska Boiler has ridden its innovative and flexible approach to become the world’s larger manufacturer of packaged industrial watertube boilers, selling more than 7,000 worldwide.

Heavy on industry
“Our customer base is mostly heavy industrial users – refineries and petrochemical and oil and natural gas,” explained Rocky Bahramzad, the Vice President for Sales and Marketing of Nebraska Boiler.

In particular, the company became an industry leader in D-type boilers in the early 1950s, and has never relinquished that leadership role. In the meantime, Nebraska Boiler developed expertise on other models, including the A-type and the O-type, making it one of the only companies to feature all three.

The roots of the company go back ever further, to 1921, when it was founded by Walter R. Way and Charles Shaw. Back then, the fledgling company largely found work with creameries, meat packers, large hotels, laundries that had steam plants with steam engines for power, small tailor shops, dry cleaners, and with farmers. It grew by expanding its manufacturing efforts, especially when it began manufacturing small watertube type units in sizes from 6 to 60 horsepower around the time of World War II.

By 1962, Nebraska Boiler had moved into a more elaborate, 86,000 square foot facility in Lincoln, which helped the firm as it moved into new areas like superheaters and the symmetrical “O-type” boiler. Two major developments also drove the future direction of the company. In 1985, Nebraska Boiler purchased a boiler company from Oklahoma named Energy Recovery International that specialized in heat-recovery watertube Boilers known as HRSGs, adding a new product line.

In 1998, Nebraska Boiler and ERI were purchased by Cleaver-Brooks, an established player in the boiler industry for decades. The relationship with Cleaver-Brooks, which owns and operates an array of boiler and related companies, has helped Nebraska Boiler to offer a broader array of products and to package together sales of boilers and burners, something rivals cannot do. That includes much larger boiler designs of modular type that was not available to its customers before, which is what has opened the door to large markets like the Alberta oil fields.

Making it big
Nebraska Boiler has worked extensively since 2001 with a Cleaver-Brook subsidiary called NATCOM, which integrated its exclusive 9 parts-per-million burner technology with Nebraska Boiler, allowing them to compete successfully in the Ultra-Low-NOx emissions market.

“It’s definitely great to have the backing of a larger corporation,” Bahramzad explained. “It enables us to have access to the largest R&D facility in our industry for product improvement and new product development.”

The partnership has allowed Nebraska Boiler to do things like custom-build 295,000-pound per hour monster boilers like the ones being used in the soybean oil extraction process in Argentina. The boilers were transported on a trailer 196 feet long with 76 wheels and had to be operated by three drivers when turning corners. These are the largest one-piece boilers built by the company, taking four months to construct Nebraska Boiler has continued to grow in size over the years. Its current site now has over 200,000 square feet of manufacturing as well as office space, and the company – now employs in excess of 200 people in Lincoln.Company officials said they have invested millions in the site in recent years. “One of the goals of Nebraska Boiler has been to maintain design engineering and manufacturing in-house,” explained Bahramzad.

Unlike some other boiler manufacturers, Nebraska Boiler has continued to make all of its major components here at its domestic site. In order to be able to do that, officials noted, the firm has made a major commitment to lean manufacturing, which so far has improved productivity at the Lincoln plant by 30 to 40 percent.

That type of ingenuity has not only allowed Nebraska Boiler to remain by far the No. 1 company within the United States for packaged boiler sales, but it has helped the company to maintain a large business outside North America, where as many as four-in-ten of its products end up. The firm works with about 40 international sales reps in addition to the nearly 50 it has domestically.

Either at home or abroad, an increasing amount of the work that Nebraska Boiler carries out relates to custom orders, particular to meet customer demands on the type of fuel that is to be burned. Currently, as much as 85 percent of the boilers that the company ships out are custom built.

“A lot of customers have a waste stream that can supplement the natural gas, so we try to give them an economical solution,” Jacobi explained. A lot of that work is done in partnership with NATCOM. Overall, about 90 percent of the research and development work carried out by the company centers on increasing fuel efficiency.

Indeed, the story of Nebraska Boiler has been a tale of innovation, where the one thing that keeps bubbling up is a new idea.