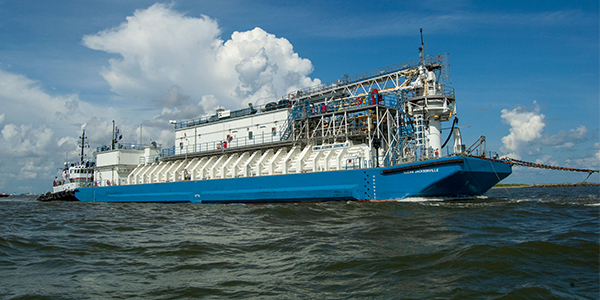 Conrad Industries, Inc., is a company that looks to create what its president, William Hidalgo, calls “that special fit” with its customers. Based in Morgan City, La., Conrad builds a variety of marine vessels for customers in both the commercial and government sectors. From its dry docks in Morgan City, Orange, Texas, and Amelia, La. (its newest and most ambitious facility), the company produces cargo barges, tank barges, lift boats, push boats, towboats, offshore tugboats and offshore supply vessels. It also performs repairs, refurbishments and conversions for these vessels.
According to Hidalgo, Conrad purposely limits its work to those projects it can execute under roof. “We go primarily after niche markets, markets for new vessel construction that fit our facilities,” he says. “As far as size and capacity, we will build the equipment we can build under roof. We think it’s important for us to stay in these niche areas, to pay a lot of attention to those areas that have been good to us in the past and that we feel will be good to us in the future.”

Good Weather
Conrad’s concentration on projects it can do under roof is born of necessity, Hidalgo states. “Being in Louisiana, which has quite a bit of rain, requires us to do everything under roof so we don’t lose man-hours,” he explains. “Rainouts would cause lost time to other dry-dock facilities.”

The company’s indoor fabrication shops add up to more than 230,000 square feet. The time savings from the elimination of weather delays have given Conrad a tremendous competitive advantage by making it easier for the company to meet its customers’ critical production schedules. “We pride ourselves for our on-time delivery and service,” says Steve Berthold, Conrad’s director of sales. “Everything in our production is under roof and we’ll continue to grow in this aspect.”
As Hidalgo says, being indoors provides yet another benefit to the company: “Being under roof also allows us to attract employees who know they won’t lose time due to the weather, a key factor because these are all hourly employees. They also benefit because in summer, it’s cooler inside and in winter, it’s warmer.”

Conrad has created a healthy climate for its employees in other ways — specifically, by giving them ultimate responsibility over projects. Hidalgo says, “Every project has a person assigned as project manager from inception through estimation to completion. This person doesn’t just get a project to finish. He begins right at the estimation process. It allows him to get the full feel for the project, and it gives the manager the feeling that the project is his baby. If it goes well, he gets the credit. We reward him for his success both monetarily and through positive communication.”

Armed Forces Network
The Morgan City plant includes five dry docks and has lifting capacities ranging from 900 to 3,000 tons. It also includes a submersible barge for launching new vessels and roll-on/roll-off repair projects. The Orange facility has a six-bay fabrication shop with 12 shop cranes ranging in capacity from 10 tons to 30 tons. Also part of this location are three load-out turntables ranging from 600 tons to 1,600 tons, and an 800-ton roll-on system for transferring fabricated assemblies to dock-side vessels.

“Orange handles all of our work for the military,” says Hidalgo. “We have contracts with the U.S. Army Corps of Engineers for 12 boats, which includes an add-on option for more boats. We also work with the U.S. Navy and any other government agency that would require equipment.”

Plans to expand this facility are now in the works. “We enjoy doing military business,” Hidalgo says. In fiscal 2000, government business accounted for 19 percent of Conrad’s total revenues “We would look to expand in this area and probably will. Of course, it depends on the government’s budget. Most of the equipment we build and furnish to the government is small equipment, and those departments have to have the funds for more work.”

New Port of Call
The major excitement around Conrad now is its new dry dock in Amelia. The new facility is an ABS-class, 10,000-ton dry dock with the capability to handle larger barges and offshore vessels. “This dry dock brings us into a new area of repair,” Hidalgo says. “Potentially, 100 people could be working on it at any one time, enabling us to work on much larger vessels, which typically require more people.”

Currently, Amelia’s stated capacity calls for vessels of up to 300 feet in length and 80 feet in width — but it has gone beyond that. “We just dry-docked a 400-by-100-foot vessel there, and we anticipate dry-docking a vessel measuring 400-by-125 feet at some point,” Hidalgo says. “It’s a whole new segment of business for us, and it should have a tremendous impact on our revenues. Amelia could double the repair manpower load we have now, which now is 130 to 150 people. It could add another 100 people, potentially.”

The Amelia project isn’t done yet, either. “We’ll be adding to this facility over the next three to five years,” Hidalgo states. “When it’s done, Amelia will have 120,000 to 130,000 square feet of fabrication space under roof.”

The new facility should provide a further boost to Conrad as it goes forth in what it sees as growth markets, such as lift boats, dredging vessels and supply boats. Berthold says, “The biggest activity is in the lift-boat market, and we’ve got projects going for lift boats in both Morgan City and Orange. We now have built or are under contract to build 15 of these.” Niche businesses will dominate Conrad’s customer base going forward. Even as the company looks to be more diversified, Hidalgo says, “we’ll look for niches in those new areas as well.”