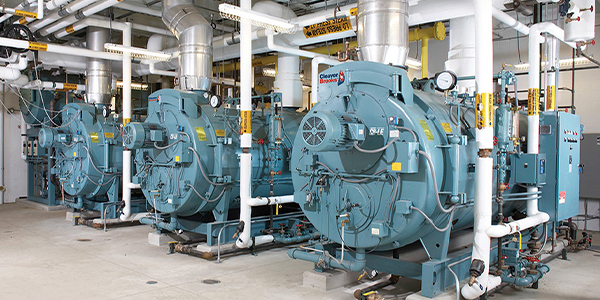 Starting a brand new business venture at the height of the Great Depression could be seen either as a foolish gamble or a bold, contrarian move. In the case of Cleaver-Brooks, history has shown it was clearly the latter of the two.

Cleaver-Brooks was created on Jan. 1, 1932, in Milwaukee, at the nadir of the Herbert Hoover administration and when Franklin D. Roosevelt’s New Deal was more than a year away. But it was a case of perfect timing, because the company’s founders, the engineer and inventor John C. Cleaver and East Coast businessman Raymond Brooks, had developed the first portable asphalt heater.

The 1930s would prove to be an era of major road construction in America – greatly accelerated by the millions of dollars that Roosevelt invested in public works projects to reduce unemployment. And the so-called “packaged boiler” marketed by Cleaver and Brooks soon became a staple of the conversion of the nation from dirt roads to asphalt and rapid movement.

“It was almost 30 years after Henry Ford had developed the Model T Ford, and even through the Depression, people were still driving autos, and with this dynamic came the demand for road building,” said Steve Connor, Director of Marketing for Cleaver-Brooks.

Curbing pollution
Over the next-quarter century, Cleaver-Brooks would branch out into a wide range of boilers for commercial/industrial uses and become a leading company in the field. Today, the division is on the cutting edge of a new revolution in technology, developing boilers, burners and control systems that save dramatically in fuel consumption while meeting the new, much stricter standards for clean air.

“That’s the way we’re going – more efficient and less polluting,” Connor said. “And we’re developing the control technology in such a way that it enhances this process while providing our customers with considerably more boiler room intelligence, safety and communication capabilities.”

The story of Cleaver-Brooks is closely intertwined with American history, and American ingenuity. The company actually got its start in 1929 as the John C. Cleaver Company, but it would be two years later that the founder met Brooks and developed a marketable portable asphalt heater. The Cleaver-Brooks wheeled heater was capable of pulling up to a rail car loaded with bitumen, the critical ingredient in asphalt and, using a gasoline driven engine for combustion air and fuel oil delivery, heated the mixture on the spot – an invention that rapidly sped the construction of roads across America.

As word spread about the technological know-how of the new company, it began branching out into new areas. Later in the 1930s, with the asphalt-related business booming, the owner of a leading dairy in Wisconsin approached Cleaver about renting a portable unit for his facility after his boiler broke down. It worked so well, he took the wheels off and made the boiler permanent. Soon, Cleaver-Brooks was developing expertise in building industrial boilers for numerous applications.

World War II was another turning point for the firm. “There was a sudden demand for all sorts of things involving steam production, and Cleaver-Brooks was a big supporter of the war effort,” Connor said. For example, the Military asked Cleaver-Brooks to develop solutions for any number of applications including mattress sanitizing, heating water for portable showers, portable laundries, desalinization, and even bomb cookers. “Our company grew because of what we did during the war,” he notes.

Top-notch sales force
As the company expanded, it also developed a sales organization that would become the driving force for future growth. Connor said that the company had its first-ever sales meeting around the time that World War II was winding down, hooking up with independent companies that would market Cleaver-Brooks boilers on a commission-basis in defined territories across North America. “Most of these companies (representative offices) are still with us today,” he said. In addition to working with roughly 50 such firms in the United States and Canada, the company has an active sales force around the world, from Hong Kong and the Pacific Rim to Latin America. These all provide application and product sales expertise along with after sale service and parts.

As the company continued to grow and prosper, it moved away from its original asphalt heater products and concentrated on packaged steam and hot-water boilers (firetube and watertube) that its reps sold to various commercial, institutional and industrial markets, including schools, universities, hospitals, paper products, tire-and-rubber, and pharmaceuticals. Currently, the company’s largest production site is its 190,000-square-foot plant in Thomasville, Ga. In addition to its headquarters in Milwaukee, Wis., Cleaver-Brooks also has facilities in Lincoln, Neb., Stratford, Ontario, and Montreal, Quebec. Connor said the firm’s total employment is about 500 people.

Today, much of the company’s research and development focus is aimed at developing boilers that substantially reduce pollution from nitrogen oxide, which is known in the field as NOx. Its Canadian-based division, NATCOM and Wisconsin-based division Industrial Combustion, bring together more than 100 years of combined in-house combustion experience and 21st century state-of-the-art technology to deliver high efficiency, ultra-low NOx burners.

These burners can be found worldwide on packaged boilers in single burner sizes ranging from one to 600 MMBTU/hour capacities and on multi-burner boiler applications. Cleaver-Brooks supplies retrofit burners for all boiler makes to virtually any industry Connor said that earlier this year the company introduced its Promethean and Criterion line of boilers, its most advanced models yet incorporating the latest burner technologies.

“The federal government is starting to put some real teeth into the Clean Air Act that was enacted in the 1960s and 70s and subsequently modified,” Connor said. “They’re putting a lot of pressure on the states and the localities to do something about air pollution coming out of stacks and exhaust pipes.” He said that Cleaver-Brooks, with its recent boiler and burner developments along with its advancements in control technology, has positioned itself to capitalize on the various opportunities available as solution providers look for boilers and burners which emit the least amount of noxious gases to the atmosphere.
Connor said that Cleaver-Brooks is also getting more involved again with combined-cycle technology and waste heat recovery applications wherein heat given off by natural-gas fired turbines or other sources is put through (waste heat) boilers to generate steam and hot water. “It’s an industry all to itself,” he said. “It’s huge and it also ties into saving energy – that’s what Cleaver-Brooks is all about.”

For a company that started out against the grain, it’s nice to go with the flow for a change.