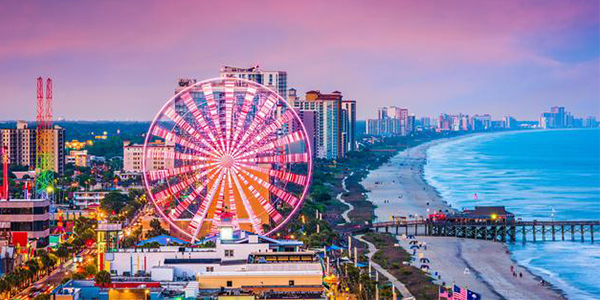 Robert Geolas was surprised when he discovered South Carolina’s Clemson University was partnering with government and corporate organizations to create – not a biotech, pharmaceutical or IT research center – but a campus dedicated to the next generation of automotive research and technology.

“I was excited that someone was taking on a new topic, not another IT and biotech, but my first question was, ‘Why that?’ I was surprised they didn’t choose what everyone else in the country was doing; no one talked about doing something exclusively for the automotive industry,” remarked Geolas, who had learned of the project while working at North Carolina State University’s 1,300-acre Centennial Campus, which also was in the midst of developing a research park.

Then he found the venture had the support of strong corporate partners such as Michelin and BMW, which operates a state-of-the-art factory in Spartanburg, and further discovered a study undertaken by economic development expert Michael Porter of Harvard, which concluded that the wave of the future was toward clustering: geographic concentrations of related companies, academic institutions, labs and associated agencies that, because of their proximity and linkages, enhance innovation, productivity and the creation of jobs.

Geolas is now executive director of the Clemson University International Center for Automotive Research, (ICAR) an engine that is set to help drive South Carolina’s growth and has already spurred momentum months before its official 2005 opening. It is envisioned that ICAR will help make the southeastern United States an economic cluster of innovation for the automotive and motorsports industry. The project has generated more than $115 million in private and public support; in addition to BMW and Michelin, IBM and Microsoft have also come aboard as partners and the prospects for additional corporate linkages is far from ebbing.

“I was very taken aback and intrigued when I looked at the public and private partnerships,” Geolas remarked. “I’m excited, because we are in the right time for this effort; there is an industry need to collaborate and to be more innovative within the automotive industry.”

From textiles to high tech
ICAR represents the core of South Carolina’s desire to mirror the fiscal and economic momentum of other states and to become a major player in the global economy. According to a report issued by the Palmetto Institute, organization established to promote an environment in the state that helps to increase the wealth of its citizens, “It is time for the state to move to the next level of development. The positive force behind this message is that the people of the state are ready and the benefits will be a higher quality of life.”

To further this movement, it was Porter’s reasoning that “an evolving economic development framework can provide some guidance,” and that part of this framework involves the development of stronger industry clusters and the associated networks that connect businesses with one another as well as sources of technology, governments, and social, cultural, and educational institutions.

Geolas, of course, as a member of the board of directors of the National Association of University Research Parks, has long been a proponent of clustering. “I am a huge advocate for clusters; economic development continues to become more competitive and complicated and we need to do a better job of understanding the needs of businesses, about the degrees of relationships and market needs. A research campus provides specialized opportunities to help with the long term success of the industrial group.”

And as the Palmetto Group’s report makes clear: “Firms are the principal sites for the creation of wealth and cannot be viewed in isolation but as part of a network of public and private sector institutions whose activities and interactions initiate, import, modify and diffuse new technologies.”

There’s no doubt that South Carolina’s manufacturing sector is undergoing significant change; fading are industries that represented the lower wage jobs such as textiles, apparel, food processes, wood and furniture, according to The Strategic Plan for Economic Development in South Carolina (SPED). Higher wage jobs are being created in the chemicals, industrial machinery, transportation equipment, paper and primary metals industries. This fact coupled with a demographic trend showing a postwar flow of domestic migration from the Northeast and Midwest to the Sun Belt is working to the state’s benefit. According to SPED, immigration from other states accounted for 44 percent of South Carolina’s population gains in the 1990s.

Song of the South
There are many reasons for choosing South Carolina as a place to do business: it offers the majesty of mountains and the beauty of the ocean; the capital of Columbia as well as cities such as Charleston are steeped in history and the entire state is rich in natural resources.

People relocating to South Carolina will find other aspects of the state’s lifestyle and culture equally attractive, particularly in terms of their affect on the pocketbook: Office and industrial real estate costs are very competitive in South Carolina. Only Alabama has lower priced commercial and industrial rental properties. Electricity costs are very modest as well. The average business facility spends about 2.4 percent of its operating budget on energy services.

To further aid its business sector, South Carolina maintains a very vital port system, which includes the Port of Charleston, Port of Georgetown and Port of Port Royal; all are linked through major Interstate 26. Other main interstate arteries are within two miles of all Port Charleston terminals. In addition, there are 150-plus trucking firms in operation in Charleston. Air shipping is achieved via two major airports: Columbia Metropolitan Airport and Greenville-Spartanburg International Airport.

Overall, South Carolina compares favorably in most quality of life indicators. Housing affordability is higher than most benchmark states, crime rates are among the lowest of the benchmark states, climate is generally warm and not too extreme, and air quality is above the national average.

Pay it forward
Hunter Howard, president and chief executive officer of the South Carolina Chamber of Commerce, says the goal now of business and government organizations “ is to take those assets and strengthen them.”

The chamber’s role, he adds, “will be as an advocate in the state house for increased productivity and decreasing business costs for our members to be globally competitive.”

A significant part of this economic program is the South Carolina Council on Competitiveness, co-chaired by South Carolina Governor Mark Sanford and Blue Cross Blue Shield of South Carolina CEO Ed Sellers. Commerce Secretary Bob Faith says the effort is comprised of 50 business academic and government leaders. “We’ve worked hard,” he says, “to lay out a vision on where we want to head. Our primary goal is to raise the per capita income and to increase the wealth of our state.”

While enhancing this image, South Carolina is also seeking to change its view in the minds of those who mostly see the state via its beaches or by visiting historic Charleston. “People are first exposed to South Carolina usually from being on vacation,” he says. “They leave and see that we have a great quality of life, but generally don’t know more than that. We want to tell them that this administration is committed to improving the business climate. While we have them already sold on the lifestyle, we want the opportunity to tell them the rest of our story.”