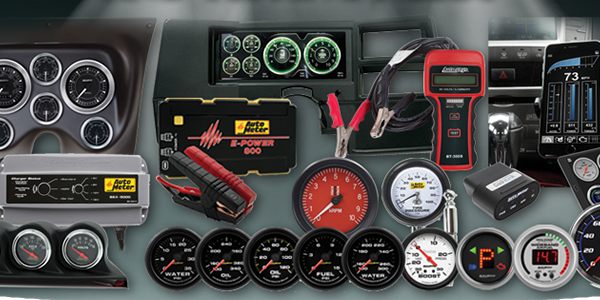 A full 90 percent of the racing market uses Auto Meter Products’ gauges and tachometers. Every weekend on television when viewers peer into the cockpit of a NASCAR racer with the help of an in-car cam, if they look at the dashboard it’s likely the Auto Meter name will be there. Whether the racing is NASCAR, NHRA Championship Drag Racing, off-road, monster trucks, or high performance marine, Auto Meter has become the dominant name in the industry.

A Commitment to New Products
Auto Meter’s rise to prominence is due in large part to the company’s ongoing commitment to developing exciting new high-tech products. Each year Auto Meter unveils anywhere from 70 to 100 new products, product upgrades, or product modifications. Most recently, Auto Meter unveiled a new addition to its Playback Tachometer line. The company also has just introduced two new instrument series’ known as Lunar and Cobalt, among other new products.

The company’s catalog describes products such as its famous Playback Tachometer, available in the popular Sport Comp series. With the Playback Tachometer, operators can review their entire run right on the tachometer and right at the track for a detailed view of their car’s performance under extreme race conditions. The tachometer allows a driver to record and review a run of up to one minute and 20 seconds, with plenty of time to capture the burnout, stage process, and full pass. The replay can be viewed on the tachometer in 1/3 real time, and enhanced using the fast forward and fast reverse function. Data is recorded at a rate of 50 samples per second, for optimum accuracy. Four shift points can be selected, and an Auto Meter shift light may be added to increase driver consistency.”

Two new lines from Auto Meter include the Lunar Series of competition instruments and the Cobalt Series. The Lunar Series features a bright white dial face, black numbering and increments, and a silver bezel. When lit for night-time use, the Lunar 10,000-rpm shift-lite tachometer and gauges emit a futuristic green glow, provided by a thin layer of phosphor that’s exposed to a mild electric charge. The Lunar Series gauges are available in mechanical, electric, and full-sweep electric versions. The lighting is wired through the OEM switch and light intensity is controlled in the same way the stock dash lighting would be.”
Auto Meter’s electrifying new Cobalt Series features a 10,000-rpm shift-lite tachometer and various system gauges. This exclusive assortment of full-sweep electric gauges uses the very latest in stepper motor technology and high-end sending units for unsurpassed accuracy and performance. The Cobalt Series features a black dial face, anodized bezel, white numbering, and blue accents. At night, an explosion of Cobalt blue light shines through the dial and into any interior scheme, from stock to shock. A glowing red gauge pointer provides clear contrast and visibility. Lit using LED technology, the lighting produces no heat and offers a lifetime of cool lighting.”

“The market is excited about all our new products, especially our new Cobalt line,” says Jeep Worthan, Auto Meter’s director of marketing. Auto Meter also has introduced new full-sweep electric boost/vacuum gauges and nitrous pressure gauges. Described as an advance in accuracy, these gauges use high-end sending units, designed for unmatched precision. The sender is designed with “smart” signal conditioning electronics that provide temperature compensation, and self calibrate each time the ignition is turned on. As the vehicle is powered up, an automatic adjustment reading is taken within the sender before the engine produces vacuum, to zero the pointer and to compensate for the correct atmospheric pressure. The full sweep, stepper motor gauges are resistant to vibration and provide smooth pointer movement. The boost gauges feature an LED warning light and a peak recall function for the ultimate in monitoring meters. Two boost gauge ranges are available in many popular Auto Meter styles. Electric nitrous pressure gauges are especially made for those who would like to avoid using braided steel line and are appropriate for A-pillar pod mounting.

Other new additions to the Auto Meter product line include an expanded carbon fiber gauge series that utilizes a real carbon fiber dial installed on Auto Meter’s ultra-lite case and meter movements. The new gauge style has been highly praised by many builders and racers alike as the hottest gauge series on the market today. The Carbon Fiber series includes not only gauges, but also speedometers and tachometers. The electric speedometers feature a LCD display that adds a modern look and function as a standard odometer and trip odometer.

Builders and racers aren’t the only ones who are thrilled with Auto Meter and its new lines of performance products. The Specialty Equipment Market Association, the industry group representing close to 4,000 manufacturers and distributors of performance instrumentation, hosts the prestigious SEMA industry trade shows annually. “I can’t tell you what an honor it is to receive this award,” says Worthan. Wining the award is nothing new for Auto Meter. It is one of only two companies to have won the award four times. The company also won the award back in 1983, 1985 and 1992.

Auto Meter sells its products to performance product warehouses that distribute them to jobbers and speed shops. Consumers also can purchase Auto Meter products at automotive chains such as AutoZone, CSK and Pep Boys. The company does a considerable amount of business through mail order catalogues, including the Summit Racing, Diego’s, Sears, and JC Whitney catalogs.

The OEM and Testing Equipment Divisions
While Auto Meter primarily targets its products to the automotive aftermarket as performance add-ons, the company does have an OEM division that markets products to the large automobile manufacturers. Auto Meter tachometers can be found in Chrysler’s Plymouth Prowler. “We mounted a specially-made tachometer for the Prowler on the steering column of the car,” explains Worthan.

Auto Meter is headquartered in Sycamore, Ill., where has a 45,000-square-foot manufacturing plant. The company’s OEM and test equipment divisions are located in Utah. Two plants in Utah offer combined manufacturing space of 125,000 square feet. “Our plants in Utah also manufacture for our Sycamore facility,” adds Worthan. Auto Meter has 500 employees.

Up until 2002, Auto Meter was a family owned business founded in 1957. This year the Harbour Group, an investment company out of St. Louis, Mo., acquired the company. “The acquisition is a step in the right direction for Auto Meter,” says Worthan. “The Harbour Group is committed to our success through the investments it plans to make in Auto Meter.”

“All of our divisions will offer tremendous opportunities in the next few years,” adds Worthan. “Each of our divisions have demonstrated strong growth over the years. That said, given that our involvement with automotive OEMs is new, the greatest potential is derived from our OEM division. The automotive OEM market is a huge market worth millions of dollars and we’re still a small player in that particular market.” Given Auto Meter’s dominance in performance instrumentation, it will not be long before the company replicates this success in the OEM market.