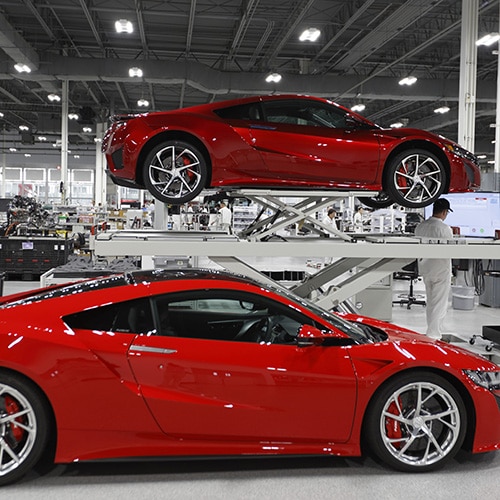 It’s unprecedented but making historic decisions is part of the company’s culture and this one is no less important: Honda will manufacture its top-of-the-line Acura NSX in the United States, the first time Honda has decided to manufacture this model outside of Japan.

In making this move, Honda has acknowledged that the plant at which the vehicle is manufactured is located in the center of the one of the greatest collections of manufacturing, engineering and R&D talent in the world.

“We were able to draw upon this in putting together our team,” notes Tom Shoupe, Executive Vice President and Chief Operating Officer Honda of America Mfg., Inc. “Realizing production is a testament to the hard work of the entire team.”

The ability to meet that triad of production excellence has helped the company mark the 30th anniversary of the Acura brand this year. Acura was the first luxury brand from a Japanese automaker firmly rooted in the U.S. with the highest reputation for quality and reliability. Last year, nearly 98 percent of Acura cars and light trucks were built at the company’s plants in Ohio and Alabama. More than half of all the Acura vehicles sold over the past 30 years were made in North America.

The move speaks directly to Honda’s ability to build quality vehicles and to be, to paraphrase Shoupe, a company that the planet wants to exist. The true foundation of Honda’s success, he adds, “is built on how our associates learned to focus on customer satisfaction with a high level of teamwork, craftsmanship and a passion for overcoming challenges.”

Large and Successful
The history of Honda in the U.S. begins in 1977, partially through friendships of Honda founder Soichiro Honda and then Ohio Gov. James Rhodes. Honda constructed a $35 million motorcycle plant in Marysville, Ohio, with production beginning in 1979 with the CR250R motocross model.

In November 1982, Honda became the first Japanese automaker to begin automobile production in the U.S. at its nearby Marysville Auto Plant. Construction of an engine plant in Anna, Ohio and a second Ohio auto plant located in East Liberty quickly followed these operations.

Today, Honda operates 12 companies in Ohio, producing a wide range of Honda and Acura automobiles, automobile engines and transmissions. The company has continued to expand local production, and since 1982, has manufactured more than 17 million automobiles in the state.

Honda of America began with 64 associates and has grown over the past 35 years to become a manufacturing leader employing more than 14,000 associates in the state.

Nearby, the East Liberty Auto Plant manufactures the Acura RDX and Honda CR-V. The plant, known for its flexibility in manufacturing, is preparing to add the Acura MDX in 2016.

The Anna Engine Plant is Honda’s largest engine plant in the world. The facility has just added a new engine build room for the Acura NSX’s 3.5-liter twin-turbocharged V-6 engine. The NSX engine is hand assembled by the plant’s master builders. Each NSX engine is machine balanced, bench tested and broken-in to the equivalent of 150 miles of service to ensure that every NSX engine is track-ready upon customer delivery.

Consistency in Quality
Within all of these plants, all of Honda’s associates conform to the Global Honda Quality Standard which requires the company to manufacture products that are satisfactory to the customer. Its North American Quality Manual provides more specific direction.

“We use common rating scales to rank problems and set priorities, always keeping on the customer’s viewpoint at the forefront,” Shoupe points out. “Quality leaders from all the plants collaborate continuously on issues, methods, and customer viewpoints. One of the most important things for all of us at Honda is to promote a culture that strives to continuously improve the quality of our products.”

Inherent in Honda’s drive for quality is a dynamic R&D presence in the U.S., which is today 1,600 employees strong. Indeed, Honda R&D Americas, Inc. (HRA) is responsible for creating advanced products and technologies that provide new value to Honda and Acura customers.

HRA has the capability of “complete product creation” – developing all-new products, starting from market and technology research and design styling through engineering design, prototype fabrication and testing, local parts procurement, and support for mass production preparation. With major facilities in California, Ohio, North Carolina and Florida, HRA is engaged in the development and testing of Honda and Acura automobiles, and Honda power sports and power equipment products, and is also taking a leading role in the advancement of leading-edge safety, driver assistive and environmental technologies.

It’s About Setting Standards
Shoupe stresses that Honda’s eight auto plants in North America produced more than 99 percent of the Honda and Acura cars and light trucks sold in the U.S. in 2015. Production flexibility has long been a hallmark of Honda’s North American manufacturing success, enabling the company to add production of new models and move production between plants to optimize capacity and meet the changing needs of its customers.

“Honda associates in North America will help set the standards for production processes for key global products that also are made in other regions.” Shoupe says. “They share their knowledge and expertise to support Honda plants all around the globe.”