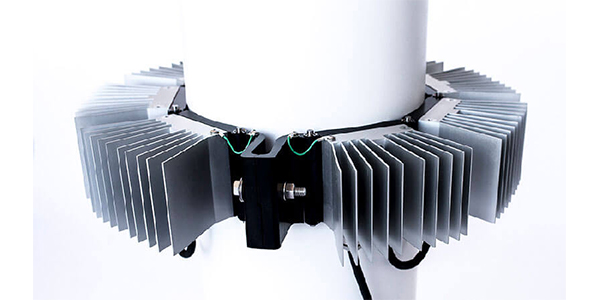 At Marlow Industries – the leading manufacturer of high-tech, thermoelectric cooling systems – there are many things to talk about, including membership in the exclusive club of Malcolm Baldrige Quality Award winners, or how the company’s devices are used in everything from state-of-the-art DNA cyclers to thermal imaging devices to thermoelectrically cooled beer chillers.

But some of the company’s most dramatic news in 2003 was pretty hush-hush.

While officials at the Dallas-based company can’t go into much of the details “from a security standpoint,” they acknowledge that Marlow manufactured thermoelectric cooling devices were used in a number of the military’s smart weapons.

“Typically, smart weapon platforms use infrared technology in their targeting systems and infrared detection need cooling and temperature stabilization, and thermoelectric devices can bring the temperature down to –100 C and control to one-hundredth of a degree,” says Barry Nickerson, the president and COO of Marlow Industries.

The boom in defense work, not to mention success in medical and industrial products and other areas, has helped Marlow Industries pull through what Nickerson has called the company’s “nuclear winter” – the massive slowdown in spending on telecom equipment that had been such a huge source of revenue in the late 1990s.

Rebound by 2005
“We positioned ourselves for an extended economic storm,” says Nickerson, a longtime Xerox executive who became the president of the privately held company in 2000. He said officials at Marlow Industries expect the economy in the second half of 2003 to remain tight but are already working towards a business recovery beginning in 2004.

The company is celebrating the 30th anniversary of its founding as a small, defense-oriented business that started with just five employees. Raymond Marlow was the original founder of Marlow Industries and is still the company’s Chairman of the Board and CEO.

A thermoelectric module is a small solid-state device that can operate as a heat pump or as an electrical generator. When it is used as a heat pump the module utilizes the Peltier effect to move heat and is called a thermoelectric cooler. In 1834 Jean Peltier discovered that the passage of current through the junction of two dissimilar metals produces a cooling or heating effect depending on the direction of the current. In the 20th century, Russian scientists refined the process, and today Marlow Industries is the world wide thermoelectric leader.

One of the potential future uses of thermoelectric devices is expected to be in the area of power generation. Nickerson noted there is increasing interest in the diesel trucking industry for possible power generation applications that can convert waste heat to electric power. In the late 1990s, the biggest customer of Marlow Industries was the fast-growing telecom market. Here, the lasers that are used in fiber-optic communication need to be temperature stabilized, which can be accomplished with a thermo electric cooler solution. When large companies like Worldcom and Qwest were rapidly expanding their networks, there was a huge demand for these devices, but the market ground to an abrupt halt starting in the year 2001.

It wasn’t easy for Marlow Industries to adapt, but the small company has always excelled in running as efficiently as possible. In 1991, it became the second small company in the nation to win the Malcolm Baldrige National Quality Award, which had been created by Congress in 1987 as a way of recognizing and rewarding American world class quality companies. Quality is a “way of life” at Marlow Industries and is reflected in every step of the manufacturing process. The focus of every Marlow employee is reflected in the company’s Quality Policy and focuses on “doing it right today (quality) and better tomorrow (continuous improvement).

‘Mini-factories’
A key factor in winning the award was empowering the employees of Marlow Industries to in effect run their own units as “mini-factories,” giving them the final say on manufacturing processes and quality control issues, thus eliminating waste and reducing overhead. The measures – in which employees create their own problem-solving teams to deal with issues in their section of the company – reduced waste by more than half and reduced manufacturing costs by more than one-third in just a few years.

Indeed, awards have been heaped upon Marlow over the years. The company was recognized by Industry Week magazine in 1993 with the Top 10 Best Plant Award and as one of America’s Top 25 Growing Small Manufacturers in 1999. Marlow Industries was ISO-9001 certified in 1998 and became the first and currently only thermoelectric company to be ISO-9000: 2000 certified – one of the first 100 companies in North America to pass the new 21st Century standard.

In response to the telecom slowdown, Marlow Industries streamlined its organization and reengineered its processes. The firm, which has field offices in England and Tokyo, entered into a strategic arrangement with LeeMAH Electronics to manufacture its more cost sensitive / non-proprietary / non-military products in China.

To maintain its leadership position, Marlow invests heavily in R&D to continually provide innovative and advanced solutions. The company’s engineering and research and development arm works closely with new and potential customers to create customized thermoelectric solutions to meet their needs and optimize the performance of their applications.

One of the firm’s most high-profile jobs are thermoelectric cooling devices that allows cameras on the modified Hubbell space telescope to look out deeper in space in several wavelength spectrums. Devices made by Marlow Industries are used in every satellite and aboard the space shuttle and space station. Also, the rapidly increasing commercial development of work with DNA cyclers – in which thermoelectric coolers are a key component – has been a major source of new revenue for the firm in recent years.

In addition, the national defense buildup – which started when President George W. Bush took office in 2001 and accelerated after the Sept. 11 terror attacks that year and the military showdown in Iraq – has played a key role in picking up the slack due to the telecom slowdown. Because of the diverse customer base of Marlow Industries, Nickerson likes where the company is positioned.

Says Nickerson: “Those companies that use difficult times to reinvent and improve themselves and their technology will be in an ideal position to capture future opportunities. As thermoelectric technology improves both in terms of performance and miniaturization many new high demand applications will evolve. We will continue to increase our focus on the customer, push the limits of technology, and continually introduce high quality innovative solutions.”