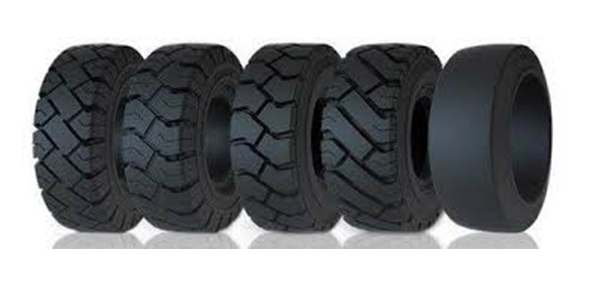 Solideal is a tire company specializing in material handling and construction of off-road vehicles, and it’s also not afraid to veer off the well-worn path when it comes to its approach to winning new business.

Although the worldwide firm has been a leader in forklift tire manufacturing for more than two decades, including its own 1,000-acre rubber plantation in Sri Lanka for making its own latex, it has also focused heavily here in North America on becoming a construction tire distributor. And when Solideal saw an increasing number of its construction customers moving toward tracked systems, it became a leading maker of those as well.

As an increasing number of excavators or the small loaders used on construction sites and by homeowners were introduced with tracked systems in the late 1990s, Solideal aggressively stepped up its efforts in this area, increasing its business more than four-fold in just a few short years. The market grew as customers learned that tracks provide at least 100 percent more traction than tires and can pull more weight than machines with tires as well.

“It’s really a trend in more of the urban areas where density requires the use of narrower vehicles,” explained Solideal’s Jerome Horowitz. In addition, he said that Solideal’s construction customers found that the use of tracks greatly reduced the ground pressure and thus caused less disturbance of the site, another major benefit when building on tight city lots.

Roots in Sri Lanka
“We jumped on that trend,” added Horowitz, who is based in Toronto and heads up marketing efforts for the European-based company. “We were primarily a tire company, and we saw the future in the construction business and felt that was where we had to go.”

Solideal has grown dramatically for a company that is barely two decades old. The firm was founded in 1985 with its main base of production in Sri Lanka, which is where two Belgian investors, engineer Pierre Pringiers, and Philippe Danneels, mapped out an opportunity to make products for the growing forklift market based upon natural materials that would last longer and perform better than synthetics.

Today, the company operates five separate facilities in Sri Lanka, which is where the firm’s increasing track-manufacturing business is centered, as well as plants in China, Serbia and here in the United States in Muscle Shoals, Ala., where Solideal has manufactured polyurethane tires and related products for several years. The worldwide firm is headquartered in Luxembourg.

Here in North America, Solideal arrived largely as an importer of its tires, but the firm quickly shifted its focus into building a distribution network typically through buying ownership stakes in existing dealers. Over time, the majority of these distributorships have changed over to the Solideal name. The most recent changeover has been the Canadian side of the business, which until recently operated under the name of Unitrac.

Horowitz said that Solideal has largely succeeded in its goal of locating tire distribution centers in or close to most major urban markets where there is a large amount of industrial activity and construction work. Approximately 400 people work for Solideal here in North America, The firm’s locations include Tampa, Orlando, Philadelphia, Boston, Los Angeles, New Orleans, Charlotte, Indianapolis, Minneapolis, and more than a dozen other major metro areas.

Quick turnaround
All of its distribution sites feature state-of-the-art equipment. Many of the commercial centers offers foam-filling of pneumatic tires on a 24-hour turnaround basis, tire mounting and press-on services, and mobile service trucks that can handle most solid forklift tires, “Our commitment is to be in the service business for our customers, and so we have to go where manufacturing and industrial operations areas are,” Horowitz explained.

Solideal specializes in two different sectors: fork lifts and off-road construction vehicles. On the construction side, the firm’s roster of OEM customers includes industry giants Case New Holland and John Deere. In addition, the company has introduced groundbreaking new products like Solideal’s Over-the-Tire Track, which helps customers retrofit existing equipment to achieve many of the benefits of a tracked vehicle without buying a new piece of equipment.

On the forklift side of the business, Solideal works with a virtual who’s who of the industry, including Nissan, Komatsu, and Toyota. In recent years, Horowitz explained, Solideal has worked more carefully with these customers to develop customized solutions for them, as they seek more specialized tires that will best combine cost and tire life while reducing forklift downtime. For example, Solideal recently worked with Nissan to develop a special high-load tire.

“On the forklift side, the trend is that the OEMs are designing equipment that is more dependable and built for longer runs, and heavier loads, et cetera,” Horowitz said. “We are constantly developing compounds and tire designs that meet these heavy-duty applications.”

Horowitz said that a lot of the company’s growth has been fueled by that approach of offering comprehensive solutions to its main customers, rather than just entering the market by trying to compete on price. “The OEMs, in some cases we’ve seen, don’t necessarily consider the tire when designing the machine,” he said.

Eliminating tire marks
One innovation that the company has just introduced is its newest compound for non-marking tires that will not leave any tread marks inside a company’s facility. Solideal was already the industry leader in this segment of the market, but its newer compound offers even longer tire life, as well as less rolling resistance.

Horowitz said that the new generation of non-marking tires offers a number of benefits to the end users, not only saving maintenance costs by not having to clear and remove tire marks but also making equipment more energy efficient and less likely to break down because they can withstand more heat. Said Horowitz: “We’re always trying to add more value for the customers.”

Despite a long period of economic growth, Solideal sees a lot of opportunity over the next few years, especially in the forklift market, because companies in North America are reducing warehouse and distribution costs through greater productivity. “Solideal is a market leader through constant listening and response to market conditions,” Horowitz said. “While we continue to grow, we pride ourselves in being responsive to markets and needs.”

In fact, Solideal is one tire company that seems to know no boundaries.