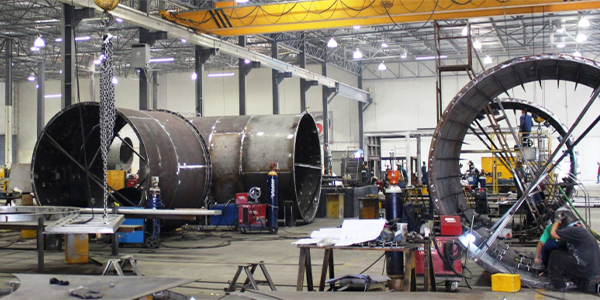 hen Arnulfo Cabello Sr. founded Equipos Metálicos Industriales, S.A. de C.V. (EMISA) in 1969, the company had a regional vision for a one product: metal containers for fluids. The company worked many years for Mexican government agencies such as the Secretariat of Commerce and Transport, the Electric Energy Commission and Petróleos Mexicanos.

The family founded Equipos Inoxidables del Norte, S.A. de C.V. (EQUINOX) in 1982, specializing in stainless steel products for the chemical, pharmaceutical and food industries. With the support of Belgium know how, the company began producing a different type of steel to cover more specialized market niches with higher returns. An investment of $800,000 allowed the company to acquire new technology and build a plant with vanguard layout and advanced infrastructure.

“At the time, the plant layout was a model for this industry type in Mexico. The design was flexible, without support columns, high ceilings, and the office modules were oriented towards the plant,” said Alejandro Cabello, member of the directors bureau. The company was able to achieve more precise standards and specifications in products such as reactors for chemical products, heat interchangers, pasteurization equipment, and processing equipment for production lines.

According to Cabello, major customers such as Peñoles, Lala and Renault Motor Plant propelled the company with contracts and commercial support. However, a turning point was its first export contract, with the participation of the Mexican Trade Commission. “We booked a visit with entrepreneurs in Chicago in 1991, and we negotiated important contracts with Continental Equipment Co. in Milwaukee, Wis. and Phillips Equipment Systems in Rosemont, Ill., which became the medullar structure of our operation,” said Cabello.

In 1998, General Electric USA became part of the company’s portfolio, again through the Mexican Trade Commission and the Secretariat of Commerce and Industrial Promotion. The agency organized a national suppliers’ conference in which EQUINOX was able to negotiate contracts with GE Power Systems, GE Energy and GE Aero-energy Products. Main products were acoustic enclosures for industrial turbines and electric generators. “Those contracts changed our vision regarding our capabilities,” said Cabello. Today, the company exports 97 percent of its production, and has created a well of opportunity in complementary activities.

CINSA was born as a key supplier of concrete equipment including ready mixers, pumps for concrete, excavators, batching plants, Spritz machines, spare parts and components, pipes for concrete pumping purposes, hydrostatics, and control cables in a wide variety of brands, sizes, materials and applications. “We offer customized solutions to individual requirements under one roof in Mexico. We maintain online system upgrades of our in-house inventories, providing our customers with modern integrated electronic and business technologies that cover our daily operations,” he added. The company operates from modern facilities, including a warehouse complex, in Gomez Palacio, Durango.

A natural development within the company’s operations was the transport division, founded in 1998. The company needed to ensure and preserve delivery of sophisticated equipment at a very competitive cost. The idea was to bring integral solutions to customers, and avoid transport deterioration, increasing fleet cost and delayed deliveries.

In addition, Grupo ACV formed the carbon steel and the aluminum divisions that manufacture filter housing, neutral and line side cubicles, turbine gauge panels, reservoir tanks, transition throats, dust collectors and transformer tanks for power systems and other applications. The concrete mixer parts division fabricate a diversified line of products in use and size, from a MTM cab control for concrete transit mixer to a ZF MTM replacement drum.

In 2005, the group created Manufacturing & Industrial Services, (MSI) a new industrial equipment manufacturing and distribution division for the export market. MSI offers high precision machining, plate rolling and bending, cutting, marking on a laser or water-jet system in practically any material. MSI was born to answer requirements for world class manufacturing at competitive prices. The company offers its own materials and part specifications or can maquila customers’ specific products and parts.

FAMILY ACTIVITY
“Around 1998, the company was acquired by one side of the family. My father passed away, and my mother, Luisa Elena Guerrero de Cabello became president of the board. We, the third generation, came aboard to continue with my grandfather’s vision,” said Cabello.

The new board includes family members and external advisors, to keep the company on track with internal audits. A new master plan was developed with specific goals regarding new products and new trends.

According to the CEO, the metal mechanic is a cyclical market with usually foreseeable peaks and depths. During 1999 to 2001, the electric energy generation industry boomed amid the U.S. deregulated market. “However,” he said, “the conjunction of three factors abruptly stopped the industry jubilee, starting with the disintegration of the U.S. economy, the attacks of 9/11, and the Enron scandal, which affected companies such as Siemens, Westinghouse and Mitsubishi.” The domino effect pulled down companies like Grupo ACV, which nevertheless managed to navigate the market turmoil, falling back on other areas of the group.

The company experienced a substantial growth of 250 percent in 2001, but it decreased to two digits afterwards, reaching 50 percent in 2002 and 18 percent in 2005. Lesson learned, Cabello believes the company’s path to success depends on diversification of product and customer portfolios within the industry. “Depending on only one industrial segment is risky, and creates financial vulnerability. Our five-year master plan contemplates focusing on other segments such as construction, water treatment plants and generation of electric energy,” said Cabello. “The inclusion of a variety of customers and industrial segments in a healthy mix would provide the necessary dynamism to keep the company growing.”

Looking for dynamic markets is also a strategy to follow. United States, Canada as well as South American countries are markets that offer good opportunities for Grupo ACV because their governments allow free exploitation of resources, while the energy system in Mexico is interrelated, prohibiting deregulation attempts, which are unconstitutional in the republic.

Lastly, Cabello believes that the company has a productive structure that is cost effective and geographically sound to approach these markets. Suppliers in Western Europe such as Hungry, Rumania, and the Czech Republic, and lately in China and India, are serious competitors but lack the ability to respond with the advantages of offering integral solutions to specific demands in a timely manner as Grupo ACV does.

The group defined its leading role in the international market by pursuing ISO: 9000 certifications for its plants. “Our clients do not demand these standards, but we like to anticipate their needs by working with international standards that create credibility and support our products and processes,” said Cabello. Standard ISO 9001:2000 was achieved for the headquarters located in Gómez Palacio, Durango, for the paint, sandblast, fabrication and purchasing divisions. In 2005, ACV was certified by and became a member of the American Welding Society (AWS). The group also is on its way to achieving the ISO: 14000 certification in an effort to sustain global development.

“Our company started with eight employees producing five tons a month, and has now 800 operators, with a line installed capacity of 20,000 square meters, and a production of 500 tons monthly. Although we are a middle size enterprise, we will continue to diversify our portfolios in order to serve our current clients needs, and generate new ones. We are a company committed to quality, and have been recognized in several occasions with national and international awards,” he concluded.

Grupo ACV was justly recognized as the best middle size export company in 2002 by the President of the republic, and as Emerging Supplier in Orlando, Fla. in 2002. This speaks volumes for the way in which the company has grown into an industry leader and for its prosperous future.