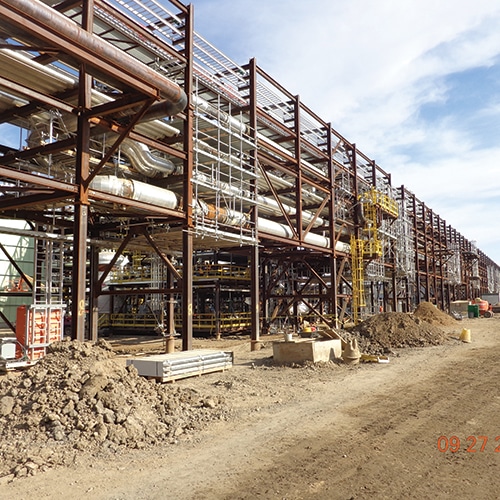 Just look at the projects it has played a large part in. For instance, take a glance at Eighth Avenue Place in Calgary.

The prestigious, $1 billion real estate project includes the erection of a futuristic 51-story office tower in the center of the city’s financial district. Its sloping architectural design, officials say, is metaphoric of the Rocky Mountains.

The building, which received a LEED CS platinum certification and comprises 12,000 tons of structural steel, is also symbolic of Supermétal’s strength in cutting-edge innovation.

“We were the first to get certification from the Canadian Welding Bureau to do robotic welding of rebars,” recalls Sylvie Boulanger, the company’s vice president of technical marketing. “In this case, we innovated how to weld the rebars on the hundreds of steel links to be embedded in the concrete.”

Supermétal completed the first phase of construction, which included the said East Tower, a commercial space of 55,000 square feet, an interior winter garden, an exterior park and plaza, and parking for nearly 1,200 vehicles.

Typically, Supermétal obtains raw materials such as steel beams, plates, angles and tubes from steel mills and suppliers. The steel components are engineered, detailed and fitted. During production, they are sheared, plasma cut, drilled and welded into assemblies with numerically controlled equipment.

At the end of fabrication, all assemblies – large and small beams, support elements and long-span components such as trusses – are shipped to the jobsite, which require a supremely reliable tracking system.

That’s another process Supermétal excels in, Boulanger says. “Because we transport assemblies to jobsites from coast to coast, to remote Nordic locations and congested downtowns, we have developed efficient traceability and transport systems,” she says.

It was particularly valuable during the said Eighth Avenue Project. “We also get high marks for our tracking records from industrial project auditors and we have a patent pending on one of our transport systems.”

Here’s an example, Boulanger says: An erector that was installing steel fabricated by Supermétal once called in claiming an item was missing from the worksite’s package. Boulanger says Supermétal quickly responded by “looking into our system.” The much needed item was onsite, she remembers.

“We said, ‘No, it should be on car so and so, and it was delivered at this time and be near the bottom of this stack,’” Boulanger recalls. “They went back, looked, and said, ‘you’re right. Somebody moved it and put it at the back of the yard.’ Most companies would just fabricate a new piece and then send it out. But that wastes time – and efficiency.”

Our approach towards monitoring and control includes barcode labels, a central database and an elaborate numbering system, that allow production and site managers to instantly identify and track any piece through scanning.

Supermétal is currently implementing the next generation management information system technology with AceCad. After developing and maintaining an in-house program for over 20 years, Supermétal has adopted StruM.I.S. to provide a more seamless flow of information between engineering, procurement and fabrication, across all sites, in two languages and for several currencies.

“When you build for the oil sands, iron ore, nickel, potash and hydropower sectors, you have to be fully integrated and constantly on the look-out for improvements.”

“Traceability and transport efficiencies are some of the reasons we’re able to be competitive in many sectors and across several geographical markets whether we fabricate in Quebec, Alberta or South Carolina,” Boulanger says. “To our knowledge, we were also the first fabricator in North America to obtain the 3 certifications: ISO 9001 (Quality), ISO 140001 (Environment), and OSHAS 180001 (Safety).”

“Our expertise in the industrial sector is historical, and has allowed us to venture into complex commercial and institutional work,” Boulanger says. “The demands are always so high, and yet we continue to flourish. Our company’s path and timeline reflect that.”

A Familiar Story: How It All Started In A Garage
There’s a long list of renowned companies that reported started in a garage of some sort. Think Apple, Google and Amazon, for instance. Maglite, Lotus, and Hewlett-Packard also come to mind.

Incorporated in 1959 “with $75 in a bank account” as an ornamental metalwork company operating out of a small garage in a residential neighborhood, its founders worked on a variety of small projects before landing its first big-time assignment, in the Quebec suburb of Montmorency.

The task? Construct a public metal staircase that climbed the side of a hill and connected a pair of streets for pedestrian use. “It was the first major project.”

Proceeds from the early projects were invested in the construction of Supermétal’s first plant, in an industrial sector of Vanier, Quebec, which was expanded time and again through that decade and the following decade. Its largest expansion occurred in 1979.

Boulanger says the company also became more involved in structural steel projects during the 1960s and less on ornamental metal projects. “In addition to building the size of Supermétal, we also developed a very strong reputation for quality and service,” Boulanger says.

By the end of the 1970s, Supermétal had established itself as a full-fledged regional leader in fabricating and erecting steel. As a result, demand skyrocketed. But the Vanier plant no longer had room to expand. A new plant, at a site across the St. Lawrence River, in St. Romuald, near Quebec City, was subsequently purchased.

The new 800,000-square-foot facility was certainly more modern, with moderately easy access to highways, rail yards, and docks. It’s doubled in size in the years since. Between 1996 and 2001, more than $5 million were invested to expand its size, efficiency, and capabilities.

The investment has paid off handsomely. Just look around the North American continent, where various projects Supermétal has participated in are sprinkled all around, Boulanger says.

The company is 55-years old today. How rare is that? Very, Boulanger says.

Consider this: only 34 percent of companies in Quebec make it past five years in business, according to the company’s website. The median life expectancy of all companies is a mere 13 years.

And yet, even after a half-decade of industrial life, Supermétal is still going strong – and venturing into new industrial areas. Case in point: Boulanger says Supermétal entered the flourishing pulp and paper sector in the mid-1980s, which was “really instrumental in better establishing” its industrial reputation.

“This company started with two brothers,” Boulanger says, referring to founders Léonce and Gérard Bouchard, “and if we fast-forward to 2014, we’re now in our third generation of owners.”

That’s exceptionally rare, statistics show. In fact, Supermétal officials say 70 percent of family-run companies do not survive past the second generation, and 90 percent do not make it past the third generation. That, of course, will not be the case at Supermétal, Boulanger says.

“I mean, what’s really interesting about our story is how you see a majority of firms that don’t survive pass the second or even first generation of ownership, and we’re still doing so well entering our third generation. There are now five co-owners who work in the company
every day.”

The Manufacturing Magic Behind The Steel Curtains
Some statistics indicate that 98 percent of Canadian companies have fewer than 100 employees. Supermétal now has more than 500.

The bulk of those employees are spread across four different plants – a pair in Quebec, in St. Romuald and Sherbrooke, plus one in Leduc, in Edmonton, Alberta, and one in the U.S., in Rock Hill, South Carolina, the youngest, which opened in 2011. There is also a Construction Division in Alberta, a sales office in Alabama and a detailing facility in the Philippines.

Combined, the plants have an annual capacity of 60,000 tons, and each plays a complementary role in the company’s well-reported manufacturing growth.

St. Romuald is the oldest and most versatile, and accommodates a variety of structures. The Sherbrooke plant handles the fabrication of heavy assemblies such as transfer girders, bridge spans and trusses. Cranes have a lifting capacity greater than 100 tons. Leduc specializes in modules and services the oils and industry. Rock Hill has large working areas for handling high volume and includes an impressive paint facility.

“We are the total package, a one-stop shop for our clients,” Boulanger says. “We really focus on the total cost to the owner and being able to provide every phase of production necessary, from the engineering and the detailing, to the fabrication and installation. It is a complete service not everyone can provide.”

Supermétal utilizes 3D modeling in all of its projects, Boulanger adds.

“We encourage our clients to use our 3D model to approve drawings and modifications, and interact with the structure,” she says. “Not many companies use 3D modeling and push it to that extent in their process or incorporate clash detection and erection sequencing. In a potash project, we’ve been able to shave several weeks off the schedule thanks to the advanced use of the 3D model.”

Supermétal recognizes that change is ubiquitous. “The extent by which we have been able to integrate change management into our business model differentiates us from our competitors.”

For example, at the beginning of a project, the engineering team raises flags on potential issues before they develop into complicated changes downstream. “On a project involving 10 stacked 135 ft long full-storey trusses, we anticipated the need for more camber than was specified through discussions with the engineer, avoiding major fixes on site.”

If surprises occur, Supermétal reacts to find a solution. “On an iron ore job site up North, several large cantilevered trusses started to tilt on the existing building! Within 24 hours, we were on site with hydraulic jacks to position the trusses back into position. We were pro-active.”

“We handle a lot of complex work,” Boulanger says. “We have an in-house staff of roughly 60 detailers.” Counting affiliates, that number balloons to more than 80 detailers, all of whom use 3D software to produce:

Consequently, Supermétal has worked with many of the biggest and most well-known engineering firms and general contractors in North America. “And we get repeat business especially when clients are faced with challenging structures,” Boulanger says.

What The Future Brings
Following the completion of many expansion undertakings since the turn of the century, Supermétal has put itself in a strategic position to expand its geographic presence, production capacity, quality of service and safety performance in the years to come.

“Our resourcefulness will continue to be attractive to clients. One project manager said he breathed better when he saw Supermétal had been selected for the job” Boulanger comments. “You could say we contribute positively to a client’s risk management plan by adopting the mindset of a partner.”

“On a petroleum project, the client introduced us as their partner to the general contractor. Needless to say we performed extremely well for that client.” Boulanger concludes that “Supermétal will continue to push the innovation envelope, to apply total cost thinking and to develop its integrated approach for enhanced client experience and improved project performance.”