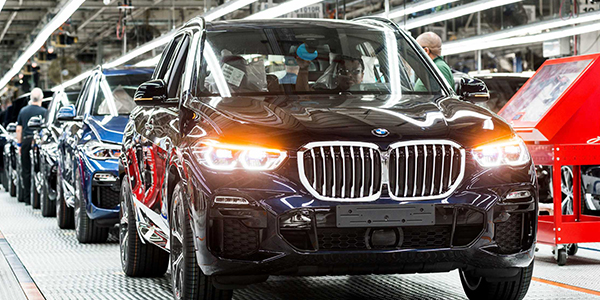 In October 2002, Joe Marchese became the proud owner of a Z4 roadster – a significant event in the New York City resident’s life, and an equally notable one for BMW Manufacturing Corp. of Spartanburg, S.C.

Marchese, selected randomly from more than 100,000 entrants of BMW’s “Owners Count” brand-loyalty giveaway, was flown to Spartanburg to receive the factory’s first Z4 hot off the production line. He commented that it was “great to be the first Z4 owner.” His hosts at BMW Manufacturing beamed as bright as their newly produced luxury vehicle.

Having been 10 years at its U.S. manufacturing location, BMW Manufacturing also was marking a milestone of sorts: A month before Marchese hit the road in his new motor car, the company had unveiled its Z4 at the Paris Auto Show, simultaneously announcing a $400 million investment in its South Carolina facility, an expansion that would create 400 additional jobs, increasing employment at the factory to more than 4,700. Reaching out to the community in big and small ways, BMW had fully arrived on U.S. shores.

Production promulgators
The trail leading to South Carolina began when BMW Group, a company with roots in the manufacture of aircraft engines, started to realize that while its sales reach was global, manufacturing was more efficiently undertaken on a regional basis. With factories primarily in Southern Germany, BMW Group launched a planning committee that looked at more than 300 sites as prospective manufacturing locations before setting its vision on Spartanburg County, an upstate region that had an eager workforce, many with manufacturing experience. South Carolina also had a statewide Technical Education System that was seen as key to developing a qualified workforce. Spartanburg itself was in close proximity to necessary transportation facilities, such as an interstate highway system and rail to the deepwater port in Charleston, and its centralized location in the Southeast benefited distribution to BMW dealerships. That the U.S. market was the company’s second largest helped to cement the decision to locate in the states.

From that point, BMW Manufacturing – which produces the X5 sports activity vehicle and Z4 roadster – has seen a steady increase in production, in factory space, in the number of people it employs and in the number of its suppliers relocating to within driving distance of the plant. The facility produces an average of 250,000 units a year, employs 4,700 people, measures 2.4 million square feet and occupies roughly 30 percent of its 1,039 acres. As the first full manufacturing facility outside of Germany, it has the added distinction of being part of a much larger demographic phenomenon. DaimlerChrysler, Ford, Nissan and Toyota are among the automotive heavyweights that have set up shop in a corridor encompassing Tennessee, Alabama, Kentucky, Georgia, and Texas and which now has received the notoriety of being called “Detroit South.”

At the time the expansion announcement was made, Dr. Helmut Leube, president of BMW Manufacturing, had said, “Our decision to place our U.S. plant in South Carolina has proven to be a successful one as we strive to keep up with customer demand for our X5 sports activity vehicle and begin to build the new Z4 roadster.” It also was envisioned that the increased capacity would help achieve the BMW Group’s goal of increasing worldwide production from about one million to 1.3 million vehicles by 2007.

In its corner of the world, BMW Manufacturing’s Spartanburg County factory has been described an integral part of the company’s global production network; in 2001, one out of six BMWs sold throughout the world was produced at the South Carolina facility.

“We have been in a constant state of growth since we opened,” comments Bunny S. Richardson, assistant manager of media relations at BMW Manufacturing Corp. “Since 1994 we have doubled in size. We are a full manufacturing plant which allows us to meet very high quality and production standards.”

The plant’s associates, she adds, “are proud to be building a car with the engineering and quality standards of BMW. Having everything under one roof enables everyone to communicate effectively. They can see the finished product, which gives a sense of ownership with the vehicle.”

A tale of two cars
In its state-of-the-art facilities, including an automated paint shop and body shop, BMW Manufacturing’s capable workforce produces two of the most recognized and valued automobile product lines on the market: the X5 activity vehicle and Z4 roadster. Both are delivered to more than 120 markets worldwide.

The X5 was named the safest vehicle ever tested in 2000 by the Insurance Institute for Highway Safety, and earned the highest rating the institute has ever given a vehicle of any type or price range. The X5 is the first sports activity vehicle (SAV), combining the powerful acceleration and exceptional handling of a car with the advanced traction technologies and all-wheel drive of an SUV. The first X5 rolled off the production lines in Sept. 1, 1999.

The Z4 is described as “a modern interpretation of the classic roadster.” It is a completely redesigned successor to the Z3 roadster that gained fame in 1995 as James Bond’s company car in “Goldeneye.” The Z4 features a long and sweeping hood, a long wheelbase, short overhangs, and a low seating position in a cockpit that is set back. The MSRP is $33,795 for the Z4 roadster 2.5i and $40,945 for the Z4 roadster 3.0i.

Partnerships with people
At the time of its additional investment announcement, BMW Manufacturing further instilled itself as a good corporate citizen, announcing the establishment of a $10 million endowment at Clemson University for a graduate-engineering program to offer masters and doctoral degrees in automotive engineering. An investment in both BMW Manufacturing and its environs, the endowment has helped to solidify the company’s role as a good neighbor, a role perpetuated by an overarching mission to partner with communities and residents as well as its supplier base.

“When we located here, there were thousands of people with manufacturing experience and skills that could easily be adapted to building vehicles, ” Richardson says. These people not only comprise the bounty for BMW Manufacturing’s production but for its extensive supplier base as well. Of the operation’s 40 suppliers in South Carolina, 31 were attracted to the area to partner with BMW. BMW’s investment in South Carolina has helped create more than 16,650 jobs in the state and the plant maintains a job multiplier of 3.9, meaning for every job created at the plant, nearly three more jobs are created throughout the state.

As an in-sequence manufacturer, BMW relies heavily on a close supplier network. Adds Richardson, “We encourage our suppliers to locate within a few hours of our plant.”

So in sync is BMW Manufacturing with its suppliers that the company recently received Automotive News’ Suppliers Choice Award, given to automakers and OEMs who best encourage and foster supplier innovation as part of its total business plan.
Reaching out beyond its site, BMW Manufacturing reinvests in other ways in its surrounding communities. Anderson, Greenville, Laurens and Spartanburg counties receive over $2.4 million dollars in annual funding while the school districts in these counties receive over $3.1 million. The BMW Charity Pro Am Golf Tournament is just one example of how BMW has been able to encourage and participate in good corporate citizenship. This PGA TOUR event is not only great entertainment but the tournament has raised more than $1 million for dozens of local charities since its inaugural event in 2001.

All this is proof that the company’s decision to locate in South Carolina, while strategic in its focus, resulted in something more symbiotic, a fusion of the company, the community and the car. As BMW Manufacturing Corp. grows even further, the reach of its effectiveness no doubt will more extensively influence the region’s economic and social structure.